Please ensure Javascript is enabled for purposes of website accessibility
Free Article Join Over 1 Million Premium Members And Get More In-Depth Stock Guidance and Research
By Jessica Alling - Mar 30, 2014 at 9:30AM

New data suggests that having more women in the workforce is a driving factor for GDP growth.

There's no denying that the economic recovery following the global recession has been a long, drawn-out affair. But a new study suggests an easy way for countries around the globe to boost their GDP growth -- get more women involved.

International, motivated female
The study, completed by the International Monetary Fund at the behest of its first female leader, Christine Lagarde, found that if countries made it easier for women to participate in the workforce in the same proportion as men, the result would lead to significant growth rates for GDP.

Worldwide, women are either excluded from the paid working force or overexploited through low-wage work in informal settings. Based on the data collected by the IMF, the world's female workforce has stagnated around 50%: 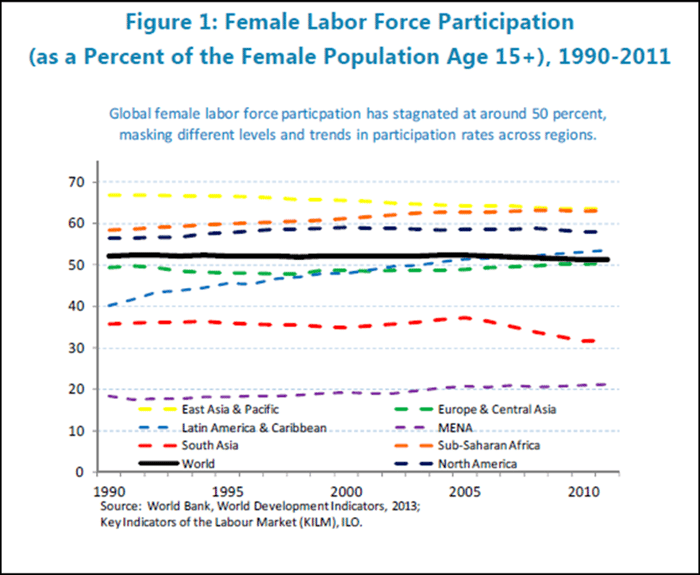 If women had an equal footing with men in the workforce, the study claims that:

That last bullet point is one of the key facts that corporate America has only just begun to fully embrace. Though there are plenty of other facts that affect women's participation in the workforce, encouraging women to join the upper ranks within corporations is only now becoming a widespread trend.

You need women
A separate 2007 study completed by Catalyst.org found that companies that have more female board directors and management members performed better financially than male-dominated firms. Though this is a theme that has been reiterated by other studies from the Financial Times and The Economist, the 2013 Catalyst review of Fortune 500 companies found that there has been little growth for women in top level positions.

Women held only 16.9% of board seats in 2013, making that the eighth year in a row with no significant growth. The year also marked the fourth consecutive featuring stagnation for women in executive officer positions -- with women taking the helm in only 14.6% of the companies.

Though there has been progress in the past few years, with 23 female CEOs being announced at Fortune 500 companies since 2006 (4.6% of F500 CEOs), there's a lot more room for women to advance in the nation's corporations.

It's no longer a "nice to have"
The argument for more women in the workforce and in the top spots of corporations is no longer just a feel-good one, according to the IMF's Lagarde -- there are serious economic implications for every country to consider.

Though there's no quick solution for the problem of slow economic recovery, by promoting equality for women in the workforce, each country has the potential to spark new growth opportunities, sending both personal worth and financial strength higher.

Is 2014's Worst Dow Stock in Danger of a Crash Landing?

Boeing Noses Down as the Dow Rises

Is the Market Right to Fear a Ukraine War? Only if America Gets Involved