Here is the most obvious statement you will read all day: Shares of Plug Power (NASDAQ:PLUG) are expensive. I mean really expensive. Sure, you could convince yourself that you need to pay a premium for an emerging energy technology that has lots of potential in the long run, but how much of a premium should you pay, exactly? Let's put some numbers on paper to see what a long-term investor could actually expect from this fuel cell system manufacturer.

What are we talking about?
Plus Power isn't a "fuel cell" company per se, as many may think. It actually builds fuel cell systems, which are basically a system to take a fuel cell -- manufactured by its suppler Ballard Power Systems (NASDAQ:BLDP)-- and makes them compatible with equipment powered by lead acid batteries. The fuel cells in these systems create electricity from pure hydrogen and create water as a byproduct. So far, it has been able to penetrate one rather niche market -- material handling equipment such as forklifts in warehouses and distribution centers. Over the past several years it has delivered about 4,000 units to companies such as Wal-Mart, Kroger, Coca-Cola, and BMW for its manufacturing and distribution centers.

Plug Power's fuel cell systems are compelling for these companies because they offer two major advantages over traditional batteries: They have a higher energy density and can therefore run longer between charges, and recharging with liquid hydrogen is much faster than charging with electricity. Plug Power is also starting to test the waters in three more markets: refrigeration units for truck trailers, ground support vehicles at airports, and -- quite possibly the largest opportunity -- short-route delivery vehicles.

Plug Power has been thrown into the news cycle recently thanks to a slew of news regarding some large orders and a couple of analyst upgrades. In the past six months, shares climbed to a peak of an absolutely absurd 1,500% and have now "settled" up more than 800% in that time frame.

How to give a value to this company?
Like several of its peers that are developing innovative energy technologies that haven't exactly come into their own, Plug Power doesn't generate a profit. Heck, the company has yet to even post positive EBITDA in 15 years. With that in mind, there is really only one way we can give some sort of valuation to this company, and that is to measure the value assigned to its sales. For this, we'll use the company's price-to-trailing-12-month-sales ratio, which stands today at 31.

Considering how much the company's shares have jumped in the few months, it shouldn't be surprising that revenue growth hasn't been able to catch up. In fact, revenue has declined by 3.6% since 2011. Some of this can be attributed to struggling to gain market share, and some relates to manufacturing capacity. However, the recent order from Wal-Mart for 1,700 units as well as an expansion of its manufacturing facility should help put sales growth back on the right track.

To justify such a premium, there has to be some fantastic growth coming down the pipe. According to S&P Capital IQ, revenue in 2014 is expected to reach nearly triple from 2013 and reach over $65 million. 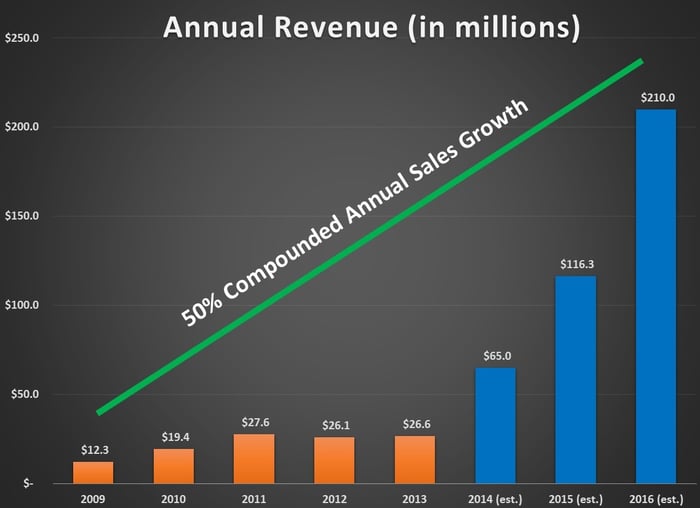 Based on S&P's projections, revenue is expected to grow at a rate of almost 100% over the next three years. To even the most ardent supporter of Plug Power, these figures seem overly optimistic, especially considering that the company's struggles to grow revenue over the past couple of years and that the entire industry is only expected to grow at a rate of 18.9% over the next five years. So let's take these growth figures with a grain of salt. In fact, better make that a bag of salt.

What will it take to grow into its stock price?
It's hard seeing this company being valued at such a premium, which gives shares of the company two options: The price of these shares drops to fall in line with its peers, or the company grows revenue fast enough to make its purchase price worth it. Then again, you probably don't want to buy a company that stays at the same price for several years. Somewhere along the way, those shares need to appreciate.

So let's break it down. The following presentation shows revenue growth the company will need to achieve to both reduce its price-to-sales ratio to levels more in line with its peers just to maintain its current price, and revenue growth numbers for what it would need to achieve compounded annual returns of 8%, 10%, 12%, and 15%, respectively.

What these numbers go to show is that, for the most case, it will take some extraordinary sales growth over the next few years for the company's shares at today's prices to fall in line with its peers. However, if the comapny can sustain a compounded sales growth level of 25% -- very, very ambitious, but considerably less than S&Ps growth numbers -- and its price-to-sales were to fall within the range of its peers over the next decade, then it wouldn't be a stretch to assume that shares could attain a 10%-12% return per year. That would put today's shares of approximately $7 at $18 to $21 10 years from now.

What needs to happen to make this possible?
Owning shares of Plug Power won't exactly be smooth sailing. If the price-to-sales ratio were to fall in line with its peers without a change in revenue, then someone who buys shares today could lose 75%-85% of his or her initial investment. Based on the large orders from Wal-Mart and the pilot studies with FedEx, this scenario doesn't seem very likely.

However, there are some major hurdles that could get in the way as well. Its current manufacturing facility will give it considerable room to grow sales, but it will max out unit sales in the $180 million-to-$200 million range. So within the next couple of years it will need make some significant investments to increase capacity if it wants to continue to grow five to 10 years from now. Also, the company actually needs to make money on these sales. According to company presentations, management estimates EBITDA breakeven at just over $58 million in sales. So it will take a significant ramp-up from today's sales numbers just to reach operational profitability.

What a Fool believes
Price-to-sales isn't exactly the cleanest way to value a company, but when companies like Plug Power don't have any earnings or EBITDA to speak of, there aren't a whole lot of other options. You probably didn't need to see these numbers to realize that Plug Power's share price is wildly disconnected with the current expectations for the company, but hopefully this will give you a more clear picture of what it will take from the company to actually live up to these expectations and what kind of returns you can expect over the next several years. Based on today's price and the potential challenges that Plug Power will face over the next several years to grow sales and become a profitable company, I would probably stay away from these shares until we actually see some tangible sales growth.

What Can You Realistically Expect From Shares of Plug Power in the Future? @themotleyfool #stocks $PLUG $FCEL $BLDP Next Article
Current