With fourth-quarter earnings season now in the books, I thought it was a good time to reflect back on the reports that really stood out. Unfortunately, some companies stood out for the wrong reason, with the following three companies really disappointing me this past quarter. Let's take a closer look at what went wrong.

MLPs like BreitBurn Energy Partners (OTC:BBEPQ) aren't supposed to be hurt by lower commodity prices, but that's just what happened last quarter. Lower oil prices combined with production issues caused the company to really disappoint and completely reverse its recent success. Weakness on the quarter caused the company's distribution to slip to 0.93 times, which is below the minimum desired coverage ratio of 1.0 times.

Most of the company's production issues in the quarter were temporary. Weather, for example, plagued the industry as a whole and is to be expected to impact production from time to time. In addition to that, BreitBurn misjudged production out of its new wells in Texas. But the key here is that it wasn't that the wells are underperforming; it's just taking them longer to fully come online. Now that the company is aware of the problem it can factor that into forward guidance.

The one issue that bears watching is production out of the Postle assets that the company recently acquired from Whiting Petroleum (NYSE:WLL). BreitBurn and Whiting experienced some delays in getting a development project online. While BreitBurn is address the problems, this is an area to watch as the company paid a lot of money to acquire these assets from Whiting just a few months ago, so the recent shortfall is a disappointment to say the least.

Caught off guard
I was pretty surprised by the weakness Vanguard Natural Resources (NASDAQ: VNR) showed this past quarter. While its production was up, its cash-flow generation was down. That caused the company's distribution coverage ratio to join BreitBurn in heading below one. Overall, Vanguard's overage ratio fell from 1.15 times all the way down to 0.88 times as lower realized oil and gas prices affected cash flow.

All that being said, this appears to be a one-time hit for the company. Vanguard Natural Resources sees surging production in 2014 as its acquisition of natural-gas assets in Wyoming marks the company's strategy change to invest in organic production growth. As the following slide shows, the company sees strong economic results from the wells it will drill in that new basin. 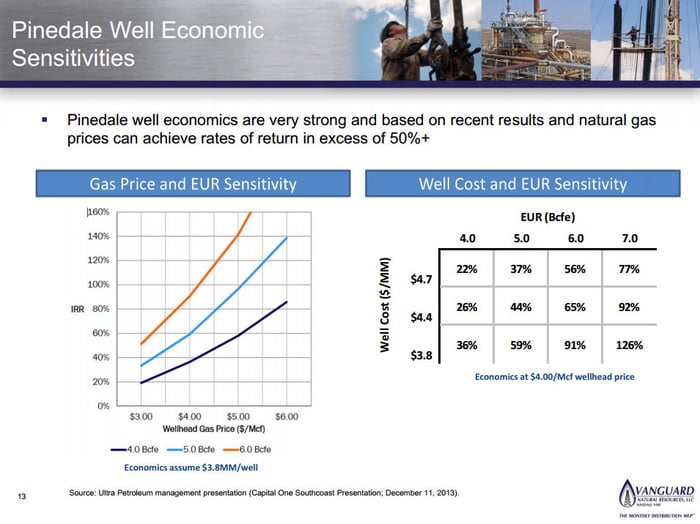 Because of this the company sees that growth fueling a 1.12 times coverage ratio in 2014 at the midpoint of its guidance. So, while this past quarter wasn't impressive, Vanguard looks to be on the right track.

Trouble making the turn
Nuverra Environmental Solutions (NYSE:NESC) has done nothing but disappoint me this year. Last quarter was no different as its quarterly revenue fell over the previous quarter while adjusted EBITDA just barely moved higher. That's not what I expected to see from what looked to be an acquisition-fueled growth company that's providing solutions to one of the energy industry's biggest problems.

While Nuverra looks to be righting the ship by putting its past in the past, it's simply not turning fast enough. That makes 2014 a real make-or-break year for the company. The key will be how well the company's expanded service offerings are received by its customers. As the slide below details, Nuverra's H2O Forward partnership with Halliburton (NYSE:HAL) is expected to begin its first frac job in the first half of this year. 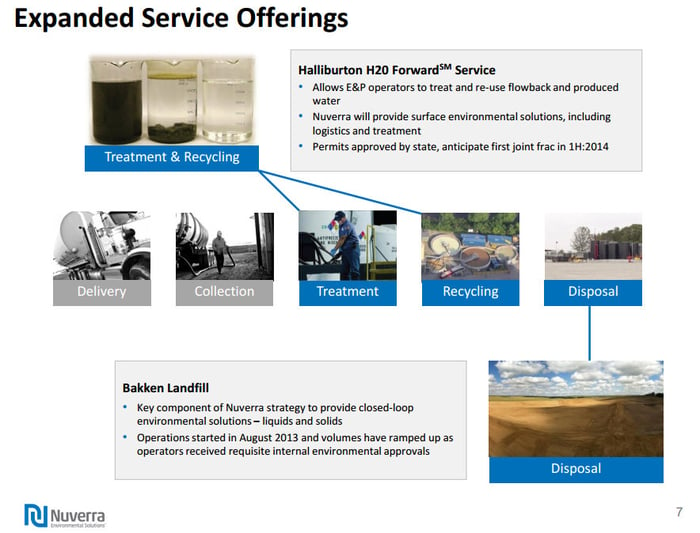 In addition to that key water-recycling partnership with Halliburton, Nuverra is also working to dispose of, or recycle, drilling solids. The company's new landfill in the Bakken is now handling the disposal of these solids, but it will eventually be equipped with a treatment facility that could eventually reduce 30%-50% of the waste by creating beneficial uses of the byproducts of the process. Needless to say, this new solids recycling initiative needs to work well for Nuverra to ever recover.

The next step after initial success is for Nuverra to take this full-cycle recycling and disposal solution nationally so that it can serve producers in all the major shale basins. If it can do that then the prior disappointments will be erased, the only problem is that it's still a very big if at this point.

Investor takeaway
While the distribution coverage ratio of both Vanguard Natural Resources and BreitBurn Energy Partners was disappointing to me last quarter, neither appear to be a long-term concern. Nuverra Environmental Solutions, on the other hand, is a company that I am worried about as it has yet to show that it can turn around what was an awful year.