The world of fuel cells has been abuzz lately, and rightly so. After years and years of losses piling up, this innovative technology is starting to break through with some commercial success. There are still some significant barriers to entry, but one trend that has many fuel cell fans optimistic is the use of biogas as a cheap fuel. While this is a great plan for fuel cell stocks like FuelCell Energy (NASDAQ:FCEL) and Ballard Power Systems (NASDAQ:BLDP) to take advantage of what was once considered a waste product, it may not be the massive growth catalyst many hope for. Let's take a look at why.

A boom from biogas?
Fuel cells, just like every other technological innovation in the energy space, have taken years to develop into a product that can compete against traditional power generation techniques on a cost per unit of energy produced. Even today, the average cost of a fuel cell is still much higher than other sources on a levelized cost of energy, which is a metric that estimates the cost of electricity from a given source based on its up-front capital costs and operating costs. 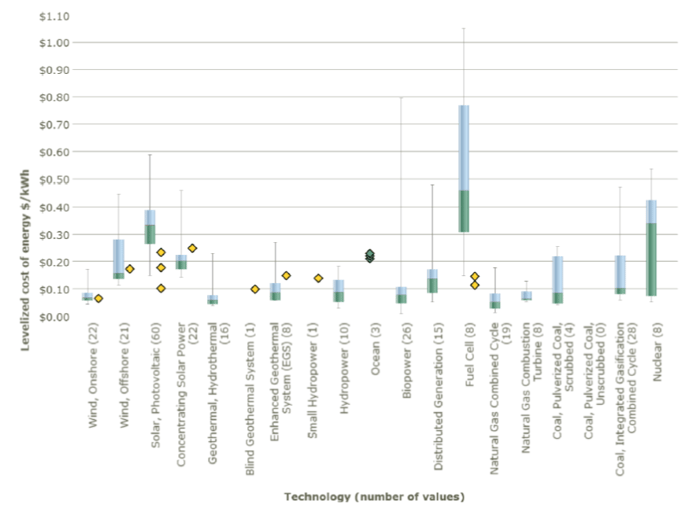 The biggest reason for this is because the capital costs to install them are so high. When compared to its most direct competition, natural gas fired turbines, FuelCell Energy estimates its cells have an up-front cost of about $3,000 per kW, almost triple the average up-front cost for a natural gas turbine. So how can fuel cells compete with these other systems? They need to beat them on the operational cost side, and that is where biogas comes in.

Biogas is methane gas, just like the natural gas that we drill for. The only difference is the source. Biogas comes from the decomposition of human and animal waste from wastewater treatment plants, landfills, farms, etc. For years, biogas was either let off into the atmosphere or piped to a central location and flared off. Recently, though, many have found this to be an extremely cheap source of natural gas. So companies like FuelCell and Ballard have been developing ways for their products to run on biogas to take advantage of the cheap feedstock.

It works, it monetizes a previously thrown away source of energy, and it increases our share of energy that is domestically sourced. It's a win-win across the board.

The challenges
As much promise biogas holds for fuel cells, there are a couple of hurdles that could prevent it from becoming universally adopted.

What a Fool believes
Don't get me wrong: Using biogas as a feedstock for fuel cells or anything else is a magnificent idea and we should utilize it as much as possible. Fuel cells will definitely play into that market, but they will not be the only ones. As manufacturers of fuel cells, both FuelCell Energy and Ballard, will face the same competition in this market as it does using traditional natural gas. The larger goal for both of these companies should remain to bring down the levelized cost of energy for these systems across the board. By doing so, not only will they be able to capture a larger share of the biogas market, but it will enable them to compete in the even larger natural gas market as well.