DDR4 is coming this year. Let's take a look at how it will impact Micron, Samsung, and Intel.

2014 will officially mark the entry of DDR4 memory. Intel's ( INTC 3.10% ) upcoming Haswell-E and Broadwell range, slated for release in the second half of 2014, will be the first desktop processors to support DDR4 memory. On the mobile side, upcoming high-end offerings like the Samsung (NASDAQOTH: SSNLF) Galaxy S5 and Apple iPhone 6 are expected to support LPDDR4 memory.

What does this technical jargon mean, and how will it impact Micron ( MU 4.10% ), Samsung, and Intel? Let's find out.

Significance of DDR4
DDR4 is basically a leaner, meaner, and faster iteration of DDR3 memory. As compared to its older counterpart, the next-gen DDR4 modules contain double the memory banks of relatively smaller size, allowing multi-core processors to access memory locations at a faster rate.

Coupled with a higher operating frequency of 4266 MHz, DDR4 modules deliver a theoretical 100% increase in overall memory bandwidth – illustrated in the chart below. 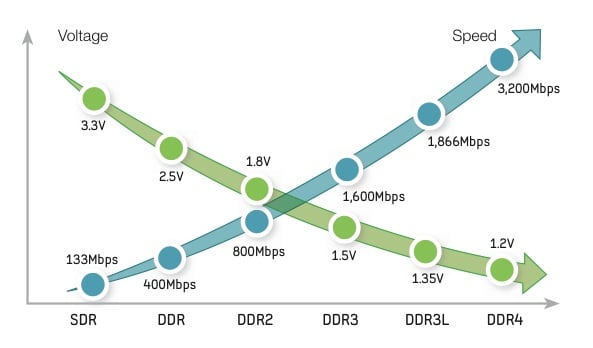 In addition, DDR4 modules make use of Pseudo Open Drain interface. This essentially means that DDR4 modules store logical 1s without incurring much resistance instead of the logical 0s used in DDR3. Consequently, the algorithm contributes in reducing the overall DRAM power consumption by up to 50%.

Mobile devices, on the other hand, will now sport increased battery life cycles. Plus, the relatively lower heat dissipation due to the memory's lower power consumption makes the development of fan-less tablets and ultrabooks a feasible option. In fact, circulating rumors suggest that Apple is currently developing a 12-inch fan-less MacBook Air.

TrendForce is optimistic about the growth of this new memory standard. The research firm estimates that LPDDR4 modules will be produced in limited quantities during 2014, and will entirely replace LPDDR3  modules in 2015. Intel estimates that DDR4 will replace DDR3 by the end of 2015 as well.

DRAM manufacturers
With a major memory upgrade on the cards, I believe Micron and Samsung will be the prime beneficiaries. Where Samsung is the largest DRAM manufacturer, Micron is placed at the second spot. And both the companies, collectively, command a global DRAM market share in excess of 65%.

IHS estimates that DDR4 modules will have a 30% pricing premium over DDR3 modules during 2014. This differential is expected to contract to 10% in 2015. This suggests that leading DDR4 manufacturers -- namely, Micron and Samsung -- will be able to enjoy fat margins over the coming year.

Processor manufacturer
Apart from DRAM manufacturers, I believe Intel stands to benefit greatly as well. Advanced Micro Devices is yet to announce the launch of its DDR4 supported processors, so users will have to switch to either Intel's Haswell-E or Broadwell chips in order to experience the speed of DDR4 memory.

Plus, the launch of fan-less ultrabooks will be a major boost for the chipmaker. Intel is currently the leading ultra-low-voltage x64 processor manufacturer, and a renewed demand for LPDDR4 compatible hardware platforms, will contribute in expanding Intel's mobile market share and propel its top-line growth.

Foolish final thoughts
While DDR4 modules offer an optimistic outlook, their adoption will depend on actual benchmarks and practical pricing. So, investors might want to keep a close eye on these metrics and expose their portfolio accordingly.