The U.S. and Canada have helped the world's biggest farm equipment maker, Deere (NYSE:DE), to grow strong, but being mature markets, sales growth is a concern. On top of that, Deere expects a seasonal 5%-10% contraction in the agricultural machinery sector in the U.S. and Canada in 2014.

This doesn't necessarily mean a lack of opportunities for equipment makers. North America adapts to technological advancements like no other market. Next-generation farm equipment keeps pushing efficiency to new levels with every launch, giving farmers enough reasons to replace equipment more often and generating new sales avenues. Deere holds more than 50% market share in the U.S. and Canada, and wants to defend or even grow that number in years to come. Below are three big steps the company has taken to stay on top of the domestic ag-equipment market.

Deere has regularly launched new and path-breaking products. For 2014, it's introduced the 7R and the 8R/8RT series of tractors that come with the tier-4 engines. The 8R lineup has nine models, and the 7R series that debuted in 2011 has been refreshed with five new models. The three main highlights of these tractors are fuel-efficient tier-4 engines, higher horse power, and Group 49 tires. In February, Deere launched the "revolutionary" ExactEmerge and MaxEmerge planters that can plant at the speed of 10 miles per hour, covering more acres in lesser time with precision metering.

Deere customers can also avail FarmSight services via MyJohnDeere.com. Launched in 2011, FarmSight integrates equipment with technology to provide a complete solution for farmers. A controller collects data from the machine and wirelessly transfers it to a server, which can then be accessed through the JDLink website. Farmers can get real-time information of the cab from their phones, as the JDLink app is available on Android and iOS devices. Such products are taking farming to the next level, and Deere's at the forefront of all the action.

Success with tier-4 compliance
In 2013, Deere made its larger, off-highway engines (174 hp-750 hp) compliant with the more-stringent final tier-4 emission standards set by the Environmental Protection Agency. The standards are a part of the Federal Clean Air Act to combat air pollution, and strive for zero particulate matter and nitrogen oxide emissions in off-road vehicles. Implementation is in a phased manner based on the engine's horsepower.

Manufacturers have struggled to meet tier-4 norms and have passed on the costs via price hikes, but not Deere. It's received the certification well ahead of the 2015 deadline and won customers.

Geoff Stigler, manager of worldwide marketing for John Deere Power Systems, explains, "We began the design process by listening to our customers, and we have worked with them every step of the way to ensure our solutions deliver the industry-leading performance and low operating cost they expect from John Deere." Thus, no surprises that the smooth transition to tier-4 helped Deere ship more than expected in its first quarter ended January.

Rival CNH Industrial has not been so successful. Its dealer, Titan Machinery (NASDAQ:TITN), is reportedly finding it difficult to pass on the price increase of the tier-4-compliant machinery to customers. In the most recent quarter, Titan's agriculture revenue dropped 4% and same-store sales came in 6.5% lower than the same quarter a year ago.

Thrust on modernization and R&D
In order to offer better products that are in line with the latest standards, Deere is consistently investing in facility modernizations, and research and development. The company has modernized and expanded almost all of its U.S. factories in the past few years. Of the six major factory projects under way in the country, expansions at seeding facilities in Moline and Valley City, N.D., are the most significant, entailing enhanced use of robotics and automation. 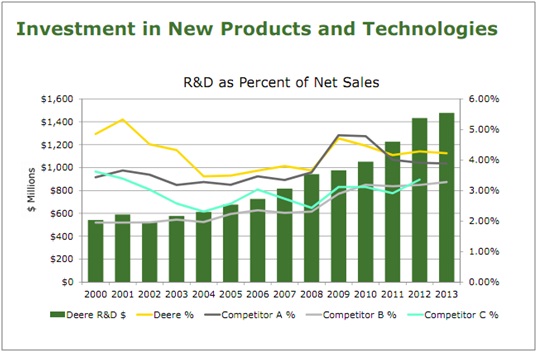 Deere will double the size of the John Deere Technology Innovation Center at the University of Illinois for greater growth. It aims to utilize the university's faculty and student know-how in agriculture, engineering, and IT in a better way. In 2014, modernizing and restructuring factories is an essential part of the capital expenditure plan.

The crux
Deere has a majestic hold over the North American market, unrivaled by Agco or CNH. The behemoth is opening new revenue windows by focusing on new and advanced products and services, compliance, modern manufacturing processes, and research and development. The U.S. and Canada will continue to be the anchor of Deere's global ambitions.