Recent problems at two large American companies were probably once just the tip of the iceberg. What can be seen appears small, but most of the issue lies below the water line, and if left alone can be more expensive and turn deadly.

Design defects in the ignition switch assembly used in vehicles made by General Motors (NYSE:GM) has led to a massive, and growing, recall by the automaker. The company has taken a $300 million charge against earnings to investigate the problem and replace the defective parts. That number could increase even further. Wrongful death and injury lawsuits could proliferate. The company has already settled legal actions with the estates of some victims. The lawyers could have a field day here. And the U.S. government has probably not fully weighed in. Future sales could be affected. There could be even more problems for GM.

Tragically, the most important aspect of this issue is that at least 13 people died as the result of the failure of a very small part within the switch, measuring less than a half-inch, called the detent plunger.

Unless handled in a responsible manner, the problem could dent GM's image and finances. So far CEO Mary Barra and senior managers are tackling it head-on. Whether or not this will mitigate the overall effect remains to be seen.

GM can probably learn a lot from the experiences of Johnson & Johnson (NYSE:JNJ) when it dealt with the Tylenol crisis in 1982. An unknown person tampered with bottles of the over-the-counter medication. Seven people died in the Chicago area as the result of cyanide poisoning. The outcome was that a new system for packaging almost all types of drugs and many food products was developed and is in use today. It also led to the widespread use of caplets, which are more difficult to tamper with than pills. The response by Johnson & Johnson is frequently used as the template by other companies when similar events occur.

Boeing (NYSE:BA) had to deal with fires aboard its latest aircraft, the 787 "Dreamliner," but the problem should have been prevented in development. Grounding of the entire fleet of aircraft led to dissatisfaction by the company's airline customers and the flying public was inconvenienced.

Design to requirements
GM may have known about the switch defect as early as 2001, but according to the best available evidence, failed to address the issue. Good engineering practice includes verifying that all product requirements are achieved during development. It appears that the detent plunger was too short to adequately "do the job," which in this case is to hold the entire switch assembly in the "Run" position and prevent it from going to the "ACC" position. That's the accessory mode when you want to listen to the radio with the engine off. A safety issue arose when several cars turned "off" while moving.

The figure below shows the defective switch on top compared with the intended replacement part, which meets the requirements. 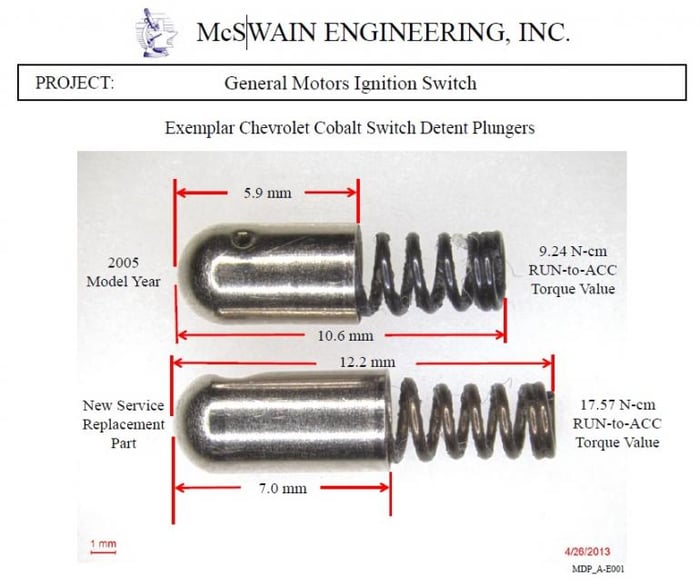 Test to failure
Another good practice, having designed a good product that meets the known requirements, is to test that product to failure before release in order to determine the end effect. If that effect is an undesired event, a redesign can take place and it won't affect customers.

That step might have been missing in the case of the Dreamliner battery issues in 2013. The entire fleet of aircraft was grounded for several months while Boeing and the government investigated and fixed a defect that resulted in fires on some aircraft. It is possible that if Boeing had institued a test-to-failure program, instead of just ensuring that the battery worked ok, the problem could have been discovered in the lab and not in revenue service.

While the problem -- which was addressed by adding a protective shield over the battery, preventing combustible materials from affecting nearby equipment -- probably didn't harm the company's short-term financial results much (revenue, EPS, and the stock price have actually risen since the issue first surfaced) -- in the eyes of some it may tarnish Boeing's image and sales in the long term. Executives of many airlines were incensed and demanded swift action by Boeing. Senior executives and engineers probably logged lots of miles trying to smooth over the rough edges. And competitors such as Airbus might profit down the line and airlines could choose that company's A350 XWB aircraft instead of the Dreamliner.

Foolish conclusion
Problems with "small" parts such as ignition switches and batteries sometimes can turn into much larger issues that can't be seen unless a deep dive is taken before the product is released. Preventing these issues from occurring in the field is a lot less expensive and can save lives.

In the case of GM the inadequate design of a 1/2-inch long part led to several deaths and injuries, a $300 million charge against earnings, untold legal fees, potential government action, and likely lost sales in the long term.

Boeing has had to deal with an aircraft safety event that probably should have been discovered in the lab and not in revenue service. Competitors may seize on the misfortune.