Norwegian oil giant Statoil has been aggressively expanding its operations lately in order to grow outside of Norway. Here are just two ways that the company is doing this.

Norwegian oil giant Statoil ( EQNR -1.72% ) has been strongly focused on expanding its operations internationally over the past few years, largely to compensate for the maturation of its original production base in the Norwegian part of the North Sea and on the Norwegian Continental Shelf.

The award should prove accretive to both Statoil and its partner in this block, ConocoPhilips ( COP -1.33% ). The block awarded to the two companies is a largely unexplored area in a basin with a proven petroleum system and thick sedimentary deposits. This means the block is almost certain to contain oil that can be developed to increase the companies' production levels and revenues.

The AD-10 Block covers more than 9,000 square kilometers and is located approximately 200 miles from the coast of Myanmar. Statoil and ConocoPhilips each have a 50% stake in the block, but Statoil is the operator. As the average water depth in the area is approximately 2,000 meters, the company will need to contract a deepwater or ultra-deepwater rig from a company such as Seadrill ( SDRL ) or Pacific Drilling ( PACD ) in order to explore the area and estimate its production potential.

It will not need this rig right away, however. Statoil said it would perform environmental and social impact studies and acquire new 2-D seismic images before it begins exploring the area. The company expects this process to take approximately two and a half years before it starts a three-year exploration period. Thus, the earliest that Statoil will need the offshore drilling rig is 2017.

Espirito Santo in Brazil
On March 28, Statoil announced that it had received formal approval to enter the Sao Bernardo discovery in the Espirito Santo Basin in Brazil. The company needed to obtain government approval due to the way that it acquired its stake. Basically, Statoil attempted to purchase a 25% stake in the BM-ES-22A Block from Vale ( VALE -0.97% ). 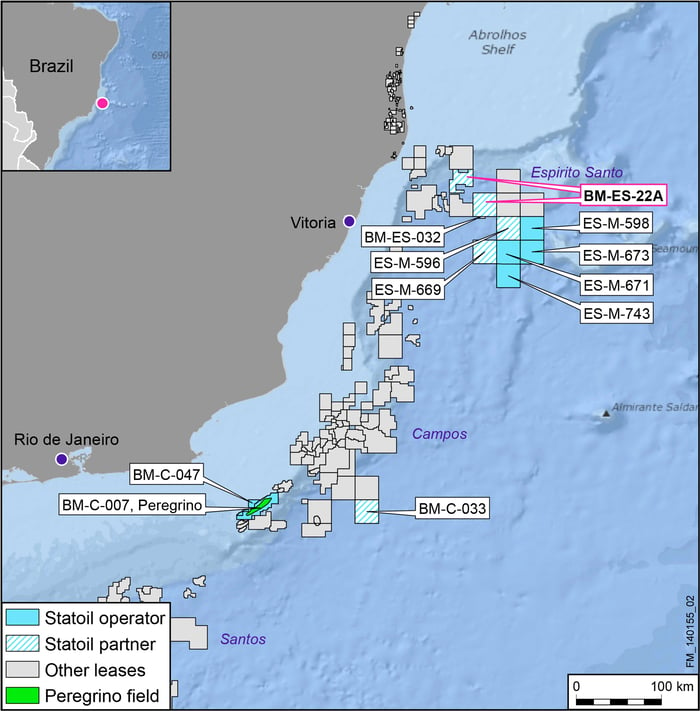 ANP, the Brazilian petroleum industry regulator, delivered its mandatory approval of the deal on March 19. This deal enables Statoil to increase its position in the prolific basin and strengthen its claim to being the largest international operator in Brazil.

Statoil's new acreage contains the Sao Bernardo discovery made in April 2013. This discovery proved the presence of two reservoir levels with 34-36 API oil. Thus, the purchase of this acreage greatly increased Statoil's proved reserves, although it is uncertain exactly how much oil is present at the site at this time.

There is likely much more oil to be found in the Espirito Santo Basin. In 2010, Brazilian national oil company Petrobras ( PBR -0.28% ) discovered light oil at the Indra prospect located in Block BM-ES-032. Statoil has a 40% interest in this block.

In 2013, Petrobras drilled another well at Arjuna in order to appraise the Indra discovery; this well proved that the oil discovered at Indra is part of a massive field that extends the whole way into Block BM-ES-22A, which is the block that Statoil just acquired an interest in. This proves that this is a very oil-rich area; now that Statoil has acquired a 25% stake in BM-ES-22A, it has greatly increased its stake in this zone that will be developed over the coming years.