French oil giant Total (NYSE:TTE) offers one of the best dividend opportunities among all of the large oil companies. This is due to the company's stability, relatively low price, and comparatively high dividend yield. At the time of writing, shares of Total yield 5.09%, which is quite high compared to its big oil peers.

Total SA is a vertically integrated oil and gas company headquartered in France. The company is one of the so-called "supermajors," which were at one time the six-largest oil and gas producers in the world. Some of the other companies in this ground are ExxonMobil (NYSE:XOM), BP (NYSE:BP), and Chevron (NYSE:CVX). Although there are now many more companies that rival these six in size and reach, Total remains a very large company as indicated by its market cap of $156.9 billion at the time of writing.

Stable reserves
In a previous article posted here on The Motley Fool, I discussed the importance of an oil company's reserves in remaining a stable and going concern. Fortunately, Total has enormous reserves. In 2013, Total achieved an excellent reserve replacement rate of 119%. This means that the company discovered more resources than it pulled out of the ground. 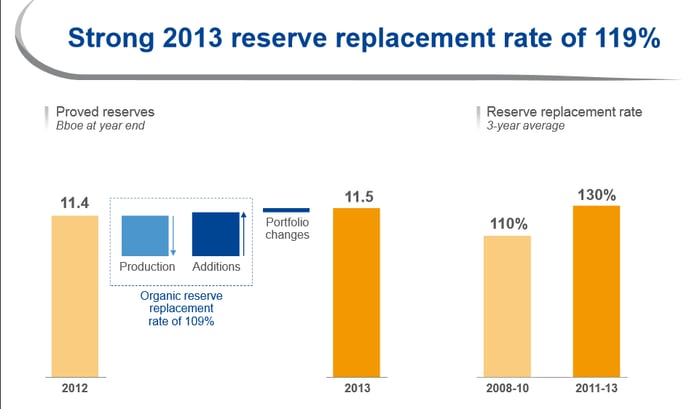 Total's impressive achievements in discovering new resources give it a proved reserve life of more than 13 years. This means that the company could discover no new sources of oil for the next 13 years and continue to produce at its present level solely by using the oil and gas that the company knows is there and is economically viable to extract. This is much better than the reserve lives of many of Total's peers.

Stable earnings
All oil and gas companies see some amount of variability in their revenue and earnings due to the constantly fluctuating price of oil. However, Total did a remarkable job of keeping its production and profits stable in 2013 compared to 2012. This is much better than what its peers achieved. This chart comes directly from Total's 2013 results presentation and shows the year-over-year change in the company's production and adjusted net income relative to peer companies BP, Chevron, ExxonMobil, and Shell. 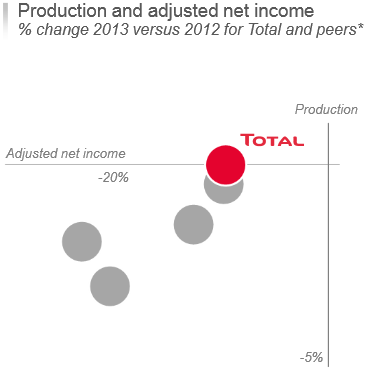 As the chart shows, Total did a much better job keeping its production and adjusted net income stable on a year-over-year basis than did any of its large peers. This is just the sort of thing that should appeal to an income investor.

Slight growth in 2014
Stability is all well and good, but even income investors want some growth from the companies that they are invested in. Fortunately, Total offers this. There are two ways for an oil and gas company to grow its top-line revenue. The first is to sell its oil and gas for a higher price. Unfortunately, oil is a highly fungible commodity whose prices are set by the market with little room for product differentiation. The ability of any private oil company, even one as large as Total, to control its selling price is minimal. Therefore, Total has to sell its oil at the price that the market sets. The second way that an oil company can grow its top-line revenue is to increase its production, and that is exactly what Total plans to do. In 2014, Total expects to grow its oil production by 4% over 2013 levels by ramping up the production from existing projects and by starting new projects. 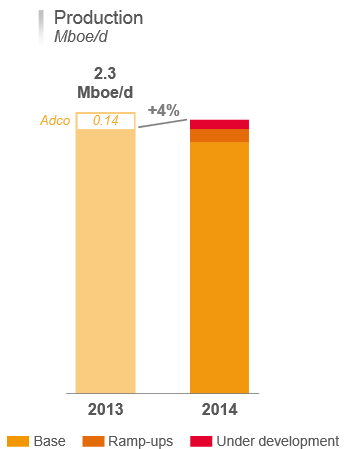 As Total grows its production in 2014, it should also see its revenues and cash flows grow as long as oil prices don't fall enough to offset the positive impact from the increased production.

Value priced
Income investors don't have to pay through the nose to acquire shares of Total. At the time of writing, Total trades at a P/E of 9.92, an EV/EBITDA of 4.74, and a PEG ratio of 1.44.