Brian Anderson
(TheEggCameFirst)
Author Bio
Hi, I'm Brian. The only thing that I love more than cooking and running is investing. I think that with the right combination of intuition and due diligence, we can all make a lot of money by holding stocks.

In order to fill demand when customers make a purchase, most companies prepare their products ahead of time. This is inventory – and sometimes companies prepare too much. The number of cars an automaker chooses to produce in advance, which then sit and wait to be bought, has a big effect on you, the investor.

Inventory affects a company's bottom line, making it a very important item for investors to dig in to. Understanding types and levels of inventory will make you a more informed investor, allowing you to allocate your money to efficient and profitable companies.

Types of inventory
When a company buys materials to make its products, this is called "raw materials" inventory. For example, all of the steel and plastic sitting in Ford (NYSE:F) factories, waiting to be molded into a car door, are raw materials.

After a company begins working with its raw materials but before the product is ready for sale, the "thing" (it's not really just steel and plastic anymore, but they might not be ready to call it a car just yet) is called "work-in-progress" inventory. For example, General Motors (NYSE:GM) might spend 18 hours to build a car, and during this period the cost of all the accompanying parts make up its work-in-progress inventory.

Lastly, the "finished goods" inventory is made up of items ready for distribution and sale. All of the completed cars that Tesla Motors (NASDAQ:TSLA) hasn't made money on yet are finished goods.

Together, these three types of inventories create the overall, general "inventory" category on a company's balance sheet.

Below is a breakdown of the three types of inventory for a single automaker. As you can see, most inventory is in the finished goods stage, and only a small portion are in the work-in-progress stage. 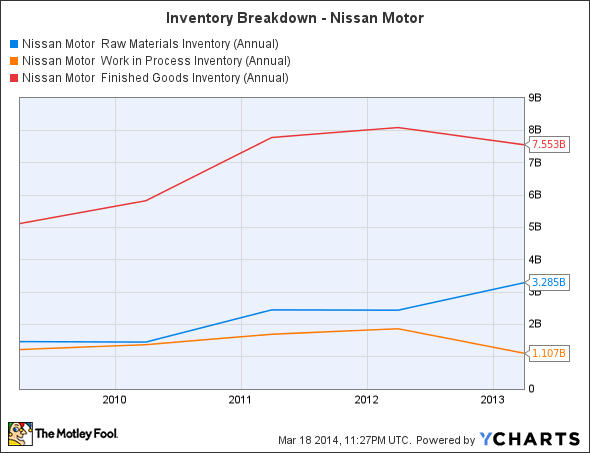 The costs of inventory
There are costs associated with holding inventory, whether as raw materials, work-in-progress, or finished goods.

Consider the insurance that Nissan (OTC:NSANY) pays to secure its warehouse of cars (after all, what if there is a theft or fire?). Additionally, it risks one of its models going out of style after paying to have it built, but before selling it. Automakers also pay handsomely for the costs of owning and maintaining storage space, as well as handling, tracking, and maintaining inventories.

As investors, we'd rather have the company put its wealth (and our wealth) to more productive uses than holding too much inventory.

Levels of inventory
I have written before about the importance of supply chain efficiency for automakers. Basically, materials are relatively expensive in the auto industry. Because of this, our investigation of inventory levels is very relevant for auto investors. Comparing the levels of inventory that several major automakers hold is a good place to start.

If we were to look at balance sheets for each of the four automakers mentioned above, we'd see that GM holds about double the inventory of Ford, Nissan is somewhere in between GM and Ford, and Tesla holds less than 5% of the inventory as the other three.

If everything else about these companies were the same, this comparison would be enough to conclude that Tesla has what we call a "leaner" and better inventory system (trimming the "fat," they hold less unsold inventory.)

Here Ford and GM shine – both clearly run an efficient inventory system. Because these two automakers aren't using as much money to hold high levels of inventory, they instead can put investors' wealth to more productive uses – perhaps investing in advertising or R&D.

I think Ford is a great investment. The comparative efficiency of its inventory system adds to that feeling, and also makes me want to look into GM more – its inventory ratio is very good, too. I'm also making a mental note that, given these figures, if I ever see an established global auto giant with an inventory-to-asset ratio over 20% or so, I'm going to be wary of its management's use of capital. For Tesla, since its sales are still relatively low, it is not yet clear what its appropriate level of inventory should be.

The flip side
Of course, we wouldn't like a company with zero inventory. If Nissan didn't buy its raw materials and build until a Pathfinder was ordered, then a customer would be lucky to get a vehicle in two years. In order to have fast order-to-delivery time, companies have to hold a significant minimum level of inventory.

If any of these higher-unit car companies decided to slash their levels of inventory to, say half a billion dollars, I'd be worried that they couldn't make timely deliveries to their customers and would lose sales as a result. I haven't heard such a complaint at their current levels, however, and so I don't think there is a problem of too little inventory here.

More research to do
Inventory is a single line on the balance sheet, and should not make or break any investment. As our goal is to incorporate relevant information into the best investment decisions we can make, though, looking at levels of inventory can help us achieve that goal.

In addition to considering relative levels of inventory, keep an eye on changes in inventory systems in the future. If a company improves the efficiency of its inventory system or its CEO emphasizes its focus on efficient inventories, this can be a good sign of innovative and forward-thinking management.

How Much of Your Money Are These Automakers Wasting? @themotleyfool #stocks $F $GM $TSLA $NSANY Next Article
Current