In the last year, Citigroup (NYSE:C) and Bank of America (NYSE:BAC), moved in different directions -- which could create opportunity for investors.

Strong 2013
Bank of America and Citigroup each had a strong year in 2013. Citigroup's bottom-line surged. The same is true of Bank of America, as its net income nearly tripled thanks to 2013 marking a year as it turned a corner from the woes that once characterized it.

Different paths in 2014
Yet the same has not been true of 2014, as things have gotten much worse for Citigroup.

First, it announced it had to revise its income as a result of fraudulent activity from its operations in Mexico. Then, the bank was met with news the Federal Reserve would be denying its request to raise its dividend from $0.01 to $0.05 and buyback $6.4 billion worth of its common stock.

Meanwhile, Bank of America received word it could boost its dividend -- the same amount no less -- and make buybacks of $4 billion.

Just this week, it was reported the FBI will begin a criminal investigation for the fraud in its Mexican unit, which is already under investigation from a civil standpoint by the Securities and Exchange Commission. While the fraud alone cost Citigroup $400 million, it's possible this could get even worse.

The unsaid story
However, what is often unsaid about the two banks is Citigroup, even with its troubles, outpaced Bank of America across the best-known banking profitability metrics last year, as shown in the table to the right.

In fact, Citigroup was able to grow its tangible book value -- one of the most essential measures of a bank's underlying value -- by 8.1% whereas Bank of America saw its rise by just 3.2%.

All of this combined has resulted in one stunning graph: 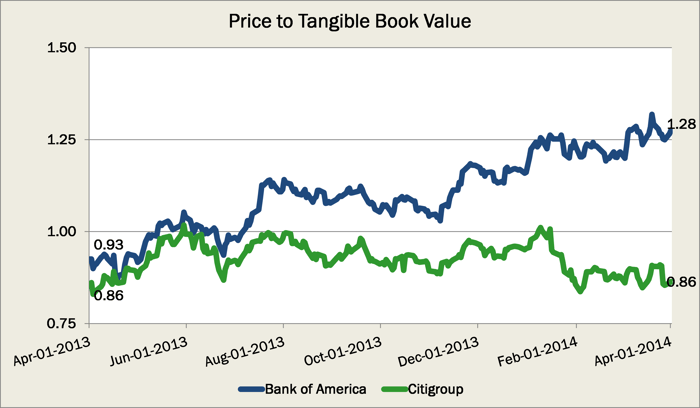 As you can see, in April of last year Bank of America traded at a slight premium to Citigroup. Yet Citigroup's multiple has been essentially flat over the last year, whereas Bank of America has watched its grow by nearly 40%.

Unfairly punished
Citigroup has had a difficult few months, but on a comparable basis, a piece of Bank of America's equity is now valued 50% higher than one at Citigroup.

This isn't a knock on Bank of America (I'm a happy shareholder), but market isn't giving Citigroup enough credit. Relative value alone is not reason to make an investment, but the reality is Citigroup has continuously been valued at less than what would be remaining if it was liquidated and only its accumulated equity remained.