The Labor Department's latest jobs report clearly did little to inspire buyers on Wall Street today, as all three major U.S. stock indices have hit the skids in afternoon trading. The U.S. economy added 192,000 jobs in March, not far from the 200,000 that economists had anticipated. The unemployment rate remained frozen at 6.7%.

The Dow Jones Industrial Average (DJINDICES:^DJI) began the day higher but then fell steadily, landing 129 points, or 0.8%, lower at 3:30 p.m. EDT. Surprisingly, the Nasdaq dropped 2.3% as a broad sell-off hit tech stocks heading into the weekend.

Tech tumbles
Leading the Dow lower was Microsoft (NASDAQ:MSFT) and Cisco (NASDAQ:CSCO), which were down 2.3% and 1.6%, respectively. Neither company is facing any real negative news, and the market has actually been excited about Microsoft's free mobile operating system strategy and Cisco's move into the cloud. But a sell-off like this one drags everything down, even when surrounding news appears to be positive.

It's days like today, when stocks are falling for seemingly no reason, that we need to step back and look at where our investments stand. Despite being slow-growth companies, Microsoft and Cisco have both outpaced the Dow this year. 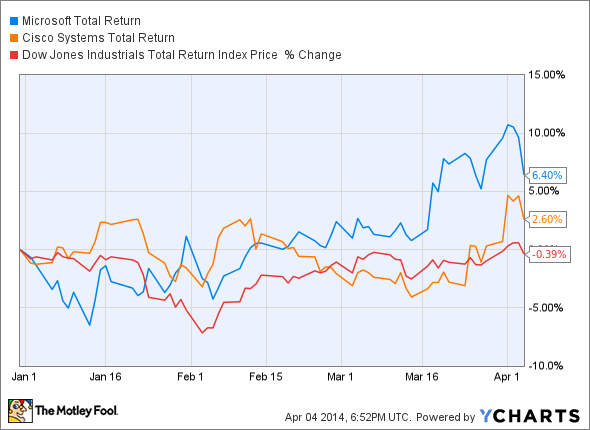 After a year when growth stocks with little profit were the big winners on the market, 2014 is shaping up to be a year for stalwarts that generate consistent cash flow. These companies fit the bill and are still giving investors good value.

At a time when it's tough to find value on the market, crazy sell-offs like today's should be seen as buying opportunities for these stocks.