Today's shareholders are demanding. They ask their management teams to forgo exorbitant compensation packages, force disclosure on carbon-related risks, and press for sustainability initiatives. These are our companies, the thinking goes, they have our money and they must not waste it. Which is why it makes complete sense that shareholders are now also calling for full disclosure of lobbying activities, targeting popular stocks like Boeing (NYSE:BA) and AT&T (NYSE:T) with resolutions this proxy season, while other companies like General Electric (NYSE:GE) float under the radar -- for now.

Shareholders speak out
Lobbying expenditures have climbed significantly over the last decade and a half, and though they have pulled back slightly in the last few years, levels remain elevated overall: 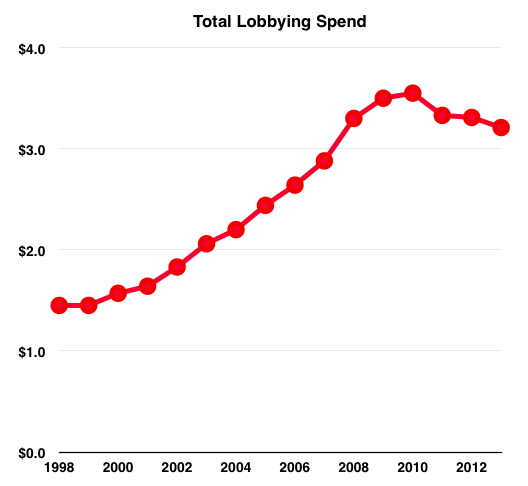 In 2013, lobbying expenditures topped out at $3.1 billion. That's a tremendous pile of cash, and as a result, shareholders are asking for some clarity at the company level.

According to the American Federation of State, County, and Municipal Employees, or AFSCME, this year's proxy season kicked off with shareholder resolutions at 48 prominent companies asking companies to disclose their federal and state lobbying records, as well as any contributions to trade organizations for the purpose of lobbying. For example, the U.S. Chamber of Commerce routinely ranks first for annual lobbying spend, but it is acting on behalf of -- and with the dollars of -- its many members .

The goal of increased disclosure is to allow shareholders to determine whether or not a company's lobbying agenda will truly advance the interests of the company, while also avoiding risks to the company's value.

Right now, the level of disclosure is laughable. Companies are required to submit lobbying disclosure forms to the Senate's database every quarter, but the forms only reveal very basic information about a company's lobbying activities, such as which area of the federal government is being lobbied, which lobbyists are involved, vague descriptions of the issues that are being lobbied on, and how much a particular lobby shop is getting paid for its services each quarter.

Depending on the level of detail in the LDA forms -- and there is no consistency here whatsoever -- you will very likely not be able to determine how much money is spent on any one issue, and sometimes it is also impossible to determine which side of the issue is being advocated for (though depending on the issue and the company, that may be fairly obvious).

In fact, there is so little information out there, so little discussion of the topic on a company-specific basis, you may not have a clue how much your own stocks spend on lobbying. Here is a list of the top publicly traded companies from 2013, ranked by lobbying expenditures: 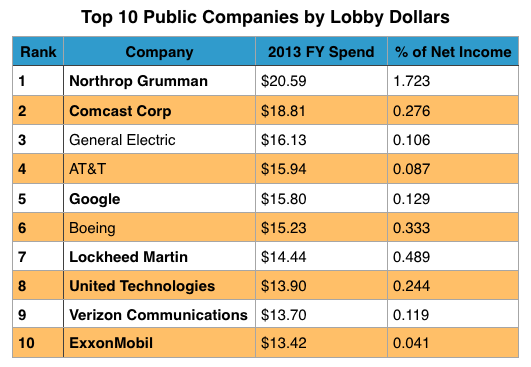 There is a clear trend here -- defense contractors that are dependent on the government for revenue generation spend a lot of money lobbying. The other trend is that, with the exception of Northrop Grumman (NYSE:NOC), which has the smallest market cap by far, these are massive companies. Not surprisingly, seven of these companies faced shareholder resolutions for lobbying expenditures in the 2014 proxy season. Northrop, GE, and Lockheed were the only ones to escape this year.

Of course, this chart is just a one-year snapshot; it doesn't tell you much about a company's overall lobbying story. AT&T for example, spent close to $28 million lobbying in the past, and though $15.9 million is still significant, it is down quite a bit from 2006. GE is in a similar boat, spending close to $40 million lobbying in 2010, but a mere $16 million in 2013. In other words, the potential is clearly there for companies to spend more, so it is better to get them in the habit of disclosing information now.

In the grand scheme of things, the amount of money these companies spent on lobbying in 2013 is not that much. Outside of Northrop Grumman, lobbying expenditures accounted for less than 1% of net income at all of these companies. However, because shareholders have only a vague notion of what the money is actually being used for, the amounts are significant enough to warrant a conversation.

Under few circumstances would a CEO be able to announce "I just gave myself $20 million for an undisclosed reason. Don't worry about it." The same version of accountability we demand from management over compensation packages should extend to lobbying expenditures, especially given these costs have been significantly higher in the past.

Why companies will keep lobbying
Lobbying works, which is why companies do it. But many investors have no idea just how lucrative it can be. Two years ago, the nonpartisan nonprofit United Republic put out some research on the lobbying returns of certain industries The data itself isn't especially fresh, ranging from 2003 to 2011, but it would be naïve to think the overall pattern has changed drastically. Here are the statistics from United Republic, you can view the full infographic here:

Clearly, lobbying garners results. But shareholders might take significant issue with the ways and means these results are achieved, if they only knew about them in the first place. Lobbying may never go away, but that doesn't mean we shouldn't demand more transparency in the future. Pressing for more disclosure is the first step toward a more complete dialogue between management and investors.