Chipotle Mexican Grill (NYSE:CMG) takes a clear stance when it comes to serving its food with integrity, literally. Part of the charm of the Chipotle experience is watching your food being made. Much like a number of high-end restaurant concepts, the fast-food Mexican grill centers its storefronts around an open kitchen. It's transparency like this that sets Chipotle apart from competitors like McDonald's (NYSE:MCD) and Yum! Brands (NYSE:YUM).

That transparency originates from the burrito maker prioritizing something that its competitors don't: social responsibility. This focus is worth Chipotle's premium, as it increases trust among two of its key stakeholder groups: its customers and its employees.

Guest count
Chipotle has built its brand strength up over the years as it worked diligently to build trust and gain a loyal burrito-head following. One of the cornerstones of Chipotle's business centers on being proactive in cultivating an honest dialogue with its customer base. A vital part of that conversation is embracing ingredient transparency.

This focus on providing ethically sourced ingredients has set Chipotle apart from the fast-food herd. While both McDonald's  and Yum!'s Taco Bell  brand have had to defend the composition of their meat, the burrito maker has chosen to take a proactive approach to ingredient transparency. 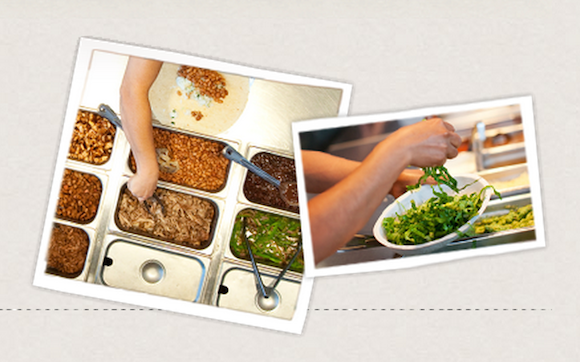 For instance, due to supply constraints a number of Chipotle's storefronts have had to serve conventionally raised meats instead of the Responsibly Raised meats that the company prefers to serve . Instead of waiting for its customers to call the company out, Chipotle chose to be proactive about disclosing this temporary change by having each affected storefront put up a poster, which allows customers to avoid the meats if they so choose.

On top of event-specific supply concerns, Chipotle has gone a step further by becoming the first national restaurant chain to voluntarily disclose the use of genetically modified organisms, or GMOs , a proactive step indeed.

Chipotle's decisions to hold itself accountable and document any menu changes in a clear manner have proven to its customer base that Chipotle will take ownership for any and all product issues. This transparent approach seems to be working well for the company, as it saw same-store sales grow 5.6% in 2013. Yum! saw no change in its U.S. comps . McDonald's saw relatively flat global year-to-date comps as well . Chipotle's approach to fostering an honest and transparent dialogue among its customer base isn't the only thing that has prompted this growth; perhaps the company's emphasis on employee advancement comes into play as well.

Employee contributions
Unlike its peers, Chipotle doesn't only prioritize its part-timers; instead, it opts to hire and develop people who are as passionate about food as they are about Chipotle's mission in the hope of developing them into senior employees. The burrito maker provides comprehensive training in order to cultivate a workforce that it generally promotes from within. About 85% of Chipotle's salaried management and about 96% of hourly management come from internal promotions .

The company also fosters a community among its employees, as it relies on internal referrals in order to determine which employees should move up. Once an employee gets to Chipotle's Restauranteur position, Chipotle expects them to mentor others. This Resturanteur program has resulted in 500 Restaurateurs overseeing two-thirds of Chipotle's storefronts.

Chipotle has opted to invest in its workforce instead of taking the route taken by Yum! and McDonald's that encourages high turnover and increases risk. When it comes to increasing employee satisfaction and potential, the franchise model, which Yum! and McDonald's both use, is intrinsically flawed, as it primarily allows for promotion only at the individual store level and thereby discourages employees' career aspirations within their respective companies.

Investing in the good guy
Chipotle has worked diligently to build its brand strength around being transparent and loyal to both its customer base and its workforce. The company's focus upon building these relationships has historically afforded Chipotle security in its growth by increasing its pricing power. People trust the brand, so in 2000 when Chipotle had to increase the cost of its carnitas in order to source the pork ethically, sales actually increased .

People have changed the way they value brands. In fact, 62 % of consumers surveyed by ConAgra Foods have opted to patronize companies that support important social issues. Chipotle exemplifies that change as it represents being transparent, proactive, and responsible in its ingredient choices and employee relations, areas in which Yum! and Mcdonald's lag behind. 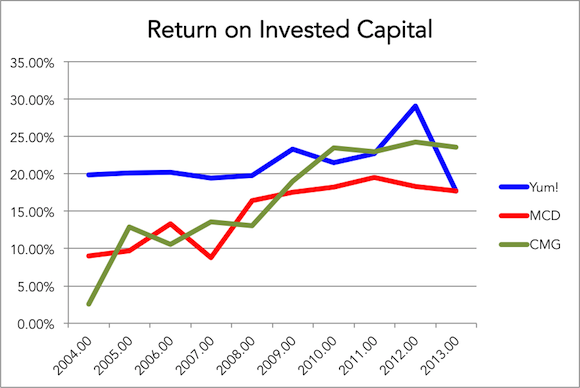 Chipotle is also proving to its shareholders that it knows what it's doing by way of managing its capital. The burrito maker is outperforming both Yum! and McDonald's by producing a higher return than its competitors on its invested capital. Chipotle has been fostering a steady increase in this return, which has stayed around the 23.5% range since 2010. McDonald's return has fluctuated between 17.7% and 19.5% in that same time-frame, while Yum!'s return on investment capital has been all over the place as it has hit anywhere between 17.6% and 29%, with the former occurring in 2013. Chipotle has been steadfast in keeping that percentage high, which proves that it outperforms its competitors in both social responsibility and capital management.