Two reasons why stocks don't trade over weekends, and one scenario that might reverse it.

From 1887 to 1952, stocks on the New York Stock Exchange traded from 10 a.m. to noon on Saturdays.  After 1952, however, stocks traded only over weekdays. Given all the advanced technology today, why don't stocks trade over weekends? 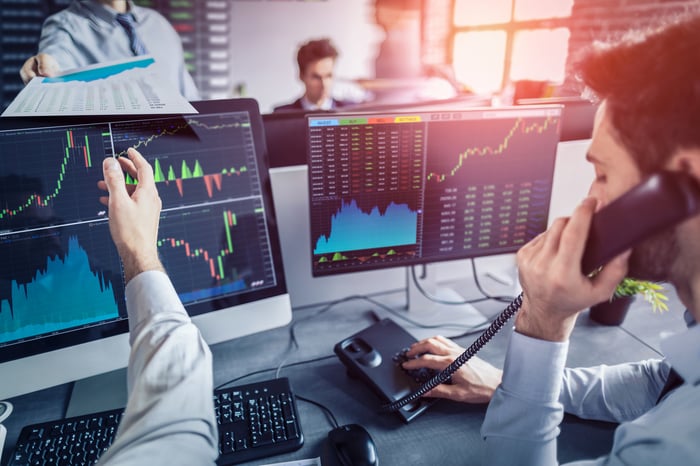 Two reasons for the status quo
One reason is that many money managers don't work on Saturdays and Sundays. Without those managers taking the other side of trades, the market tends to be less liquid. A less liquid market tends to be more volatile. It also tends to have wider spreads between bid and ask. That extra volatility makes it harder for non professional investors to trade without getting nickel and dimed.

Another reason is that in times of crisis, weekends can be a natural circuit breaker. If something bad were to happen, weekends offer time for the market to digest news and time for the government to work behind the scenes to calm the market. In the depths of the 2008 financial crisis, the U.S. government used weekends for exactly that purpose, by working behind the scenes to save the financial system. The U.S. government, for example, convinced Goldman Sachs and Morgan Stanley to become bank holding companies over a weekend. Many bailouts and stop-gap procedures were discussed over weekends before they were implemented.

One reason that no longer applies
Those things being said, the practical reason for not trading on weekends -- that floor traders on exchanges can't work 24 hours a day seven days a week -- no longer applies. Most trades today are handled by electronic communications networks, or ECNs, rather than by human floor traders.  Those ECNs have no problem working 24 hours a day seven days a week.

Like the weekends, stocks trading over extended hours tend to be more volatile because many normal market participants don't trade during that time, resulting in wider differences between the bid and the ask prices for stocks. As a result, many investors do get nickel and dimed. Despite the problems, however, market regulators have tolerated extended hours trading.

The bottom line
If the downsides of extended hours trading are tolerated, one can argue that weekend trading shouldn't be tolerated as well. The two are basically the same side of the same coin.

I think the reason why weekend trading hasn't been implemented is that there is inertia in the system. An inert object will remain inert until an external force pushes it.

I believe the Internet will be that external force that causes weekend trading to occur. With the Internet, everything is on, all the time. People can use information utilities such as Google or Wikipedia around the clock and on demand. Even the Internet's contentious cryptocurrency, Bitcoin, trades 24/7.

Someone, somewhere will develop an Internet product that changes the minds of the people who decide market hours. Until then, we can only imagine what weekend trading would be like.