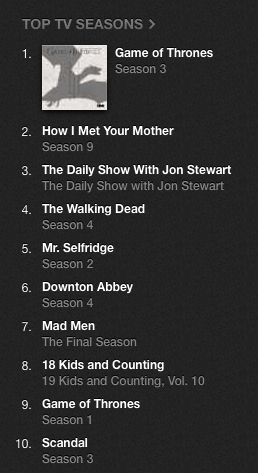 Game of Thrones season 4 returns tonight, and judging by the numbers, it could be the biggest one yet for HBO and Time Warner (NYSE:TWX). Tim Beyers explains why in the following video.

According to the latest figures from iTunes, Game of Thrones season 3 is the top seller among all available TV seasons. The win comes amid huge ratings for AMC Networks' (NASDAQ:AMCX) The Walking Dead, which drew 15.7 million viewers to the season 4 finale -- a 27% increase over last year's conclusion. The show has also garnered huge interest among iTunes viewers, ranking third on the full-season sales chart.

Tim says the gulf suggests that Game of Thrones season 4 can be a catalyst -- a property that can change HBO's business even more than last year, when a 28% bump in viewership for Game of Thrones helped boost revenue 4.4% and operating income 8.5%.

To be fair, the overall rankings might not mean much. Game of Thrones is beginning and The Walking Dead has just ended. And yet if you compare the two on an episode-by-episode basis, it's Game of Thrones that earns a premium. HBO charges $3.99 per HD download at iTunes versus $2.99 for each season 4 episode of The Walking Dead. Viewers are willing to pay up to get access to Game of Thrones, even if they won't pay for HBO.

The takeaway for investors, Tim says, is that Game of Thrones season 4 should embolden Time Warner executives to try new ways to get HBO -- and HBO properties -- into the homes and devices of viewers who don't pay for a full cable subscription.

Do you agree? Would you watch Game of Thrones season 4 without a cable subscription if you could, and if so, what would you pay? Please leave a comment below to let us know what you think.

For HBO’s Business, ‘Game of Thrones’ Season 4 Could be a Game Changer @themotleyfool #stocks $TWX $AMCX Next Article
Current