Those of you who've been actively following the Pacific Drilling (NYSE:PACD) growth story over the past few years are undoubtedly aware that the company has had the ambition of paying out dividends to shareholders for quite some time. Well, that day we've all been waiting for may have finally come.

Toward the end of February, Pacific Drilling announced that its Board of Directors is recommending the company initiate an annual dividend of $152 million to be paid to shareholders in 2015. If the shareholders accept this proposal at the Annual General Meeting, it will transform this former growth-only play into a growth and income play.

How dividend payouts are determined
No individual shareholder will collect all of this $152 million, though. So, in order to fully understand this, it is necessary to understand how dividend payments work. The company starts by deciding how much money it wants to pay out to all of the shareholders combined. In this case, that number is $152 million.

The management of the company then proposes the payment of this dividend at the company's Annual General Meeting, which all shareholders are invited to attend. If the majority of the shareholders vote to approve this dividend payment, then the company pays it out over its given dividend payment schedule. For example, if Pacific Drilling opts to pay its dividend quarterly, then it will pay out $38 million four times a year. The total payout is dividend evenly among all the outstanding shares when it comes time to pay it.

Dividends start with first quarter of 2015
In its announcement, Pacific Drilling states that management wishes to begin its dividend payments with an initial payment in the first quarter of 2015. Of course, this is assuming the shareholders approve this payment at the company's Annual General Meeting. Here's the exact quote:

The Board will submit a proposal at the 2014 AGM that the Company make cash distributions of up to $152 million in the aggregate to shareholders in 2015, commencing with an initial payment in the first quarter of 2015. The timing, amount, and form of the distributions will be subject to the discretion of the Board.

From the sounds of this statement, the company's plan is to pay its dividends quarterly, that last sentence notwithstanding. So, how much is the quarterly per share dividend likely to be?

How much will the dividend be?
First, it is a good idea to note that there is a chance that the company's total dividend payment will be less than $152 million. However, for the purposes of this analysis, we will assume that Pacific Drilling pays out the entire $152 million that the Board proposed to investors in four equal installments of $38 million each.

According to Pacific Drilling's 2013 Annual Report, the company had a total of 217,035,000 shares outstanding on December 31, 2013. The shares outstanding are the number of shares currently issued and in the hands of the public. Therefore, this is the number of shares that will split the total dividend payment made by Pacific Drilling. Thus, assuming the company pays out an aggregate dividend of $38 million, each share would pay $0.175 per quarter. This would result in an annualized dividend payment of $0.70 per share. This would give the stock a 6.61% yield at current prices.

This yield would certainly give Pacific Drilling a competitive dividend yield with those paid by its peers. Here's how Pacific Drilling's dividend would stack up with that of other offshore drilling companies:

Pacific Drilling itself provides evidence of this in its presentation at the Howard Weil 42nd Annual Energy Conference. Here is a chart the company included in this presentation that shows how analysts expect its EBITDA growth to stack up against that of a few other high-growth companies and that of its peers: 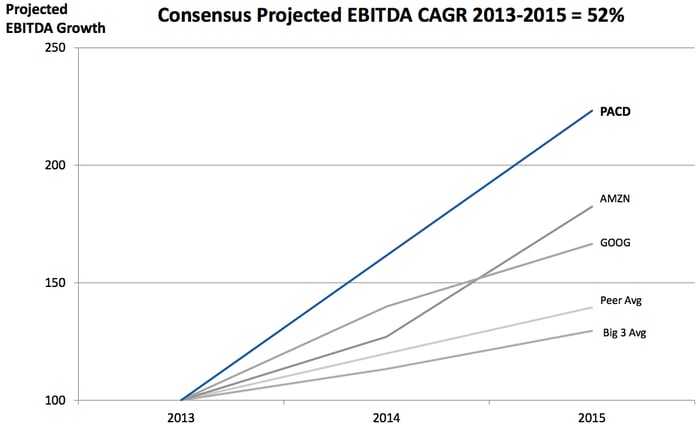 As the chart shows, Pacific Drilling's EBITDA growth rate over the next few years is expected to not only best that of its peers, but to be one of the highest growth rates of any company in any industry! The prospect of getting that growth along with a 6.61% dividend makes Pacific Drilling a very appealing play.

Pacific Drilling can afford this payout
The final question we should ask ourselves is, how easily can Pacific Drilling afford to pay this dividend? Well, to determine that, we have to know what the company's cash flow and income is going to be in 2015.

Fortunately, Pacific Drilling itself provides some insight into this. In the company's aforementioned presentation, Pacific Drilling states it expects its cash flow from operations to reach at least $600 million per year in 2015. 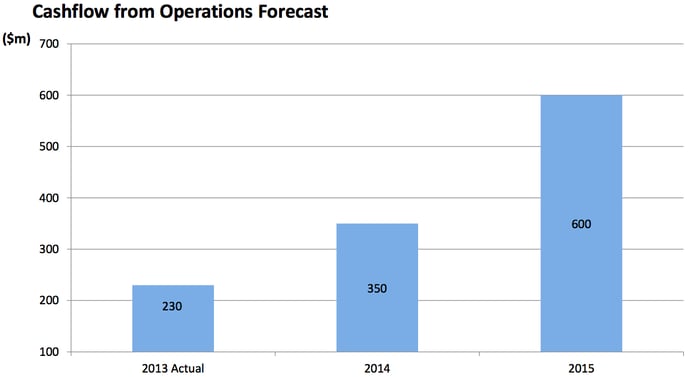 A cash flow from operations of $600 million would certainly represent sufficient cash flow for the company to be able to afford to pay out a dividend of $152 million.

We can see further evidence that Pacific Drilling is generating enough cash to afford this dividend by looking at the company's current cash flows. In 2013, Pacific Drilling generated total operating cash flows of $230.6 million. Thus, the company is actually generating enough cash today to be able to cover the proposed dividend with money left over that can be used to pay down debt, partially finance the purchase of a new rig, or used for some other purpose.

However, since Pacific Drilling will have several more rigs operating in 2015 than it does today, it is a reasonably safe bet that its operating cash flow will also be higher, thus allowing the company to comfortably be able to pay this proposed dividend and still have plenty of money to use for other purposes.