The big oil model has worked for decades. By combining upstream, midstream, and downstream assets these companies can bring big fields online and produce steady cash flows. Now that oil is getting difficult to find and big fields like Kashagan are fraught with problems, the big oil model faces significant challenges. Combining a number of small oil companies to replicate the model of big oil is quite attractive for smaller investors, as this strategy offers higher gains and more growth. 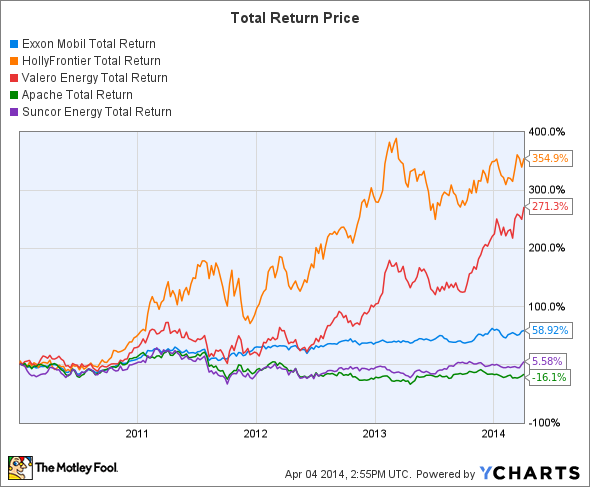 The above chart shows how ExxonMobil (NYSE:XOM) has had moderate gains since 2010, while refiners have shot upward. The booming refinery export business and cheap U.S. oil have given Valero (NYSE:VLO) and HollyFrontier (NYSE:HFC) big returns.  At the same time smaller upstream firms like Apache (NASDAQ:APA) and Suncor (NYSE:SU) have gone nowhere, but this should change. Apache's restructuring is pushing more capital into profitable U.S. production, and Suncor's new growth strategy should help the company maintain a tighter grip on margins.

ExxonMobil versus a diversified portfolio

If you had invested $250 in each of these small companies vs. $1,000 in Exxon, you would sit on a total of $2,539.20 in total returns, which compares to ExxonMobil's $1,589.20 in total returns. That's a big difference, and these estimates are not too optimistic. If you switched out Suncor and Apache for upstream producers that have focused on the Bakken then your upstream return would have been even higher.

The important point is that combining mediocre upstream investments with solid U.S. downstream assets lets beats ExxonMobil's return by a significant amount. ExxonMobil is still a solid company with steady returns, but it faces big challenges related to growing capex. In the past 10 years its ratio of cash flow to capex has fallen 47.3% while its operating income has only fallen 3.1%.

Recent statistics are worrying. In 2011 ExxonMobil produced 4,506 thousand barrels of oil equivalent per day (mboepd), but in 2013 its production fell to 4,175 mboepd.

On the other hand Apache grew its production slightly from 2011 to 2013. In absolute terms it expects its 2014 production to fall to around 575 mboepd, but this stems from asset sales pushing down its base production.

Suncor is also growing its core production. In 2011 the oil sands miner produced 305 mbpd from its core oil sands operations, and in 2014 it expects to produce 400 to 430 mbpd. Just like Apache, Suncor has sold off some big assets to focus on its core business. In terms of total production Suncor's 2014 estimated range of 525 mboepd to 570 mboepd is similar to its 2011 production of 546 mboepd, which shows that it has been able to maintain total production levels even in the face of asset sales.

Valero and Holly Frontier offer great exposure to the refining industry. HollyFrontier's refining capacity is just 443 mbpd, but it is perfectly positioned to take advantage of discounted Midwest crudes. It has great access to the domestic U.S. market. During the 2001 to 2010 period when America's WTI traded at a premium to Europe's Brent, HollyFrontier still managed to post an average net income of $2.69 per barrel.

Valero is a different sort of refiner with strong export capabilities. It has refining capacity of 2,870 mbpd with the majority of its capacity along the Gulf Coast. Thanks to its Gulf of Mexico access Valero is perfectly situated to refine cheap U.S. oil and export in-demand products like diesel. With Gulf Coast 2014 diesel refining margins around $15 per barrel, this export capability is highly profitable.

How will the future play out?
The benefit of running a vertically integrated empire is that downstream and upstream work together to stabilize overall income and provide steady returns. By combining individual upstream and downstream companies you can replicate big oil's positives without exposure to ExxonMobil's upstream constraints. The one downside is that based on current yields an equally weighted portfolio of these four companies has a trailing yield of 1.95% while ExxonMobil yields 2.6%.

What's an investor to do?
ExxonMobil offers a nice package with an attractive dividend, but rising capital expenditures can eventually cut into its earnings and dividends. By investing in a number of separate companies you can replicate ExxonMobil's success without its constraints. The very risk-adverse have another option. Investing in ExxonMobil along with smaller companies like Valero and Suncor offers the best of both worlds: ExxonMobil's stability and the smaller companies' growth.