According to Reuters, there was a rumor going around that Whiting Petroleum (NYSE:WLL) might be having problems with its access to frac sand. Whiting denied that rumor, saying instead that its much-smaller rivals were likely the ones complaining about constrained supplies. Further, it noted that it has more than enough purchasing power and access to sand through its oilfield service agreements. While that is more than likely true, the whole discussion is one that oil king EOG Resources (NYSE:EOG) will never have to face. Here's why.

Cutting out the middle man

Because EOG Resources self-sources its frac sand, it will never be faced with running out of the critical fracking ingredient. So, while there are rumors that key sand distribution points in Chicago and the Midwest are running low, it's not a concern that EOG Resources or fellow vertically integrated producer and frac sand mine owner Pioneer Natural Resources (NYSE:PXD) need to worry about.

EOG Resources' foray into frac sand began a few years ago, when it invested $200 million in three sand mines and two processing plants in Wisconsin. With the company using about 3 million tons of sand each year to frac, it made a lot of sense to make these investments. The company already built much of the rail infrastructure to move its oil, so its logistics were already in place. It's now saving about a half a million dollars per well by self-sourcing its sand.

Pioneer Natural Resources also made the decision to invest in a sand mine. In 2012, it paid $297 million to acquire an industrial sand business. That move enabled the company to lock up a 30-year proven supply of sand to be its primary source for fracking its wells in the Permian Basin. It also enables the company to use more sand in its wells to improve results. Because of this, neither is worried about any rumored shortage.

Sticking with the middle man
Whiting Petroleum considered buying its own mine a few years ago. However, it choose not to because it felt its purchasing power with oilfield service providers was more than enough to secure its access to all the sand it needed. So far, that has worked out just fine for the company.

There's just one problem with that. The costs of frac sand is forecasted to continue rising along with its volume in the years ahead. Take a look at the following chart from a recent investor presentation by frac sand producer. 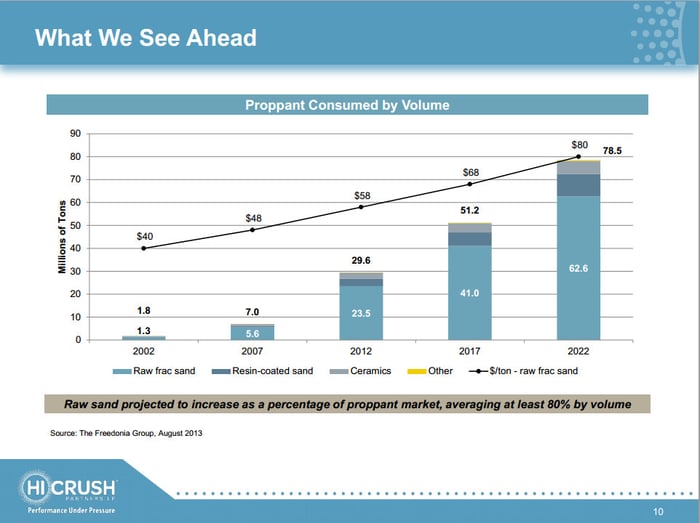 As that chart shows, proppant volume is only expected to increase in the future, which will push the price for sand higher. So, while Pioneer Natural Resources and EOG Resources basically locked in the price of frac sand for the next few decades, Whiting Petroleum and others will eventually be paying escalating prices for frac sand in the future. Further, while most frac sand producers are investing to grow capacity, there still is the risk that a sand shortage could still impact growth for Whiting and others that aren't as vertically integrated.

Investor takeaway
There is a case to be made that frac sand mines and rail terminals are better owned by third parties as these companies can achieve greater synergies from owning these assets. However, while Pioneer and EOG aren't getting those synergies, there is the peace of mind and cost savings that come from locking in long-term supply. It's simply one problem these companies will never have.