What a difference a few years make. It wasn't that long ago that we were worried about running out of oil. Now, oil production is the highest it has been in decades. Innovations in horizontal drilling and hydraulic fracturing have been driving much of those production gains.

However, there is one key ingredient in the process that doesn't get much credit: proppants. In fact, proppants, like sand, typically make up about 9.5% of the volume of what's pumped down a well in the fracking process. What's interesting here is that while sand is just one of a number of proppant options, it's beginning to become the preferred proppant for a number of producers. That trend could make pure-play proppant producer Hi-Crush Partners (OTC:HCRS.Q) a big winner over the long term.

Oil and gas producers have a number of proppant options. In addition to the northern white sand that Hi-Crush mines, producers can also choose a resin-coated proppant from a competitor like U.S. Silica (NYSE:SLCA), or ceramic proppant from CARBO Ceramics (NYSE:CRR) both of which cost more than raw sand. As the chart below shows, raw frac sand is the industry standard and should continue to take its share of the market. 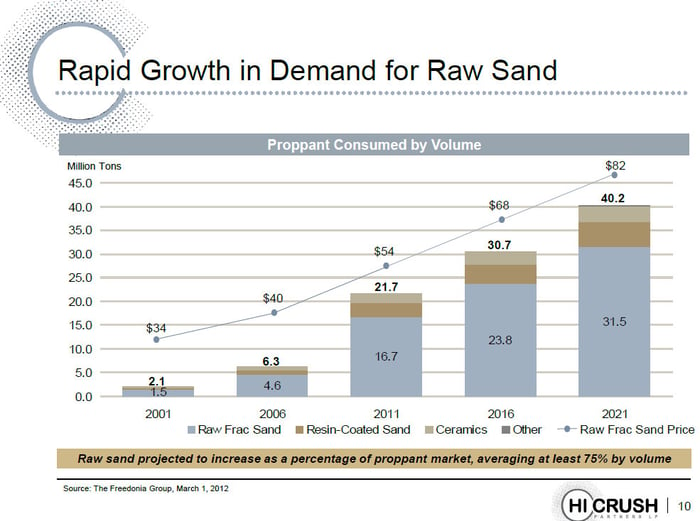 While producers have a number of options, some are beginning to see that the best option isn't always the most expensive. Take for example the comments by Timothy Dove, the COO of Pioneer Natural Resources (NYSE:PXD), on his company's most recent quarterly conference call. He noted that one way the company is improving its well economics is to use more white sand. Currently 75% of its Eagle Ford Shale operations are using white sand and the results are very strong, while also reducing its costs over higher-cost options. In fact, the company is saving almost a million dollars per well by using white sand to frac its wells.

Even more interesting is that the company is increasing the amount of sand it's using. Dove said, "The results look very positive, though, to basically pump more proppant. That's getting pretty clear to us. And so that's, I think, the direction we're going." With sand being a volume business for a company like Hi-Crush, the more it can sell, the better its margins, especially when considering that it's the low-cost producer. Long term, the volume of proppants used should continue to head higher: 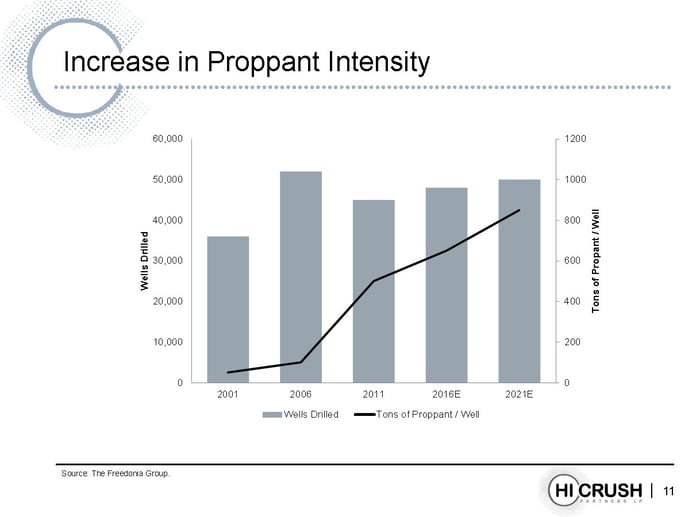 That's not to say competitors such as U.S. Silica, which also produces white sand won't also benefit, as it clearly will. In fact, the company's volumes have increased 44% year over year. Overall, U.S. Silica is an industry leader and is planning to act as the industry consolidator by snapping up smaller proppant players. However, its business is much more than just frac sand; it has more than 250 products.

Further, higher-cost ceramics will also have a place in the market. As the world's largest manufacturer of ceramic proppants, CARBO will clearly profit from the overall trend of increased proppant usage. In fact, ceramics can indeed deliver superior economics as productivity can increase by 20%-30% while estimated ultimate recoveries can improve by 30%. However, some producers like Pioneer are simply seeing better economics by simply using more sand.

That's why I like Hi-Crush, which is a pure-play on pure frac sand. I like the company's focus and its structure as an MLP, which I think set it apart from its peers. What I like best is the fact that it's in the very early stages of its growth, having just gone public last year. Hi-Crush has a number of growth opportunities to take advantage of increased demand for sand. This includes drop-down transactions from its parent company, organic growth projects on undeveloped land as well as acquiring smaller rivals. Best of all, as it grows so will its distribution, which is why I prefer its MLP structure. In fact, the company sees low double-digit distribution growth next year as its growth plans begin to deliver.

Oil and gas producers are starting to see the benefits of using more proppants per well, which should yield big long-term returns for proppant makers. Specifically, I think Hi-Crush is in a great position to reward investors over the long-term because it's a pure play and structured as an MLP. That's why I think this trend could make Hi-Crush a big winner.