With the key spring planting season in the U.S. knocking at the door, investors in fertilizer stocks are hoping to see their shares head north as fertilizer makers do some brisk business and rake in profits. While the optimism is spread across the board, nitrogen-centric companies are usually considered better placed, since nitrogen is the most widely applied nutrient among farmers.

Unfortunately, investors may prepare for some disappointment, as two looming factors threaten to disrupt growth at nitrogen-producing companies this year. Count PotashCorp (NYSE:POT), CF Industries (NYSE:CF), Agrium (NYSE: AGU), and Rentech Partners (NYSE: RNF) among some of the companies that could be at the receiving end.

Mother of all problems
Agrium hugely disappointed the market last week when it announced its earnings guidance for the first quarter -- it expects to just break even on its earnings per share.

Will spring season prove a failure in 2014? Source: PotashCorp.

Now consider this: The Street was projecting Agrium to turn in a profit of $0.53 a share in Q1, and the company earned $0.94 a share in the first quarter of 2013. In other words, Agrium's first-quarter earnings are ready to nosedive compared to a year earlier.

Aside from an unexpected plant shutdown, Agrium largely blamed the late start to spring planting for the huge expected drop in earnings. Several key crop-growing regions are still buried under snow, and thawing hasn't quite kept pace. But while the wet soil could delay planting by at least a couple of weeks, the real problem lies elsewhere.

Corn is losing its grip
In a report released last Monday, the U.S. Department of Agriculture projected corn acreage to fall to 91.7 million acres this year. That would be a 4% and 6% drop over last year and 2012, respectively. The USDA further projects expected returns from corn to be lower in 2014 compared to "recent years," which could further discourage farmers from planting corn. That's terrible news for nitrogen producers.

To give you a better idea, take a look at the following graph, which shows the U.S. fertilizer use and crop acreage, from PotashCorp's latest market analysis report. 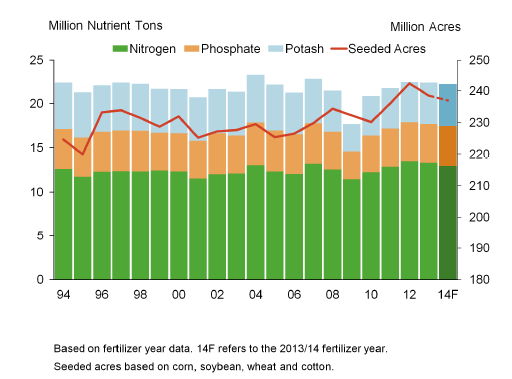 Note how nitrogen alone makes up more than half the total fertilizer used in the U.S., and how its consumption is likely to dip this year because of lower corn acreage.

Like Agrium, Rentech Nitrogen projects lower first-quarter deliveries for nitrogen in light of delayed planting. CF Industries, which is also the largest North American nitrogen producer, earlier projected robust demand for basic nitrogen compound ammonia through the first half of 2014, but also expected lower prices to play spoilsport. Ironically, the tables may have turned, with ammonia prices improving but lower corn acreage threatening to hurt demand. Whatever be the case, revenue for nitrogen companies will likely take a dip. Worse yet, feedstock costs are inching up, which means the profits of these companies are under threat as well.

And the trouble maker is...
Not many know that natural gas makes up three-quarters of the total cash cost to produce ammonia. On average, the cost to produce one short ton of ammonia increases by $33 for every $1 per MMBtu increase in the price of natural gas. 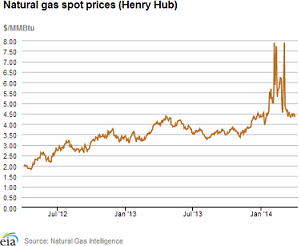 Natural gas is hovering around $4.5 per MMBtu currently, up from under $4 at the same time last year. And considering natural gas even crossed $6 at one point in February, the average cost for nitrogen companies for the first quarter of 2014 could be substantially higher year over year. Though most fertilizer companies lock in their gas requirements in advance, they leave a good portion to spot purchases.

That's not all. The impact of higher ammonia costs also spill over to the phosphate nutrient segment, since ammonia is a key input for phosphate. So, for instance, a $10 increase in the cost of producing one short ton of ammonia could increase CF Industries' phosphate production cost by $2.18 per ton. While Rentech Nitrogen has nothing to do with phosphate, CF Industries produced the nutrient until last month, when it sold its phosphate business to Mosaic. PotashCorp has the largest exposure to phosphate after Mosaic among U.S. producers, while Agrium is a small producer of the nutrient.

But the bottom line is that every nitrogen producer has to bear the brunt of rising natural gas prices. The only exception is CVR Partners, which uses petroleum coke instead of gas to produce nitrogen. But no company can escape a slowdown in demand for fertilizers.

The Foolish bottom line
While natural gas prices have always been volatile, the marked shift in famers' preference for soybean over corn this year is a fresh challenge for nitrogen producers. Any slowdown in demand is harmful, especially when nutrient prices aren't catching up. Investors pinning hopes on the spring season may, perhaps, have to wait longer to see fertilizer companies bloom.