Masters of the universe. The smartest guys in the room. The firms that lead leveraged buyouts, hedge their bets, and double down using institutional and sovereign wealth are an elite group. However, private equity is no longer strictly private. Now you and I are able to benefit from the fee income, deal making, and publicly traded spin-offs as well. This past year has been very good for investors in Blackstone Group (NYSE:BX), Apollo Global Management (NYSE:APO), Carlyle Group(NASDAQ:CG), and KKR(NYSE:KKR). 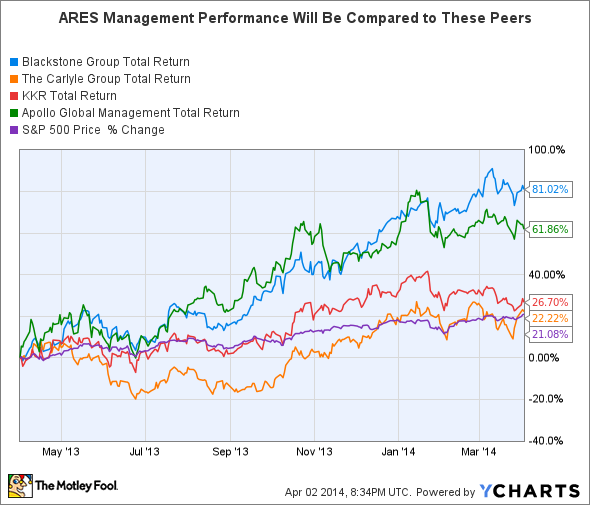 All four firms are outperforming the S&P. The two firms that seem to be lagging behind, Carlyle and KKR, paid out dividends yielding 15.9% and 8.3%, respectively. Pretty impressive. 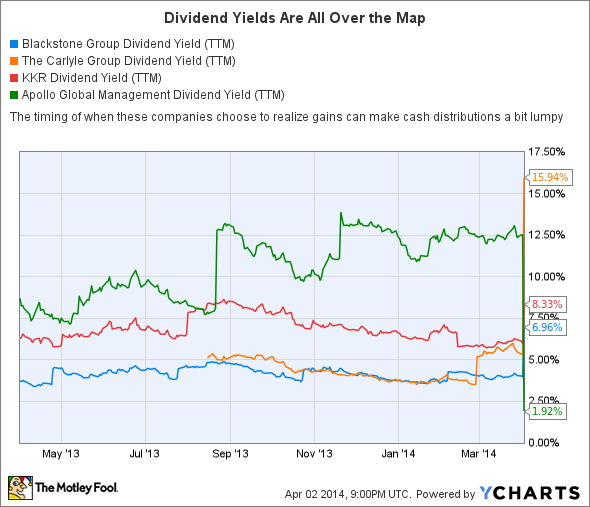 However you choose to slice and dice these results, it is fair to say that this sector has performed quite well this past year. Industry leader Blackstone Group has paid out a competitive dividend yield while crushing the market compared to its peers and the S&P 500. Very impressive.

What has Ares spun-out previously?
There are currently two publicly traded Ares managed companies. Both of these companies are focused on opportunities to invest or lend in the commercial real estate sector. 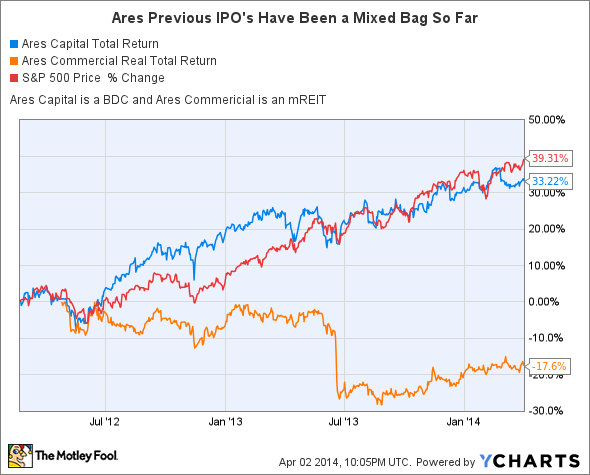 Ares Commercial (NYSE:ACRE)has not been able to gain much traction since its May 12, 2012 IPO. This company underwrites and makes loans on commercial real estate that typically commercial banks tend to avoid. In theory, this could be a lucrative space. In practice, it seems that it has been challenging for Ares Commercial.

The most telling event came in June, 2013. The company announced a secondary stock offering of 18 million shares at $13.50 per share. The problem for existing stockholders was that at that time, the common shares were trading at $16.00 per share. It is never fun to lose 9% in one day, especially when it was a decision made by management.

Ares Capital (NASDAQ:ARCC) is a business development company, or BDC, publicly traded since October, 2004. Fellow Fool Matthew Frankel recently compared Ares Capital with two of its BDC peers, Prospect Capital and Apollo Investment Corp. Although $8 billion market cap Ares Capital is the largest of these three BDCs, he pointed out that Prospect Capital is well diversified and pays out a dividend north of 12%. 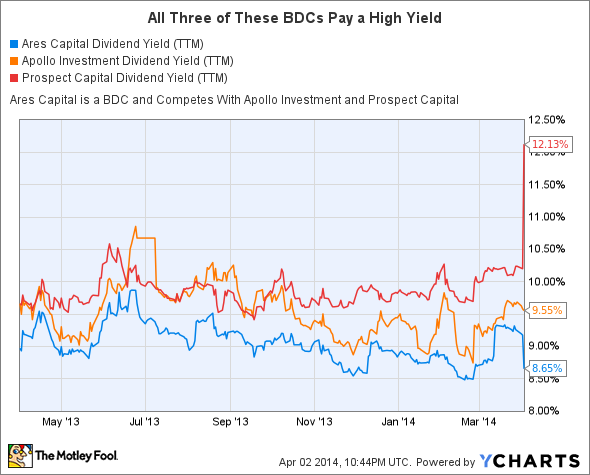 BDC's are very similar to REITs with regard to dividends. They both are required by the IRS to pay at least 90% of taxable income as dividends. This is a major attraction for investors who desire to augment their income. Keeping that in mind, the Prospect Capital dividend seems to be very attractive.

No guts, no glory
Many investors today are familiar with the 2008 implosion of investment bank Lehman Brothers. If you are a bit long in the tooth like I am, you may recall the 1990 implosion of the then junk bond giant Drexel, Burnham, Lambert. Perhaps the names Michael Milken or Ivan Boesky may ring a bell. I know it might seem like ancient history. However, many well respected alumni from Drexel are quite relevant to this article.

So it should not come as a huge surprise that according to Reuters, Ares Management senior executives: Antony Ressler and John Kissick were bond traders during the late-80s at Drexel and helped co-found Apollo Global Management alongside Leon Black. In 1997, the Apollo capital markets business was spun out into Ares, which became independent in 2002. The current senior partners at Ares are expected to own ~70% of the company after the IPO.

Investor takeaway
Ares Management will be up against four of the most talented and powerful alternative asset managers in the world. It appears to be both an incestuous and very competitive environment. Rather than jump right in to this IPO, my sense is that retail investors may want to take a more cautious approach. Ares will have to show that it can compete with a very impressive peer group.