The paintings and coatings sector has notably outperformed the market in recent years, as companies such as PPG Industries (NYSE:PPG), Valspar (NYSE:VAL), and Sherwin-Williams (NYSE:SHW) have all delivered handsome returns to shareholders. RPM International (NYSE:RPM) has done the same, but it has notably underperformed the rest. However, its recent performance has been relatively and absolutely strong in recent months, and despite its hefty valuation, the stock is one of the most interesting industrial plays out there.

As ever with investing, the important thing is to look at the future rather than the past, and this observation carries some weight when looking RPM International. Foolish investors already know about RPM International's growth prospects in 2014, and it's time to update investors on how it's executing. A share-price graph of the company relative to its peers reveals that it's starting to outperform. 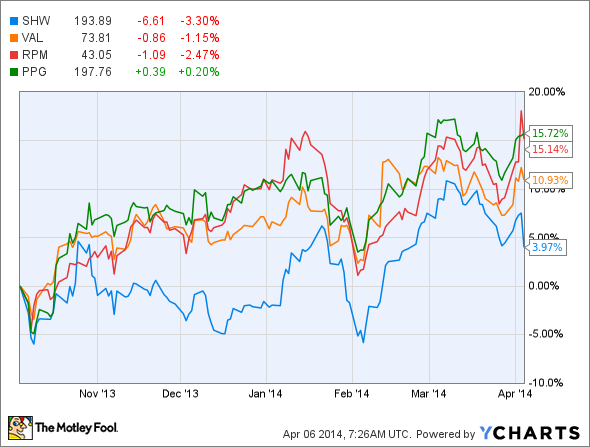 It's interesting to compare the four companies, because their performance and prospects could be indicative of a shift in growth prospects from housing-related construction toward commercial-based activity. It's not that housing is getting weaker, but rather that commercial construction looks likely to grow following a few fallow years. As for industrial coatings, the outlook remains mixed, but if economic growth remains on the track that history suggests, industrial investment will pick up.

For example, in the third-quarter conference call, RPM International's CEO, Frank Sullivan, discussed these themes when answering a question on end demand:

We don't see any signs that it's dipping down or going to go negative, and we have every expectation that that momentum in U.S. industrial spending and U.S. non-residential construction and infrastructure spending is going to build momentum.

Indeed, the market appears to be anticipating this shift, because Sherwin-Williams (which generated 70% of its sales from its paint stores and consumer group segments in 2013) has underperformed its peers this year. In addition, Valspar has seen strong growth in its paint division (up 10% in its most recent quarter), and even its coatings division (also up 10%) has seen strong growth thanks to its housing market-related wood product line. It's notable that Valspar has also underperformed RPM International and PPG Industries.

With regard to PPG Industries, its strength is probably due to its specific exposure to the automotive and aerospace industries, the outperforming parts of the industrial sector.

Why RPM International?
The difference with RPM International is that any improvement in industrial markets and commercial construction in 2014 is likely to drop into significant margin improvements for the company. Even better, the company is already increasing its gross margins without a pick-up in these markets, thanks to a number of initiatives. For example, in its first nine months, gross margins increased by 90 basis points to 42.4%.

Margins and weather
The good news is that Foolish investors have reason to expect more of the same in the future, for two key reasons. RPM International generates its income from a mix of its industrial and consumer businesses. 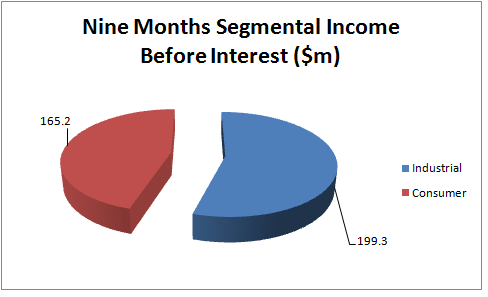 First, according to management on the conference call, industrial margins are likely to improve:

We expect this steady improvement in sales growth and operating profit leverage in our industrial segment to continue in the coming quarter. ... [O]n the industrial side, I think you're going to continue to see some operating margin leverage, particularly as the volumes come back.

Meanwhile, the improvements in its consumer operating margins were described as "sustainable."

Second, its consumer business is expected to bounce back in future quarters following a tough third quarter, where sales declined 2.7% because of poor weather. RPM International generates 90% of its consumer sales from North America, and the weather took its toll on the segment.

The bottom line
All told, RPM International has good prospects for 2014. Analysts have the company on EPS growth of 17% and 2.6% for the years to May 2014 and 2015, respectively. On a P/E ratio of around 20 times 2014 earnings, the stock is hardly cheap. However, if you're convinced that U.S. industrial spending and commercial construction are likely to surprise on the upside, then RPM International can outperform thanks to its margin expansion potential.