American Express (NYSE:AXP) leads the Dow Jones Industrial Average (DJINDICES:^DJI) down today as the financial sector drops. The broader stock market is being hurt by the continuing sell-off in the tech sector, which Dow tech stocks have so far avoided, given their relatively low valuations. As of 1:20 p.m. EDT the Dow is down about 200 points to 16,237. The S&P 500 (SNPINDEX:^GSPC) is down 30 points, or 1.64%, to 1,841.

The market is down despite two positive U.S. economic releases: 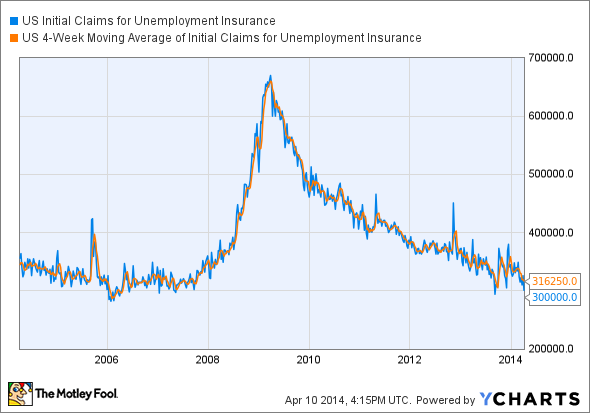 Today's great unemployment claims report and dropping market illustrate perfectly the concept that the markets and the economy are not one and the same. While the economy and the jobs market are slowly growing stronger, the market already has much, if not all, of that growth priced in. The market has also priced in some high expectations for certain parts of the technology and biotech sectors. For this reason, whenever there is fear in the market, these stocks are hit hardest. The Nasdaq 100 is down 2.8% so far today, led downward by health care and biotech companies.

Dow component American Express had a victory today after a judge dismissed a lawsuit against accusing American Express, Citigroup, and Discover Financial Services of colluding to require disputes between customers and credit card companies to be settled through arbitration rather than lawsuits. Visa and Mastercard were not sued, as they only process transactions on behalf of banks. Banks themselves issue the cards and set the policies on them. This differs from American Express' and Discover Financial's business model, where they process transactions and issue cards to their members, taking on credit risk. In any event, this is a win for credit card companies and a loss for consumers, many of whom believe that arbitration clauses favor banks.

While stocks may fluctuate in the short term, the key to investing still remains buying great companies at good prices and holding for the long run.