Without much fanfare, 3M (NYSE:MMM) has been one of the top-performing stocks on the Dow Jones Industrial Average over the past year. 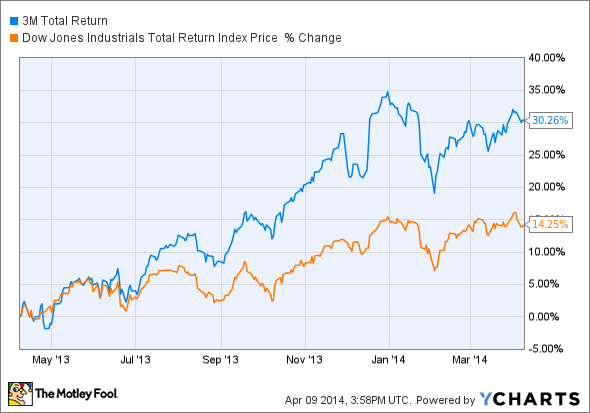 One of the driving forces of the gains has been increased organic growth, which, combined with steady dividends and value, has recently come back to favor in the market. So, can this run for 3M continue?

Is growth back at 3M?
One of the most important things for investors to see at 3M is growth. Large, diverse conglomerates like 3M just don't grow like smaller companies so any hint of growth is good. Plus, if dividends are going to increase and the company is going to earn its 20 P/E ratio, both revenue and earnings are going to need to increase.

Over the last few years, the growth story is somewhat mixed. In 2013, sales were only up 3.2% to $30.9 billion but organic growth was higher than that at 3.4%. A 1.6% drag from foreign currency translation kept growth from reaching over 5%, which would have been outstanding in a slow growth environment globally. 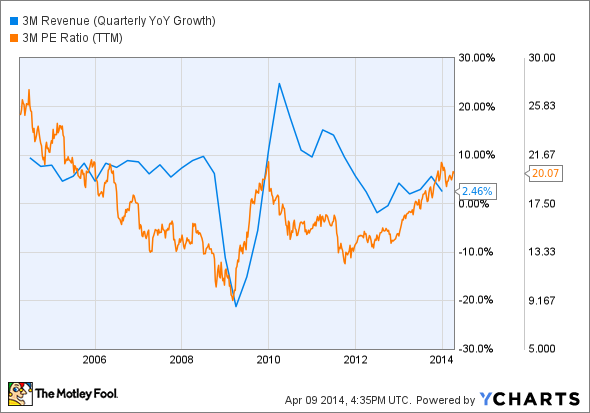 From year to year, currency will either help or hurt 3M, which generates about 70% of its sales overseas, so the increase in organic growth is important to watch. It's also the biggest unknown for the company today.

CEO Inge Thulin has put a renewed emphasis on R&D, which should eventually result in organic growth if done efficiently. But there's a two- to five-year lag from when those investments are made to when they pay off, so we need to see organic growth remain above 3% and would like to see it closer to 5% for this stock to be a great buy.

The other challenge is that 3M's P/E ratio is slightly above historical averages. It was actually margin expansion, not earnings growth that drove 3M's stock in 2013 so earnings growth will have to catch up eventually to keep the stock on the rise.

Can 3M remain highly profitable?
Growth is great, but if 3M can't grow profitably, it won't matter. That's one of the great balancing acts for a high-margin manufacturer like 3M.

So far, management has been able to maintain margins, as you can see below, and that will be key in the future. 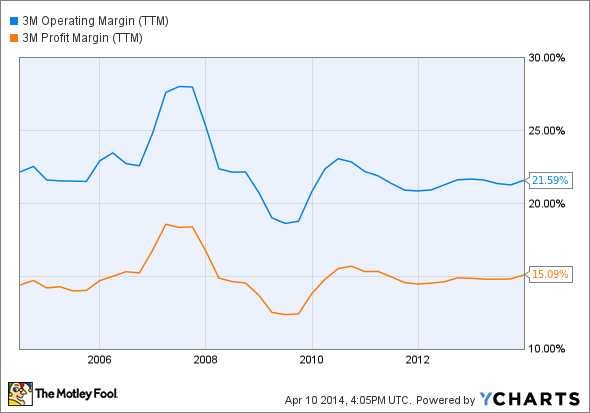 The challenge for 3M has always been maintaining high margins as low-cost suppliers from Asia increase their capabilities. Margins are something to keep an eye on but I don't see this as a big risk factor going forward.

A dividend as rock solid as it gets
The best thing 3M has going for it is a dividend that's unshakable. The company has paid a dividend for 388 straight quarters and increased its dividend for 55 straight years.

With such a diverse set of end markets and world-class manufacturing technology, I would feel comfortable with 3M's dividend for decades to come. Growth and margins, which I discussed above, are important, but at the end of the day, it's the dividend that investors take away from 3M.

Foolish bottom line
3M isn't a cheap stock by any means at 20 times earnings, but the steady performance and upside growth potential is worth it for investors. If your timeline is more than five years, 3M is a great buy and I think there's significant upside if growth picks up.