You'd be hard-pressed to find a sector that's as capital intensive and competitive as the airline industry. It literally takes billions of dollars these days to get an airline company off the ground. The costs of fueling, maintaining, and purchasing new aircraft, as well as paying unionized pilots and flight attendants, is enormous and often leaves only a very small profit margin left over. 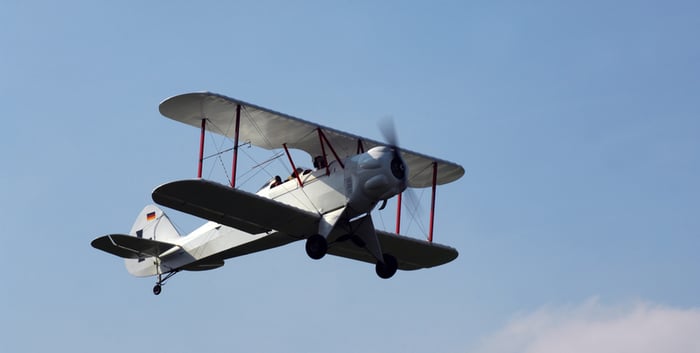 Check out the age of an airline's fleet before you book. Image source: Getty Images.

There are a number of variables that ultimately determine the success or failure of an airline. These factors can include everything from the cooperation of external costs such as jet fuel prices and public perception of the airline industry, to internal factors like labor union cooperation, total debt levels, and the overall age of company's fleet.

Today, I want to focus on that last key point, airline fleet age, because I believe that it's a major component to an airline's success. We'll get into the mechanics of whether older or younger fleets are better, and what advantages and disadvantages each group offers in a minute, but let's first look at where each of the 15 U.S. airlines rank among fleet age.

The nation's airline fleets
For my research I used data compiled by AirFleets.net. By its own admission, AirFleets' calculations are limited to its current subset of what it refers to as "supported aircraft," which covers a number of Boeing and Airbus models. In other words, these figures should be fairly close to accurate and will give us a good idea of fleet age, but they may not be right on the money.

Without further ado, here are the fleet age rankings from newest to oldest for the nation's 15 largest airlines:

As you can see, from top to bottom, the age of aircraft in service more than quadruples!

Advantages and disadvantages of a newer fleet
Generally speaking, newer aircraft certainly offer their share of advantages over older aircraft. For example, newer aircraft have better fuel efficiency which results in lower fuel costs. This is important since fuel is often an airlines' biggest expense, so reducing fuel costs can go a long way to boosting margins. This is one reason that Spirit Airlines, despite being a deep-discount national airline, decided to go the route of purchasing newer planes rather than cheaper secondhand planes.

Secondly, newer planes tend to be more comfortable for passengers; they boast Wi-Fi technology, entertainment systems, and a number of updated features. These might seem like trivial technology additions, but they're the type of add-ons that can help drive loyalty in a very cost-conscious industry. I would contend that there's no coincidence that privately held Virgin America ranked highest in U.S. customer satisfaction and that it also has the youngest fleet of the group.

In addition, newer planes have little need for maintenance, meaning that airlines with younger fleets can focus on improving capacity and worry less about whether or not their planes are going to stay in service or require maintenance.

But don't think that new planes are the answer to everything. One factor that airlines and investors should consider is that new planes aren't cheap, and purchasing new planes to take advantage of the fuel and maintenance savings has the potential to put an airline deep into debt. American Airlines Group (NASDAQ:AAL), which is comprised of AMR and US Airways, has hundreds of planes on order over the coming two decades, but it also boasts $20.6 billion in total debt. This debt doesn't give the company a lot of flexibility, even post-merger, when it comes to making any strategic moves.

The answer for many of the majors is to turn toward leasing companies which offer the best of both worlds -- the potential to lease a newer aircraft with better fuel efficiency over a fixed time period without a $200 million upfront charge for a new aircraft. For leasing companies such as FLY Leasing, high aircraft pricing provides a consistent stream of customers and steady cash flow which allows it to stay ahead of the curve with newer aircraft purchases. As long as oil prices remain high and plane prices continue to rise (both very feasible scenarios), leasing companies like FLY should benefit.

Advantages and disadvantages of an older fleet
With that being said, there are a number of clear disadvantages to an older fleet. Obviously, worse fuel efficiency is going to be a big extra cost for the bottom rung of airlines, such as Delta Air Lines and Allegiant, which are running, by far, the oldest fleets.

Passenger comfort and amenities could also be affected as a number of older airplanes simply don't have in-flight entertainment systems. Airlines like Alaska Air have done their best to counter this with its digEplayer, a small, portable, downloadable entertainment device which flight attendants pass out during the flight and collect toward the end of a flight for a nominal fee. Not surprisingly, though, a number of the worst performers in overall customer satisfaction also have some of the oldest fleets.

On the flip side, operating an older fleet can have its advantages -- just ask Allegiant. Although Allegiant pays more in fuel costs than its peers for an equivalent amount of miles flown, it also pays far less out of pocket to acquire used planes. This difference has allowed Allegiant to remain one of the few airlines that's net cash positive, and gives it the opportunity to focus on the deep-discount niche where consumers are looking for a no-frills flying experience as long as the flight is cheap.

One final thing worth noting
Lastly, I think it's worth noting that Southwest Airlines is slowly wiggling down the list when it comes to overall fleet age. Comparatively speaking, 11.7 years isn't horrible, nor is the 10.9 years from its subsidiary AirTran. However, we're seeing an interesting twist from Southwest -- it's taking a page out of Allegiant's book and purchasing used jets from WestJet in order to cut capital spending through 2018 by approximately $500 million. The move will certainly allow Southwest to remain competitive on pricing and likely allow it to continue its "bags fly free" program for many additional years.

This approach could set the airline up to feel more pain than the majors would if fuel prices rise dramatically. It also runs the risk of alienating its core customers if the older planes are less customer-friendly when it comes to Wi-Fi, entertainment, and so on. Needless to say, Southwest is certainly reaching an inflection point, and it's definitely worth keeping an eye on.

How Old Is Your Plane? These Airline Fleet Age Rankings May Surprise You @themotleyfool #stocks $ALK $LUV $SAVE $ALGT $AAL Next Article
Current