Verisk Analytics (NASDAQ:VRSK) isn't a sexy stock, and it doesn't attract a lot of media hype, but it's a steadily growing big data company Warren Buffett has owned for years.

As the country exited the financial crisis In 2009, Buffett and Verisk's other insurance company owners, including Hartford Insurance and AIG, decided to spin off Verisk to raise money to support their struggling balance sheets.

But Buffett's Berkshire Hathaway (NYSE:BRK.A)(NYSE:BRK.B) was the only pre-IPO owner not to sell into Verisk's IPO, and Buffett still owns 1.5 million Verisk shares as of December. So, let's take a look at why Mr. Buffett remains a fan of this data crunching company. 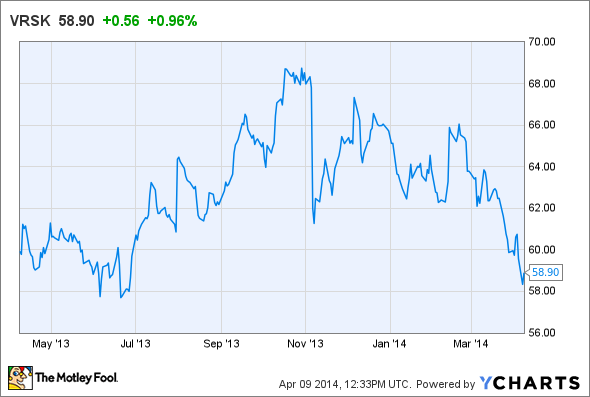 Born from insurers
In the insurance business, it's all about identifying and pricing risk. The better able you are to figure out whether a claim will be filed, the better able you are to price insurance for a profit. Verisk's data mining solutions do that every day for all 100 of the largest U.S. property & casualty insurers. Those 100 insurers make up 85% of the $540 billion in P&C premiums written last year.

Verisk's roots stretch back to 1971, when a consortium of insurers decided they could get better answers cheaper by combining their data analysis efforts. Over the years, savvy acquisitions and product development expanded Verisk's product offering to include underwriting, claims management, compliance, and portfolio analysis, too. The combination of more services and a top-shelf customer base has allowed Verisk's insurance business to grow by a compounded 9% annually over the past decade. Expanding into health care
While the majority of Verisk's revenue continues to come from the insurance market, Verisk's abilitiy to compile, crunch, and conveniently report data is resonating with other industries, too.

Increasingly, practices and processes that were formerly driven by empirical -- and highly subjective -- estimates are migrating to quantitative analysis. As a result, Verisk's products and services appeal to financial services companies like credit card issuers as well as health care companies, including insurers and providers.

Despite a short history of serving the health care industry, 232 health care payers have already signed on with Verisk, including 9 of the top 10 insurance plans.

Another 26 health care providers, including physician networks, as well as 61 employers, have inked deals with Verisk to help them with claims, risk modeling, Medicare Advantage risk adjustment, and quality auditing.

That demand has sparked Verisk's health care sales, driving them up from just $50 million in 2009 to more than $270 million in 2013. That's impressive, but it only hints at the larger market potential, which Verisk estimates exceeds $4 billion annually.

Of course, Verisk isn't the only one trying to work with health care companies. Verisk competes directly with United Healthcare's (NYSE:UNH) OptumInsight, a company that offers a suite of analytic and consulting services to health care players.

United's position as the largest U.S. health insurance company has given OptumInsight immediate cache, helping OptumInsight build a backlog north of $5.5 billion exiting 2013. United expects $2.7 billion of OptumInsight's backlog will be realized this year, of which roughly $1 billion is tied to other United companies. Even considering the inter-business sales, OptumInsight is still arguably Verisk's stiffest competitor in the health care sector.

Fool-worthy final thoughts
Verisk's Buffet-appeal isn't limited to the competitive advantage it maintains thanks to Verisk's large and growing datasets. It's also tied to the businesses' highly attractive -- and profit-friendly -- ability to build a product once, and sell it many times.

Whether Verisk can remain differentiated enough to outpace United Healthcare's Optum and McKesson is a question still to be answered. All three companies are increasingly going to bang into one another in board rooms as the industry grapples with improving care and reducing costs post reform.

However, since all industries are eager to boost profitability, it would seem Verisk may find it has long-term opportunity that stretches far beyond where it sits currently.