The U.S. Census Bureau's monthly retail sales update was that rare economic release so far this year to genuinely cheered market watchers. American retailers grew overall sales by 1.1% month over month in March -- ahead of economists' expectations for a more modest 0.9% improvement. Since much of this was expected to rise on spring-thaw driving demands -- the expectations were for a modest 0.4% month-over-month gain in retail sales without vehicle or gas-station sales -- a full 1% bounce without any auto-related spending was more cause to cheer.

Major indices have reversed last week's miserable showing thanks in large part to this show of retail strength. The Dow Jones Industrial Average (DJINDICES:^DJI) was up 0.95% at 12:45 p.m. EDT, while the S&P 500 (SNPINDEX:^GSPC) had risen to a roughly 0.97% gain. Several of the Dow's key retail components are leading the charge, with Visa (NYSE:V), the index's most heavily weighted component, also its largest gainer with a 2.6% improvement this morning. Wal-Mart (NYSE:WMT) and Nike (NYSE:NKE) are also moving the Dow higher with gains in excess of 1%, but since only three of the Dow's 30 components were in the red by early afternoon, its rise can hardly be credited solely to retail's strength.

The last retail sales update was so disappointing that it almost appeared that the economy was retracing its pre-crash path, as seen from 2004 to 2009. However, the March sales boost was the highest month-over-month improvement since September 2014: 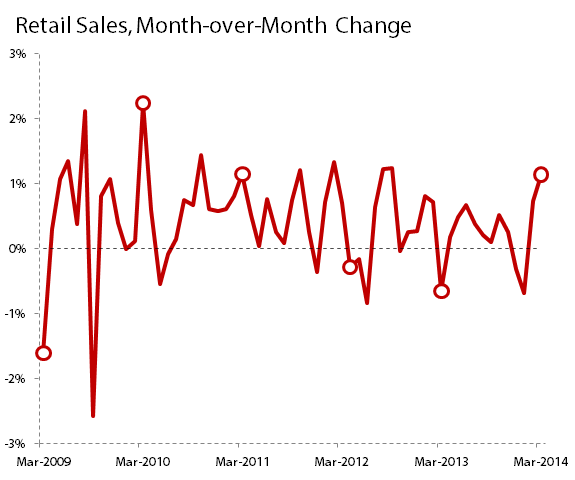 This uptick also produced a big surge in year-over-year retail sales, which returned to the 3%-or-greater growth rate seen in every single month of updates from December 2009 to December 2013, after which weak sales in January were widely blamed on weather woes across much of the East Coast and Midwest: 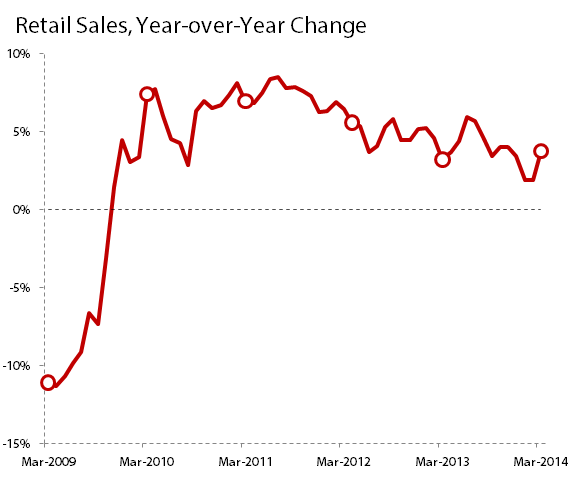 As you can see, it's too early to declare victory over the inevitable pressures of the economic cycle. In fact, despite this month's momentum, the three-month average for year-over-year changes in American retail sales continues on a generally downward trend. What this means, in general terms, is that we are probably much closer to the end of an economic growth cycle than to its beginning. 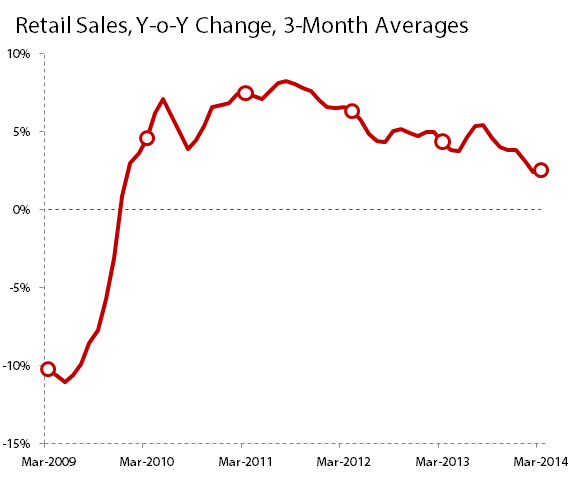 To see why, all we have to do is examine the five-year period preceding this one, which ended in one of the worst economic crises of the postwar years: 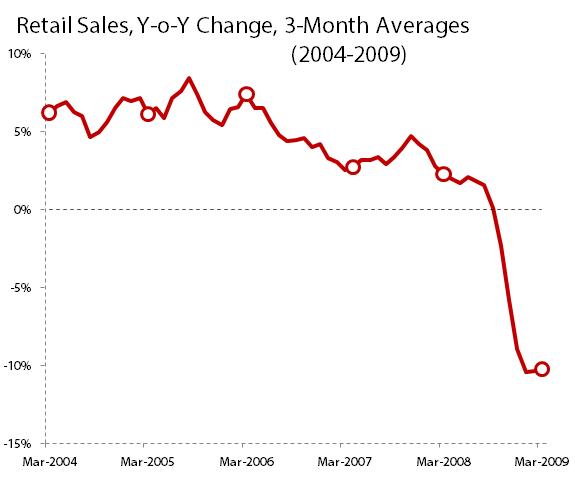 There's a similar trajectory from larger initial growth (the economy endured a brief recession in 2001, but the Dow actually bottomed out in late 2002) toward smaller and smaller growth rates, before sales collapse entirely. This does not necessarily mean that the economy will sputter out as retail sales tighten further. In fact, the growth of the 1990s shows a somewhat different trajectory: 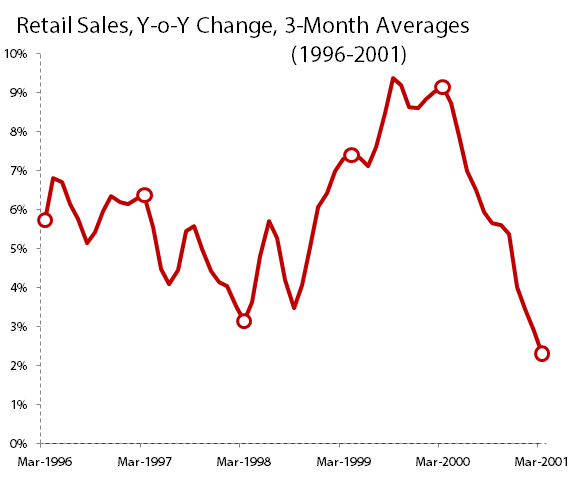 No expansion lasts forever, but some end much more violently than others -- the end of the dot-com expansion never pushed this year-over-year three-month average into negative territory, as it bottomed out at a 1.7% growth rate in September 2001.

What sectors of the economy are propping up American retail sales today? Despite the fact that auto sales were a smaller slice of the overall sales pie, this sector continues to be one of the nation's strongest -- its 9.5% year-over-year improvement in March was by far the largest of any sector tracked by the Census Bureau, and that's been the case for quite a few of the months following the recession's end: 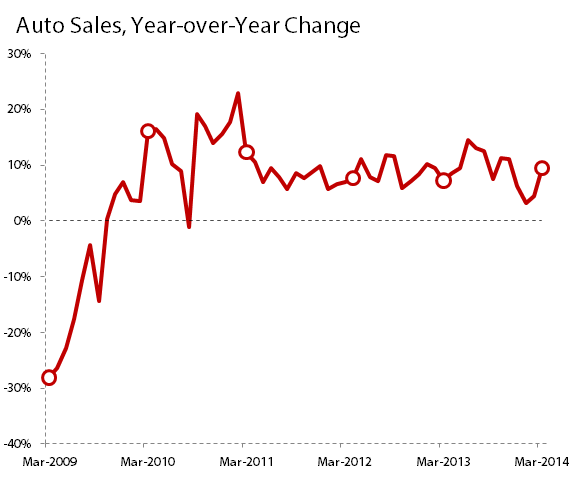 The only sector to put together similarly impressive year-over-year growth so consistently is the nonstore retail sector, which includes e-commerce retailers such as Amazon.com. 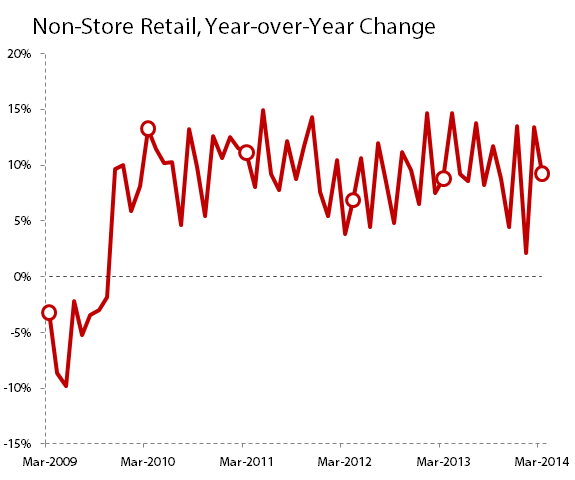 Over the last few years, these two sectors of the American retail economy -- along with gas stations and building-supply retailers such as Home Depot -- have been key drivers of retail strength, making up for the weaknesses of other crucial sectors since 2009. The following chart shows just how much several major retail sectors have grown monthly sales since March 2009: 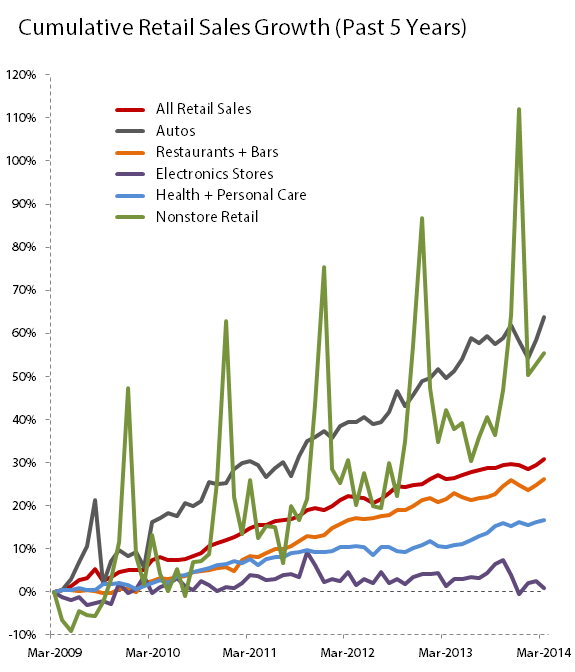 This chart contains a few surprises, particularly in the revelation that neither food service nor health and beauty (a sector that includes retail-level pharmaceutical drug sales) has produced even average growth over the past five years. Electronics stores, which have suffered a stock market bloodbath in 2014, have failed to improve monthly sales by so much as 10% over March 2009, which should be an incredibly easy starting point to beat in the first place.

March offered some strong retail sales numbers, but that doesn't mean the economy has years of growth ahead. For the moment, however, there appears no reason to panic -- the American consumer is still buying and the American economy is still growing. The next few months of retail sales reports may wind up becoming more important than most as we head further into a period of slowing long-term growth.