Berkshire Hathaway's portfolio consists of 43 companies and is worth $92 billion. In 2013, the company purchased nearly 1% of ExxonMobil (NYSE:XOM). This represents about 3.5% of Berkshire's overall holdings and about 50% of its investments in the energy sector. With a move this big investors might ask if they should consider purchasing Exxon themselves. This article will explore the potential reasons for Berkshire's investment in Exxon and explain why Chevron (NYSE:CVX) makes a better long-term investment.

ExxonMobil and Chevron are America's two largest oil companies. They are very well diversified across the upstream and downstream segments, as well as internationally. Chevron also owns substantial refining capacity, while Exxon has a large position in chemical manufacturing (such as automotive oils). In addition, both companies have extensive retail exposure with their branded gas stations.

They are fundamentally great long-term investments for several reasons.

On the production expansion front, the company is pursing over 120 projects to produce a total of 24 billion barrels of oil. Twenty-four of these projects are scheduled to come online by 2017, including 10 in 2014 (2014's projects will increase daily production capacity by 300,000 bpd).

Despite the decreasing investments, management is guiding for flat production growth in 2014 and 4% increased oil production in 2015-2017 (gas increases of 1%). The increased production and lower costs will result in margin growth on (already) above industry average profitability.

Adding the fundamental strengths just mentioned to Exxon's investing history makes a good case for owning the stock. In the last 21 years Exxon has returned 12.5% CAGR (with dividend reinvestment), compared to the market's 9.5%. The company is a dividend aristocrat with 31 consecutive years of payout increases (dividend growth of 6.11% CAGR for the last 20 years).

As a final cherry on top, the company is trading at an 18% discount to its historical valuation (21-year average P/E of 15 versus 12.3 today). On a yield basis, Exxon is now the cheapest it has been in three years.

All of this makes a strong case for owning Exxon shares, except for one problem: Chevron is as strong of a company and a better relative investment.

Why Chevron is better

As seen above, Chevron, despite being just as safe and diversified an oil giant, outperforms Exxon in the areas investors care about most: earnings growth, profitability, yield, and dividend growth.

Chevron is also a dividend aristocrat with 25 years of consecutive dividend increases.

However, the largest reason for investors to choose Chevron over Exxon is the company's near-term growth prospects.

Over the next four years, Chevron plans to increase its capacity by 20%, from 2.6 mboe/d to 3.1 mboe/d. It plans to maintain its 2014 capex rate of $35.8 billion through this time, and to spend the funds on deepwater offshore drilling, shale oil, and the Tengizchevroil consortium. This last project is a partnership of companies developing the Tengiz super-giant oil field in Kazakhstan. Chevron owns 50% of the consortium.

The increased production, when combined with flat capex, will likely result in dividend growth accelerating to about 9% annually over the next five years. 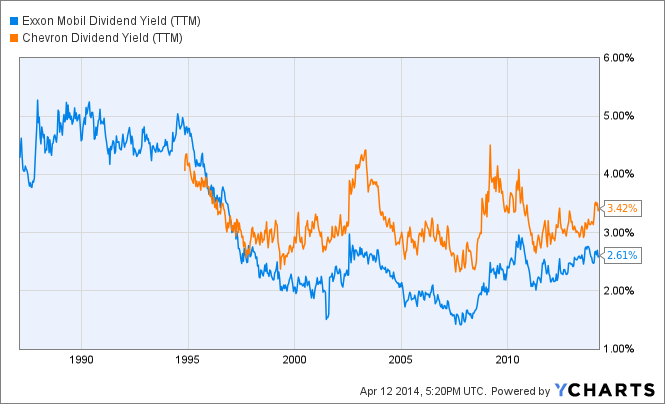 As seen in the above chart, both Chevron and Exxon are trading at their highest yields since 2011. Given the massive size and scope of their businesses, investors can be assured that neither company's survival is ever likely to be threatened. This makes either company a good "buy and hold forever" investment.

Chevron's recent price weakness is a result of an earnings warning issued by the company. Poor weather in the U.S., Canada, and Kazakhstan during the fourth quarter, along with increased refinery maintenance and foreign currency effects, will cause the company to miss earnings by about $0.2 per share.

Investors can use this short-sighted market overreaction to accumulate undervalued shares and lock in a historically high yield with probable strong dividend growth in the years to come.

Foolish takeaway
ExxonMobil is a terrific company, and investors are likely to do well owning its shares over the long term (especially given how undervalued it is). However, due to its higher yield, faster dividend growth, and better short- to medium-term growth prospects (as well as higher profitability and equal undervaluation), I believe Chevron is a better long-term investment.