The Dow Jones Industrial Average (DJINDICES:^DJI) reversed the day's losses by midafternoon and was trading up 53 points while investors prepare for earnings season to move into full swing. The National Association of Home Builders/Wells Fargo housing market index rose to 47 in April from a revised 46 in March, which was a rebound below the expectation of 50 from economists polled by Reuters. A reading below 50 means builders view market conditions as less favorable.

"Headwinds that are holding up a more robust recovery include ongoing tight credit conditions for home buyers and the fact that builders in many markets are facing a limited availability of lots and labor," NAHB Chief Economist David Crowe said in a Reuters report.

Investors hope for a strengthening housing market this year to strengthen the economy and bolster the markets. With that in mind, here are some companies making headlines today.

Inside the Dow, General Electric (NYSE:GE) was up 0.51% on reports that CEO Jeff Immelt may step down sooner than his expected 20-year tenure.

The industrial conglomerate is also gearing up to release its quarterly earnings report on Thursday. Analysts expect GE to post earnings per share of $0.32, which would be nearly 18% lower than last year's result. Revenue is also expected to decline 1.7% to $34.41 billion.

General Electric has spent years spinning off underperforming businesses and is much more stable after distancing itself from its GE Capital business. Now GE is focusing on its industrial portfolio and energy infrastructure businesses to fuel future growth.

One item investors should look for in General Electric's first-quarter report is its backlog of orders, which is a good near-term indicator of how strong demand is for GE's products. The company's backlog swelled 8% to a record $244 billion in the previous quarter. GE has beaten earnings estimates three out of the last four quarters; if it can do so again, while increasing its backlog to a new record high, investors should be pleased with the company's prospects for the rest of 2014.

Outside the Dow, Ford (NYSE:F) said it in March posted its 10th straight month of year-over-year sales gains in Europe. The Blue Oval outpaced the industry sales volume increases of 10% in March and 8% with growth of 12% and 11% for those respective months.

"Our first quarter sales results show that our plan to invest in product and launch more new vehicles -- 10 alone in 2014 -- is beginning to have a very positive impact with customers," said Roelant de Waard, vice president, marketing, sales and service, Ford of Europe, in a press release. "Just as important as absolute sales growth, we are growing our business with retail customers and desirable fleet customers."

One thing to look for in Ford's first-quarter report near the end of April is its losses in Europe. 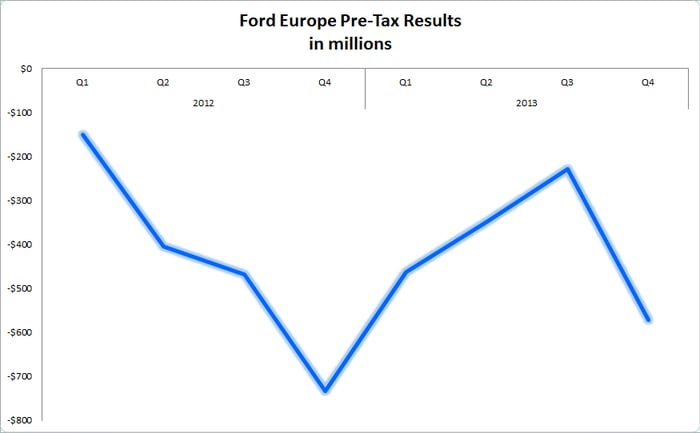 As Ford continues to make sales progress in Europe, investors are hoping the company can break even in the region as quickly as possible -- a development that would save billions of bottom-line profits. Management has held to its prediction of breaking even or posting a small profit in Europe during 2015.