New York manufacturing growth is slowing significantly for April, according to a new report (link opens as PDF) released today by the New York Federal Reserve.

Comprised of surveys from around 100 New York executives, The Empire State Manufacturing Survey attempts to determine whether certain components of manufacturing have experienced growth (positive number), or contraction (negative number). Investors watch New York manufacturing (and other regions, as well) as a possible signal of larger economic upswings or downturns.

For April, the survey's general business conditions index clocked in at just 1.29 points, down from March's 5.61 reading and significantly below analysts' expectations of a stronger 7.50. After soaring to a near two-year high at the start of 2014, this month's report puts growth back near the stagnant final months of 2013. 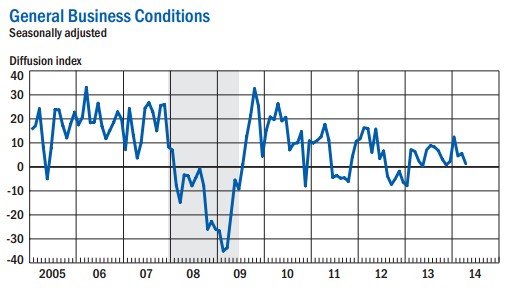 With today's report showing lackluster present growth, analysts will be keeping a close watch on Thursday's Philadelphia Federal Reserve report for any larger signs of trouble.