Since the end of February, the iShares NASDAQ Biotechnology Index has been hammered by about 19%. The most speculative companies have been the hardest hit, but several gems (with marketed products driving growth) have also taken a beating.

Biogen Idec (NASDAQ:BIIB) has fallen about 19% over the past month. Celgene (NASDAQ:CELG) recently fell to levels it hasn't seen since last August. Pricing fears hit Gilead Sciences (NASDAQ:GILD) hard in the middle of a record-breaking product launch. The stock has given up nearly 18% in the past month.

All three companies expect surging growth from commercial stage products. So let's take a closer look at the opportunities the recent sell-off has provided. 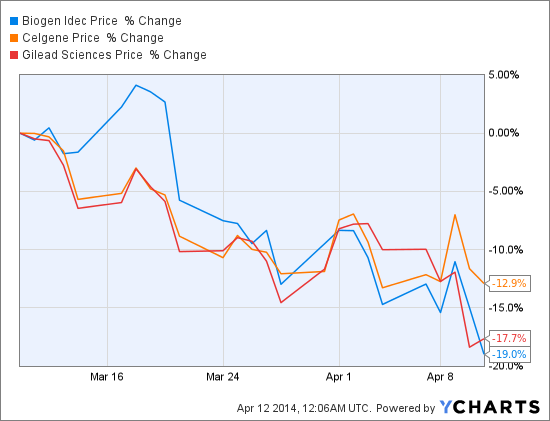 Full of surprises
Biogen investors have seen their shares decline by about 19% over the past month on no meaningful news. The company's forward price-to-sales ratio dropped from nearly 10 at the end of March, to about 7.6 at the end of last week.

About the worst that's happened to Biogen (during the sell-off) was a delay in the FDA's review of Plegridy. The regulator didn't ask for more studies, of the injectable multiple sclerosis (MS) treatment, just more time to complete its review.

A forward P/S ratio of 7.6 isn't exactly cheap, but Biogen has a reputation for underestimating its growth potential. To begin 2013, company guidance estimated a 10% increase in annual revenue. Last year's revenue totaled $6.9 billion, a 26% increase from the previous year. Earlier this year, the company guided for 2014 revenue growth of between 22% and 25%. Hopefully for investors, its estimate is off by a similar margin this year.

Last year's pleasant surprise was driven by an incredibly successful Tecfidera launch. Within less than a year it became a leading oral MS therapy, reaching $398 million in the most recent quarter, $390 million of which was from the U.S. alone. European rollouts take much longer than in the U.S. as reimbursement agreements are hammered out in one country after another. There's bound to be some deceleration, but Biogen's MS franchise still has lots of room to grow.

Last year, Pfizer (NYSE:PFE) recorded $832 million in sales of its hemophilia B therapy, BeneFIX. Biogen's Alprolix remains in patients at effective concentrations more than twice as long as Pfizer's alternative. Reducing the frequency of infusions by about half is a big incentive to switch therapies. Keep your eyes open for sales figures from this program.

All clear
Celgene's story is similar to Biogen's. Its forward P/S ratio recently fell to about 7.4, a level it hasn't seen in almost a year. The stock has fallen about 12.9% over the past month without a whiff of misfortune.

Recently, Celgene took an important step toward wrestling market share away from top selling drugs like AbbVie's Humira. Last month, Celgene's Otezla won FDA approval for treatment of psoriatic arthritis. An application for the much larger plaque psoriasis indication is under review, with a decision expected in September.

Unlike Humira and other TNF-blocking injections, Otezla is a pill that doesn't carry a boxed warning. Some patients may even consider its most common side effect as an added bonus. During clinical studies leading to its approval, about one-tenth of patients reported a 5% to 10% weight loss.

The source
Unlike Biogen and Celgene, the source of Gilead's recent fall is clear. Backlash over the price of its hepatitis C treatment has been intense. Medicaid authorities from several states are attempting to limit Sovaldi access to patients with the most critical need. Even members of Congress and the World Health Organization have taken turns criticizing Gilead's pricing rationale.

In the weeks following the launch of Sovaldi, Gilead's forward P/S ratio spiked above 11 before stabilizing around 8. The stock finished last week at just 6.3.

At around $66 Gilead looks like a good potential investment despite Sovaldi pricing fears. The company's late stage pipeline is also promising. Last year, chronic lymphocytic leukemia, or CLL, patients receiving idelalisib showed a high enough increase in progression free survival that investigators recommended stopping the trial early. Applications for the oral PI3K inhibitor are under review for both CLL and non-Hodgkin's lymphoma in the U.S. and EU.

Final thoughts
Just because these great companies have fallen hard over the past few weeks doesn't mean they won't continue sliding. When an entire industry, or the market as a whole is in a slump, even the best stocks are swept along in the current. Great investors patiently wait for the opportunity to scoop up great companies at a price that they like.