Wal-Mart (NYSE:WMT) plans on bringing its everyday low prices to the organic food market. In an April 10 announcement, this major discounter listed the prices for several organic products along with the massive discounts it plans to offer. However, Whole Foods Market (NASDAQ:WFM), Sprouts Farmers Market, Natural Grocers by Vitamin Cottage, and The Fresh Market might not need to worry. While Wal-Mart is a fierce price competitor, its decision could actually result in lower supply costs for these health-food stores.

The supply chain
While the health-food stores have been known for their high prices, this isn't entirely their fault. These chains also face higher supply costs because they're pickier about what they buy, and much of the food on offer doesn't meet their standards. Supplier capabilities have also been an issue. The analyst group Trefis called the organics industry "highly inefficient" and argued that Wal-Mart's move could lower prices by convincing farmers to grow more organic food. This argument makes sense, and if this situation did come to pass it wouldn't solely benefit Wal-Mart. While new suppliers might not meet the health food stores' standards, price competition might convince some of these stores' current suppliers to cut their prices as well. There's also another factor that could expand the market.

Unmet demand
While the market for organic food has shown sizable growth in recent years, Wal-Mart has found evidence that many more people would buy organic food if they could afford it. Specifically, a survey by the retailer showed that 91 percent of its shoppers would consider buying lower-priced organic foods. This matches up with results from other surveys, as one survey found that lower-income shoppers actually reported more interest in buying organic food than higher-income shoppers did. Again, if more people buy organic food, this will drive economies of scale that will reduce supply costs for all of the health-food stores.

Merger potential
Wild Oats only exists as an independent entity because of regulators' concern that Whole Foods would monopolize the organic food space. The regulators forced Whole Foods to sell off this brand, although it still got to keep many of the grocery stores that had been run by its competitor. Whole Foods has continued to buy grocery stores from other natural and organic chains, and at the end of March it announced that it would buy four more stores in the West from the health-food chain New Frontiers. However, a bigger acquisition by Whole Foods could still draw scrutiny from regulators. Wal-Mart's move could reduce regulators' antitrust concerns. I brought this topic up before when Sprouts went public and I think that it still remains relevant. 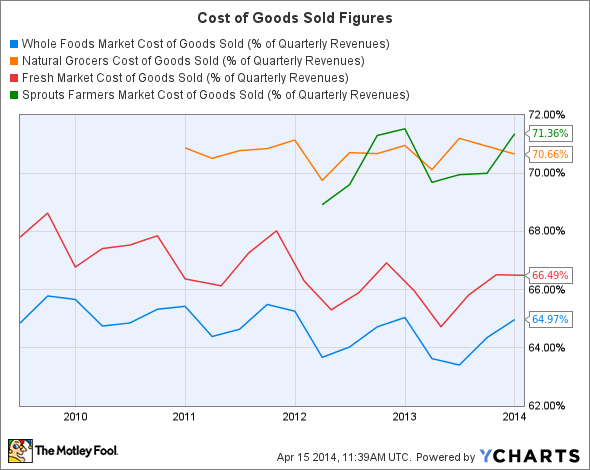 The chart covers the last five years, and Sprouts and Natural Grocers went public more recently than that, so it doesn't show all of the data for those stores. Nevertheless, the chart does clearly show that Whole Foods already has a supply cost advantage over its peers, which likely results from its size. If Wal-Mart's move does make the market for organic food more price-competitive, the chart shows that Whole Foods could have more room to cut prices than its peers do. If supply costs drop, Whole Foods will still retain its economy of scale advantages over the other health-food stores.

Foolish takeaway
Wal-Mart's move could both reduce the overall cost of organic groceries and bring more shoppers into this market. While the big-box retailer probably can offer lower prices than the natural grocery stores can, these stores can use their quality standards, wide product selections, and relationships with shoppers to fend off Wal-Mart. The customer base of the health-food stores also tends to not like Wal-Mart very much. In summary, the discounter's move could actually lead to better margins for Whole Foods and its peers.