Any investor savvy to Chinese growth stories knows about Yum! Brands' (NYSE:YUM) KFC. Since opening its first shop in 1987, KFC has reigned as the chicken king in China. Already operating more than 6,000 Chinese stores, KFC's future growth will be harder to attain. KFC has also lost favor with Chinese consumers in the face of greater Western competition and health scares.

Let's look back at how KFC won China the first time, and see whether or not the chain can do so again. 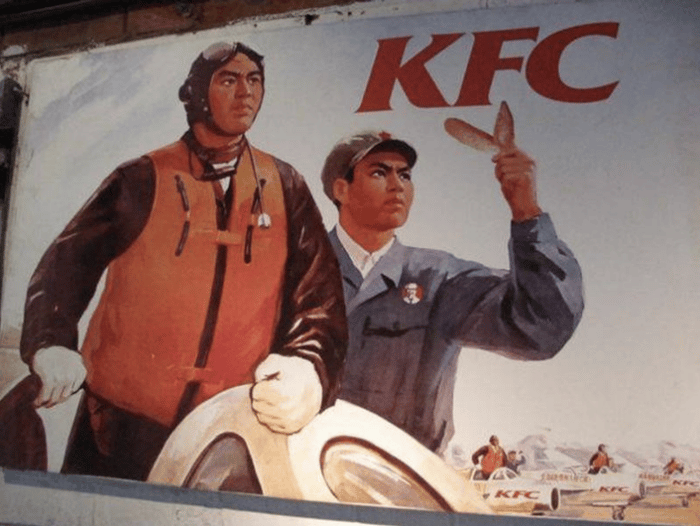 The 1980s were dynamic for China. KFC entered China in 1987, and two years later, after the Tiananmen Square massacre, KFC was the only store in the square that stayed open.

Part of the explanation for KFC's historic Chinese success story is its first-mover advantage. Arriving in the late 1980s, KFC was a pioneering American company in marketing to China. Chinese hopes for a peaceful and prosperous future were fried and served in a bucket.

Look at the above KFC advertisement from an early China branding campaign. The militarist Maoist past, represented by stoic pilots, is paralleled and parodied by China's incumbent free-market future; this is symbolized by KFC mechanics lifting chicken "wings."

The brilliant advertisement hints at what's made KFC great in China besides first-mover advantage: localization.

Fried chicken rice
KFC and other companies wishing to woo Chinese consumers cannot do so with American methods. Since its Beijing inception, KFC has operated in China with a localized mentality.

In practice, this has meant local cuisines and management. KFC does serve chicken, but its Chinese dishes are catered to the Asian palate. Walking into one of Beijing's many KFCs, diners can order rice porridge along with their fried chicken buckets. KFC has a history of hiring Chinese managers, leveraging their cultural networks and expertise for profit.

Localization and first-mover advantage have propelled KFC's wings far in China, but these tactics have fallen flat lately. Over recent years, a surge of profit-hungry competitors like McDonald's (NYSE:MCD) have pecked away at KFC's Chinese customer base. KFC has partially eaten its own sales as well after a 2012 scandal regarding its overuse of chicken antibiotics.

Finding identity
In the face of these challenges in China, KFC has stepped up this year with a fresh strategy. The chain will launch a major menu revamp (15 new items!) after extensive customer surveying. Yum!'s China CEO says that KFC will infuse its menu with innovation at least once per year moving forward. The chain is also amping up its marketing, capitalizing on local Chinese celebrities for advertisements.

As KFC recommits to localization, it had better watch the rearview mirror for Ronald McDonald. McDonald's has also set its sights on the growing Chinese middle class, and it will likely be willing to fight KFC for Chinese customers given that both companies face stagnant U.S. sales. McDonald's will add 300 China restaurants this year, a 20% increase from last year.

Foolish bottom line
KFC can't retain its first-mover advantage in China forever, but it can continue localizing and capitalizing on the special place that Colonel Sanders holds in Chinese diners' stomachs. Whether KFC can win China depends on its own innovation and on McDonald's actions. Given the explosive growth of the Chinese middle class, there's presently room for both companies to grow.