Stock markets are moving slightly higher today after a long weekend away from trading. The Conference Board said that its leading economic index, which is a composite of multiple economic indicators, rose 0.8% in March after incresing 0.5% in February. This is another positive data point for the economy and signals continued slow and steady growth.

The Dow Jones Industrial Average (DJINDICES:^DJI) responded by rising 0.16% in late trading, but there's little conviction one way or the other and only 15 of 30 components were higher.

Disney falls back to earth
Disney
(NYSE:DIS) has been one of the Dow's best stocks over the past decade but it's down 1% today and investors have to be considering whether a box office hit is in the works for this year.

Captain America: The Winter Soldier is in theaters now and has done well, grossing $587 million worldwide so far. However, this follows 2013's Thor: The Dark World and Iron Man 3, which respectively grossed $645 million and $1.2 billion. The Avengers grossed $1.5 billion globally in 2012, the third highest box office of all time, so this could be the worst year for Disney's Marvel branch since 2011.

These Marvel films have played a big role in Disney's rapidly rising net income over the past five years, and the studio business may see a decline this year. 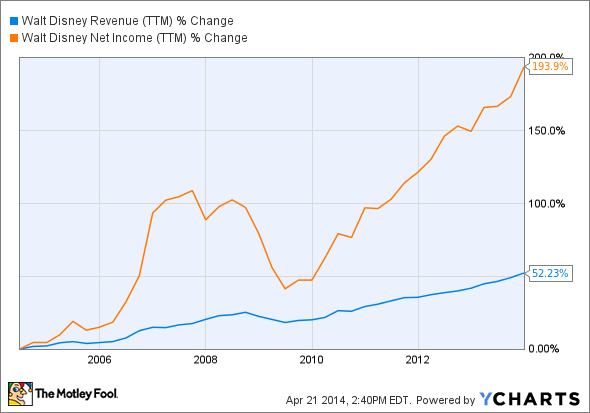 The challenge is that box office success isn't a guarantee, and movies like The Avengers only come around once in a while. This could be a down year for Disney at the box office, and that's why the stock's 22 P/E ratio looks high considering that potentially relatively slow growth from such a large company.

In the long term, Disney is still in a strong position with a very enviable set of characters, so investors should look at a sell-off as a buying opportunity. With that said, I'd like to see even more value when buying shares because investors are still pricing in a lot of growth in coming years. The current stock price leaves little room for error, something that's easy to do in the studio business.