The burgeoning e-commerce market has opened up a sea of opportunity for delivery companies. So much so that the second-largest parcel carrier, FedEx (NYSE:FDX), sees global e-commerce as one of its biggest growth drivers. FedEx's success will depend on how well it is able to mold its services to the need of the industry, however. Let's delve deeper.

Online shopping is the buzz word

Online sales are rising at an astronomical pace as more and more people discover the ease of shopping from the comfort of their homes. Even cross-border online shopping is gathering steam as it is expected to rise at an incredible rate of 200% in the next five years, most of which will likely come from China. A Nielsen survey found that cross-border shoppers will grow from 94 million shoppers spending $105 billion in 2013, to 130 million shoppers spending around $307 billion in 2018.

At present, North America is the world's largest e-commerce market with annual sales of $431 billion in 2013. However, eMarketer forecasts that this lead may be short-lived as Asia Pacific could claim the No. 1 spot this year driven by growth in China, India, and Indonesia. The research firm expects the Asia Pacific region to record staggering business-to-consumer, or B2C, e-commerce sales of nearly $525.2 billion in 2014 against North America's $482.6 billion. The chart below shows forecasts for e-commerce sales by region: 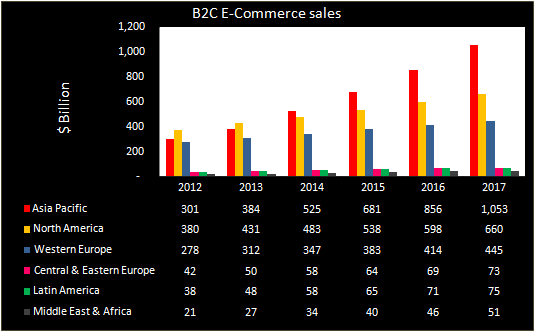 Source: emarketer.com, Chart made by author.

Increasing online retailing means a higher need for package deliveries and more business for delivery companies, provided that they tune their resources to the evolving need of the industry. FedEx is leaving no stone unturned and is realigning its business to make the most of the booming industry, which offers much higher growth compared with other conventional lines of businesses.

On the right track
FedEx has started offering streamlined courier services that suit the requirement of online retailers.

Free shipping is a major deciding factor when people shop online. It is a nightmare for retailers, however, as more than 50% of the products sold online are shipped free. FedEx has cleverly converted this into an opportunity by launching the FedEx SmartPost service, a low-cost residential parcel service that is suitable for light packages. The demand for FedEx SmartPost is driving the company's ground segment revenue up. In 2013, the revenue from SmartPost grew 18% while that of the ground segment rose 10%, year over year.

FedEx has identified another big opportunity in local deliveries. Retailers are mostly forced to rely on smaller local courier companies that give non-uniform services. As a solution, FedEx is working to increase connectivity in the remotest of places. It's opening new hubs and acquiring local delivery companies in the key markets of Europe, Latin America, and Asia Pacific.

The company already serves more than 400 cities in China, and intends to set up a cargo hub in Shanghai to increase its footprint. With these initiatives, FedEx should be able to leverage its logistics and boost profitability further.

The courier major has also developed a host of web-based services to help brick-and-mortar retailers transform their businesses into high-growth online platforms. Retailers can easily integrate FedEx's Web Services platform into their own web systems that allow them to track shipment information like the date, transit time, rate, and details of sales returns. With FedEx's Web Integration Wizard, customers can track the shipments directly via the retailer's home site.

Age-old rivalry continues
Archrival United Parcel Service (NYSE:UPS) was quick to sense the opportunity and solidified its ground transportation ahead of FedEx. FedEx was quite apprehensive to shift its focus from its express segment, though consumer preference changed in favor of cheaper delivery services.

UPS has its own economical UPS SurePost service, which is similar to FedEx's SmartPost. It also offers the feature-loaded UPS My Choice service through which customers can get notifications regarding their deliveries, adjust delivery times and locations, and get packages delivered without a signature when not at home. More importantly, it also has a partnership with online retail major Amazon.com from which it amassed huge revenue in the holiday season last December, when the former locked orders for 36.8 million items.

Quite obviously, the top courier company is now reaping the benefits. It handled an average of 16.9 million packages per day in 2013, a 4% rise over last year -- due in large part to the e-commerce boom. In comparison, Fedex's average daily packages stood at 4.2 million.

Better late than never, FedEx has finally taken initiatives to strengthen its ground logistics and the impact of these initiatives are visible in the company's improving ground revenue. The opportunity that e-commerce holds is gigantic, so even if UPS got a head start, the market is big enough to accommodate multiple players.

The boom's a boon
FedEx's strategy of addressing the e-commerce industry's challenges is pretty smart as it lays the groundwork for higher revenues. The company is devising suitable strategies like SmartPost, offering handy e-commerce tools, and expanding its delivery network in the key markets to strengthen future prospects. FedEx has played the right chords, and looks poised to make the most of the global e-commerce growth.

Is E-Commerce the Next Big Thing for FedEx? @themotleyfool #stocks $FDX $UPS Next Article
Current