Investors in the industrial sector have faced a significant imponderable over the winter. Severe weather conditions were always going hit quarterly earnings, but they were also going to make it harder to judge the underlying conditions in the industrial economy. With these thoughts in mind it's a good idea to look at industrial supply companies such as Fastenal (NASDAQ:FAST), MSC Industrial Supply (NYSE:MSM), and WESCO International (NYSE:WCC). Not only are they all exposed to the industrial sector, but they tend to have short-cycle order patterns. In other words, they get the first view on where trends are headed.

Fastenal and MSC Industrial give earnings

At the start of this earnings season, Alcoa came down on the side of those who saw the weather as the primary cause of weakness in the construction industry over the winter. The subsequent results from MSC Industrial and Fastenal offer a pretty similar story. For example, MSC's management talked of a weather-relate "slow start" in December and January, but then its organic growth rate picked up from 2%-3% to "the mid-6% range in February."

Fastenal's improvement in March can clearly be seen by looking at sales growth at its stores that have been open for more than five years: 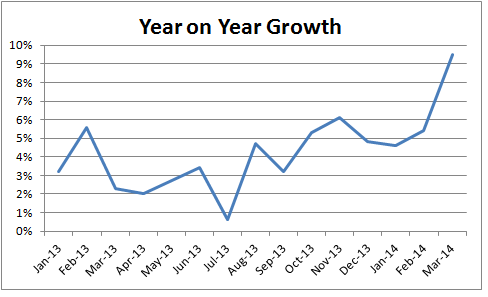 WESCO last gave results in January, and despite reporting that its sales that month were down 4% to date, the company stuck to its guidance of flat to 3% growth for the full year. Given that Fastenal and MSC Industrial have reported a rebound in growth, it's reasonable to expect that WESCO will hit its targets.

What Fastenal and MSC Industrial said about construction and manufacturing
The industrial supply companies also give good color on which specific sectors of the economy are doing well. Fastenal generates roughly 50% of its sales from manufacturing, with 25% coming from nonresidential construction, while MSC Industrial (excluding its recent acquisition of Barnes Group's North American distribution business) is more of an industrial play that generates 76% of sales from manufacturing customers. WESCO is the most exposed to construction end markets, as 32% of its sales come from the sector, with only 43% from industrial customers.

Interestingly, MSC Industrial and Fastenal served notice that the industrial sector is improving, and there are signs that nonresidential construction has started to turn the corner after a weak 2013. For example, Fastenal reported that its sales to manufacturing customers increased by 6.3% in 2013, but improved to 9% in the weather-affected first quarter of 2014 and by a solid 11.5% in March. This is especially impressive given that 40% of its manufacturing sales come from heavy equipment, a sector that includes still-weak areas of the economy such as agriculture, mining, and defense.

MSC Industrial also reported that manufacturing is trending upward. CEO Erik Gershwind outlined the following on the earnings conference call: "The manufacturing environment, particularly the metal working sector, has improved considerably from where it had been during the last 1.5 years. We've moved past the contraction that we were seeing during our fiscal 2013 and are now in what we would characterize as a moderate growth environment."

The underlying trend of improvement is also seen in Fastenal's construction related sales -- albeit at a weaker rate. Fastenal grew construction sales at 2.5% in 2013, 2.9% in the first quarter (where weather would have had a serious impact), and 7.5% in March.

The takeaway
All told, the indications are that underlying conditions are improving in the North American manufacturing sector, and to a lesser extent the nonresidential construction market. Investing Fools should expect some short-term upside from companies exposed to these markets.

MSC Industrial looks best placed in the short term due to its heavy manufacturing focus, but Fastenal's exposure to heavy equipment industries may relatively hold it back in 2014. Arguably, WESCO is the stock with the biggest upside surprise potential. Its industrial results should be solid, and if commercial construction improves then the company could outperform in 2014.