Erin McBride
(ErinAnnie)
Author Bio
Unicorn hunter, daydreamer, and contributing writer for Fool.com with an emphasis on the energy industry. 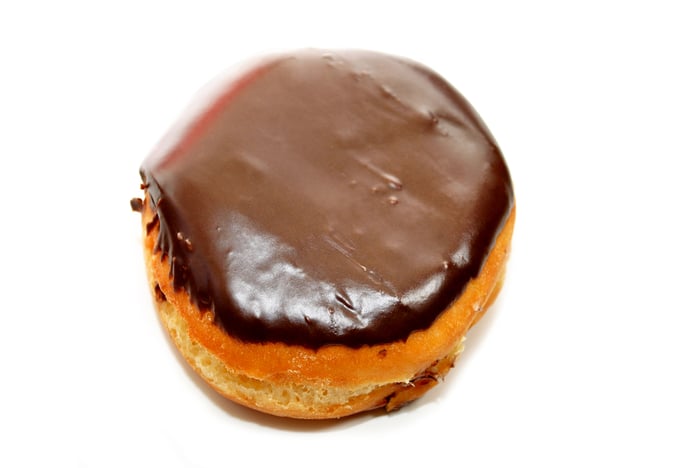 Dunkin' Brands is by far the world's largest purveyor of doughnuts, but size doesn't mean favorite. The company operates more than 18,000 points of distribution in nearly 60 countries worldwide, including 11,000 Dunkin' Donuts and 7,300 Baskin-Robbins. Meanwhile, the Krispy Kreme hot Original Glazed doughnut can be found in 21 countries, and the company operates 773 stores.

Dunkin' may operate more stores than Krispy Kreme, but everyone knows that both brands sell doughnuts in more places than just their stores. Neither company reports the number of doughnuts sold, so investors will just have to judge the companies on the numbers like they would for any other brand (followed by a thoughtful taste test, of course).

Dunkin' Brands' most recent quarterly earnings per share increased 26.5%, and revenue rose 13.3%. The company enjoyed comparable-store sales growth of 3.5% in the United States. Operating income increased 11.8% to $89.2 million, as the company expanded its operating margin 110 basis points to 48.7%. During the fourth quarter of FY 2013, 309 new restaurants were opened worldwide, which included 149 net new Dunkin' Donuts locations in the United States.

Dunkin' has seen consistent growth in average revenue per store at domestic Dunkin' Donuts locations for the last five years. Investors were also quite happy to learn of a dividend increase of 21.1% from $0.19 to $0.23 and a share-repurchase authorization.

A doughnut in the hand is worth two in the box
There may be more Dunkin' Donuts out there, but Krispy Kreme Doughnuts has carried on an impressive 21 consecutive quarters of positive same-store growth. In the FY 2013 fourth quarter, revenue increased 3.3% to $112.7 million from $109.1 million as same-store sales rose 1.6% for the 21st consecutive quarterly increase.

In comparison, for the year-ago period, the quarter ended May 5, 2013 (Q1 FY 2014), Krispy Kreme Doughnuts beat expectations on revenue and met expectations on earnings per share. Profits increased 33% on 11% revenue growth. The company brought in revenue of $120.6 million, and generally accepted accounting principles reported sales were 11% higher than the prior-year quarter's $108.5 million.

...And a coffee to go
What's a doughnut without a cup of coffee to dunk it in?

The real evidence of the company's growth and strength was seen with the expansion of 417 new locations during the quarter. There are now 4,000 locations in Asia, 2,000 locations in Europe, the Middle East, and Africa, and 20,000 total locations worldwide to get a caffeine fix. Starbucks currently has 13,279 U.S. stores.

Starbucks continues its plans for global domination by tailoring its menu to appeal to regional tastes. For instance, the Chinese menu includes more green tea-flavored drinks, while younger demographics in the U.S. are courted by mobile- payment devices. Mobile payments now account for up to 10% of the company's in-store purchases in the U.S.

No company is perfect, although each of these companies is a very attractive buy. Each chain has an area it could improve in. For instance, Dunkin' Brands could expand the number of drive-thru units and increase customer service time.

Starbucks could continue to improve its food offerings (can you imagine what would happen if it offered hot, fresh doughnuts?). And it needs to be cautious with price increases. Krispy Kreme has improved from a rough beginning on the stock exchange to becoming a truly formidable stock. The company has strong earnings and impressive management but could do better when it comes to comparable-store growth.

Dunkin' Brands saw comparable-store growth of 3.5%, Starbucks had global growth of 5%, but Krispy Kreme only showed 1.6%. Normally in the restaurant business 1.6% would be considered decent or passable, even strong. But when the competition is at nearly twice that rate, it indicates a great deal of room for improvement.

And that ultimately answers the question of who makes America's favorite doughnut. It's the company that is building the most new stores and growing sales within existing stores. All three companies are good, strong stocks, but it's Dunkin' Brands that currently wins for the title of America's Favorite Doughnut.