Tissue engineering has captured the imagination of mainstream media and investors alike. In the future, will humans be able to bioprint living tissue to repair and replace ailing or diseased tissue? Could companies eventually print functional cancerous tissue in the lab to hasten the development of oncology drugs? Tissue engineering may be in its infancy today, but it could be getting closer to reality with companies such as Organovo Holdings (NASDAQ:ONVO) developing futuristic technology platforms.

While I think investors got a little ahead of themselves with Organovo in 2013, especially considering its lengthy timeline for product revenue, I was surprised to learn the company was a leading partner with Autodesk (NASDAQ:ADSK) for a next-generation meta platform using computer-aided design for characterizing biology, or bioCAD. The collaboration was announced in January 2013, but I did not think much about it at the time. However, my recent work in the synthetic biology industry, one of the four fields targeted by the same bioCAD platform, has led me back to Organovo. 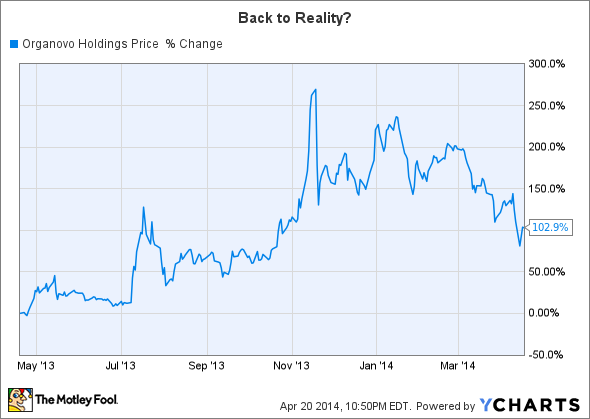 Should the collaboration change how investors think of Organovo? Heck, should investors think differently about Autodesk, which isn't traditionally associated with life sciences? I recently spoke to Carlos Olguin, head of the Bio/Nano/Programmable Matter Group at Autodesk Research, to find out more about a project - Project Cyborg - that could impact both Autodesk and Organovo.

What is Project Cyborg?
Project Cyborg is a Web-based software meta platform, or a platform that will serve as a foundation for more specialized platforms, that aims to more effectively characterize biology and nano-matter. If successful, engineers will be capable of accurately designing virtual living systems -- and finding fatal flaws in their designs -- before creating a physical real-world prototype. That would drastically reduce the time and money spent on an inefficient design cycle for producing organisms and biological systems.

Think about it: Today, designers and engineers can use Autodesk software to create, manipulate, simulate, model, and optimize virtual macro objects ranging from bicycles, to skyscrapers, to entire cities in amazing detail before a single aluminum frame is built or slab of concrete is poured. Engineers can test how a new airplane design will react to real-life conditions at an altitude of 36,000 feet before shoving a pilot in the cockpit and slamming the door. Can you imagine creating thousands of airplane prototypes, performing tests to collect data, and then calibrating the final results for each plane before having a marketable product? Maybe not, but that's exactly how we design biology today.

What makes that level of efficiency possible for macro objects? We understand macro systems and how changing variables will affect how physical objects interact with their environment. We have equations that can accurately model these interactions as each variable is altered. Unfortunately, the same is not true for smaller, more complex systems, such as a living cell. There are many interdependent variables that affect living systems, which makes it nearly impossible to get enough predictability with biology (given our current understanding). For instance, changing the temperature in a bioreactor or bioprinter by several degrees can affect cell division (affecting contamination probability), protein folding (affecting enzyme functionality), feedstock uptake (affecting time to product), dissolved oxygen content (affecting cell growth), and, ultimately, the products created by cells (affecting margins), among other variables.

Suddenly, accurately studying how temperature affects your system doesn't seem so easy, especially if you have to conduct each run in the real world in real time. The goal of Project Cyborg is to create a software tool for researchers and engineers to design biology virtually in much the same way an architect can build a house or an engineer a plane. By creating more accurate models, Autodesk and Organovo will increase the predictability of their systems and reduce the number of prototypes needed to achieve a final design.

What can Project Cyborg do for Organovo?
Well, almost exactly what is described above. Autodesk and Organovo are working together to make tissue engineering, or 3-D bioprinting, more accurate and predictable. Despite the hype surrounding Organovo's capabilities, it is important to understand that the tissues currently created by the NovoGen bioprinter are only several cell layers thick. Building larger models for toxicology testing would, presumably, lead to more accurate results and allow tissues to survive even longer than 40 days -- increasing the value to the pharmaceutical industry and selling price of each. But the number of iterations needed to go from a tissue several cell layers thick to one many times larger (that retains functionality) would require a terrifying lengthy process if conducted solely with real-world prototypes. Forget having a complete organ ready for transplantation with that design cycle.

The NovoGen bioprinter, and future iterations of the hardware, could disrupt the health care industry in profound ways. Source: Organovo.

Autodesk and Organovo are tackling the problem from several unique angles. First, the pair is integrating hardware (3-D bioprinters) into Project Cyborg to enable an end-to-end platform. That will smooth out any errors from the current fragmented approach that takes data from software and hardware that do not communicate with each other. Second, the collaborators are removing the labor-intensive laboratory steps with automated solutions. It is still a distant reality, but it is not impossible to think that a future fabrication facility for human tissues would operate almost entirely autonomously. A server could receive a request from a hospital or clinic for a tissue type, a liquid-handling robot could fetch reagents to feed to the 3-D bioprinters, and a functional made-to-order tissue could come out on the other end -- reducing overhead and in-house requirements for human scientists. Finally, what better way to learn what you don't know than attempt to model it with software? Researchers will discover which relationships they don't understand, attempt to understand them, and then integrate the interaction into the software platform.

Foolish takeaway
I believe the collaboration between Autodesk and Organovo will be necessary to create larger fully functional tissues on a timeline that satisfies investors and with accuracy that satisfies regulatory guidelines. It does not justify a lofty valuation for Organovo just yet, nor does it guarantee success. But the way I look at it, someone is going to figure out how to predictably characterize biology for tissue engineering applications eventually. Organovo seems to have the head start necessary to allow for successful platform development, and investors should not take for granted a future-focused collaboration with an industry leader such as Autodesk. Nonetheless, I'll stick to my previous opinion and remain on the sidelines until more meaningful product development and revenue becomes apparent.

Can Autodesk and Organovo Bring Tissue Engineering to a Hospital Near You? @themotleyfool #stocks $ADSK $ONVO Next Article
Current