By the end of the decade, products created from microorganisms will be in 90% of American households. Source: Amyris.

What would a computer be without transistors? Well, not much. A similar question can be asked of next-generation industrial biotech platforms enabled by synthetic biology: What would Solazyme (NASDAQ:TVIA), Amyris (NASDAQ:AMRS), or any other industrial biotech company be without organisms? And again, a similar conclusion is reached. It may not be obvious from the early days of synthetic biology, but several loose, general terms and businesses used to describe the development of highly optimized custom microorganisms will eventually be combined into one well-defined industry: the organism industry.

Today, Amazon, Apple, and Google leverage suppliers such as Intel and NVIDIA for the graphics cards, processors, and memory drives that power their electronic product portfolios rather than build massive manufacturing facilities to assemble chips and phones/tablets/computers. In the not-so-distant future, industrial biotech companies will be able to leverage the infrastructure of companies that specialize in building organisms and programming genomes rather than build their own in-house capabilities. They'll simply specify a chemical or material needed for commercial production, place an order, and receive a fermentation-ready organism in several months' time.

It may seem farfetched or too good to be true, but I'm sure you can see the power of such infrastructure. And in fact, the foundation of the organism industry is being laid today by companies such as Ginkgo Bioworks, Intrexon (NASDAQ:PGEN), Synthace, and others. Their goal is ambitious but simple: Invest in people, robots, software, and biological parts today to drive costs down and make the idea of building an internal organism engineering team an economical nightmare (emphasis on robots). Why invest tens or hundreds of millions of dollars into hundreds of employees or dozens of robots when you can use someone else's for a fraction of the cost?

The robots at Tesla Motors are different than liquid handling robots utilized by the organism industry, but they are both on the same level of awesome. Source: Tesla Motors presentation.

While start-ups and established companies in the agricultural, industrial chemicals and enzymes, and pharmaceutical industries looking to corral the incredible possibilities of synthetic biology can leverage the early infrastructure of the emerging organism industry today, companies hailing from Synthetic Biology 1.0 (the term applied to Solazyme, Amyris, Gevo, and other early adopters) had no choice but to develop their own organism engineering capabilities. The results have varied -- as have public disclosures of the results -- but it's difficult to argue against the fact that Amyris has among the most advanced organism engineering capabilities in the industry.

Introducing "Design, Build, Test"
When it opened its doors in 2003, Amyris simply didn't have the option to leverage existing infrastructure to design organisms. The world was just wrapping up the Human Genome Project, which enabled many advances in DNA sequencing, and DNA synthesis (building genes made-to-order) technologies were still not feasible on a large scale. 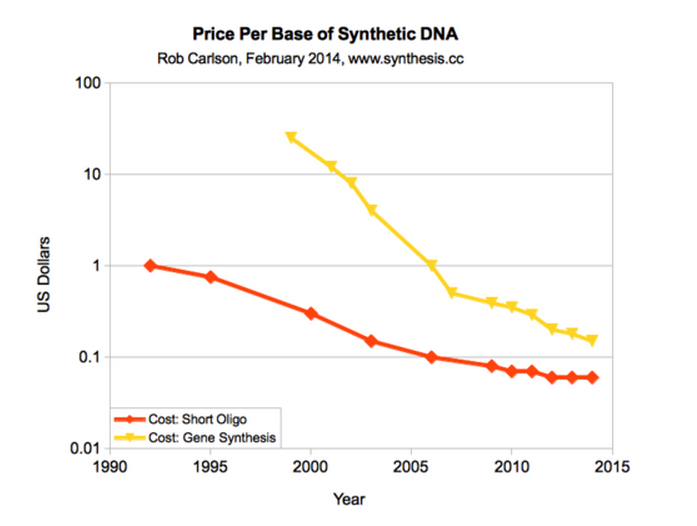 The company also had a strong technology base; having spawned from the lab of Jay Keasling at UC Berkeley and its work on engineering the isoprenoid pathway into yeast, the king of fermentation. There was no tangible infrastructure to support it at the time, but Keasling conjured up the possibility that one day biologists and engineers could sit in front of a computer, design and test a virtual organism, and then build its genome and toss it into a fermenter. Yeah right. Right?

Characterizing biology into a set of basic principles with high predictability is still an elusive endeavor today, so Amyris had to settle with a "Design, Build, Test" process for biology. It was less efficient than the "Design, Test, Build" cycle originally conceived; scientists had to build each organism then test it, but it marked a major advance nonetheless. After designing and building thousands of unique yeast strains, the company is left with the problem of screening them for the most efficient specimens. There are several ways to approach screening, but Amyris has invested heavily in High Throughput Screening, or HTS, which relies heavily on automation (robots), software, and learning at each iteration to drive costs down and compound value over time.

Today, Amyris has one of the most powerful organism engineering and screening platforms in the industry. The company can utilize HTS to screen over 100,000 yeast strains each month, test unique (from a genetic material standpoint) strains in micro-wells, and move the most promising to lab scale fermentation tests. Remember that talk about compounding knowledge from each iteration? Well, Amyris can now predict industrial robustness of a yeast strain at 200,000 liter volumes from 2 liter levels. Heavy investment, process tweaking, and data collection have allowed the company to reduce design costs per strain by 95% from 2009 to 2012.

While built around the production of farnesene, which can be transformed into a range of commodity and specialty chemicals, the same infrastructure can be leveraged for any molecule, such as Amyris' budding portfolio of flavor and fragrance molecules. It's a powerful capability that should not be overlooked by investors. Even if you dismiss it initially, it won't be possible to ignore much longer. As CEO John Melo stated on a past conference call:

Using an intricate cycle of design, build, test, and learn, we are making commercially viable what was once hypothetical production of targeted hydrocarbons from living organisms. Amyris' goal is to build a specific living factory after a single design cycle in a matter of days instead of weeks, or months or in the past, years.

Amyris will continue to create value from its investment in a proprietary "Design, Build, Test" process, but current and future companies will be able to skip the upfront megainvestment altogether. Simply put, Keasling's dream of a "Design, Test, Build" process is closer to reality than you may think.

Hi, My Name is: "The Organism Industry"
The technology industry is insane to me from both a valuation and capital cost standpoint. Consider that you or your crazy Uncle Joe could conceivably sit in pajamas, on a couch, and build a website or mobile app that will generate millions or billions in revenue. It costs you virtually nothing if you have the right tools and requires little outside investment to commercialize and scale. It's lean. Simply reference Angry Birds or Facebook.

Biotechnologies take considerably longer to commercialize, require a jaw-dropping amount of investment and capital, and suffer from a lack of accessible tools from which to start with. It's difficult to conceive a Steve Jobs of the synthetic biology industry building a commercial product (organism) in his or her garage and taking it to investors or consumers. Or, it was anyway.

By switching the "Build" step with the "Test" step, scientists are able to cheaply, quickly, and efficiently learn from mistakes to design the optimal organism for any process. Essentially, the organism industry aims to characterize an organism with lines of software code. That can translate into some incredible possibilities -- such as you sitting in your pajamas, on a couch, and designing a revenue generating organism. No Ph.D required. Think of the explosion in bioeconomy revenue -- already growing at 15% annually -- that can be enabled.

Three things in particular are emerging and combining to make the organism industry possible:

Think it's all hype? Allow me to introduce Tom Knight, an important father of the synthetic biology industry (along with Keasling, Drew Endy, and George Church) that co-founded Ginkgo Bioworks. Knight put his electrical engineering degree to good use at the MIT Computer Science and Artificial Intelligence Laboratory, but foresaw biology becoming programmable and predictable in much the same way transistors were built. So, after teaching himself biochemistry, genetics, and cellular biology, he inspired the construction of the following organism factory at Ginkgo:

Still think it's too good to be true? A lab similar to the one portrayed in the graphic above indeed exists. I've seen it.

Foolish bottom line
What does all of this mean? Does Amyris' HTS platform guarantee success? Absolutely not, but it will continue to drive technology costs and development timelines lower. Even by taking a bigger picture view, we must admit there's a large gap in what we actually understand and need to understand to make biology truly programmable in a highly predictable manner. You may think it's an impossible idea or something that will never happen. That's often how the future works, I suppose. The good news is that the industry has been careful to not hype the potential, and is gradually (or rapidly, relative to your view) turning potential into tangible value: molecules that slash production costs, provide environmental benefits, and return economic value to countries, companies, and consumers. There may be plenty of work left to do, but the organism industry is about to arrive. Get ready.