The backlash that followed General Mills' (NYSE:GIS) decision to make consumers give up their right to sue the company even in cases where harm might be caused by its own negligence was so swift, so severe, that the cereal maker had to quickly backpedal and revert to its previous policy. While it adopted a "But everyone's doing it" defense, General Mills realized it had committed a major public relations disaster that was best abandoned.

Earlier this month, General Mills surreptitiously implemented a new legal policy in which it seemed that virtually any contact with the company -- buying its products, downloading a coupon, subscribing to a newsletter, or, most incredibly, simply "liking" or following it on social media -- required you to give up your rights to sue the company, even if you were hurt by one of its products. Instead, General Mills required you to submit to "final and binding arbitration" that only in rare instances could be reviewed by the courts.

The New York Times outed the company, and the outcry that ensued had General Mills tripping over itself to stamp out the wildfire of protest that erupted, first by carving out a social media exception (the Times misinterpreted the policy, don't you know?) and then saying, the heck with it, it's going back to the old policy completely.

Unfortunately, General Mills isn't being completely honest about its mistake. Instead of saying "We screwed up royally," it is blaming those who called the company out for its policy. Per a company blog posting:

Similar terms are common in all sorts of consumer contracts, and arbitration clauses don't cause anyone to waive a valid legal claim. They only specify a cost-effective means of resolving such matters. At no time was anyone ever precluded from suing us by purchasing one of our products at a store or liking one of our Facebook pages. That was either a mischaracterization -- or just very misunderstood."

What General Mills is saying is, it's not us, it's you. Yet If the binding arbitration clause wasn't trying to force consumers to waive "valid legal claims," then why bother inserting it?

Below are screen captures of General Mills' previously revised policy in which it said that those who voluntarily participated in or engaged with the company, including people who "use or join our site or online community," became bound by those legal terms. So you tell me if it was a "mischaracterization" or that the policy was "misunderstood." 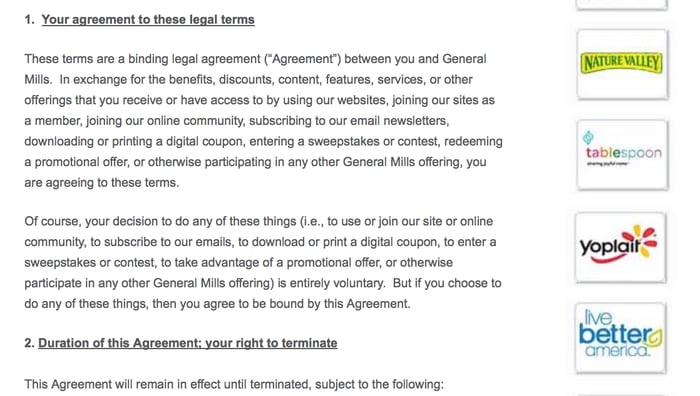 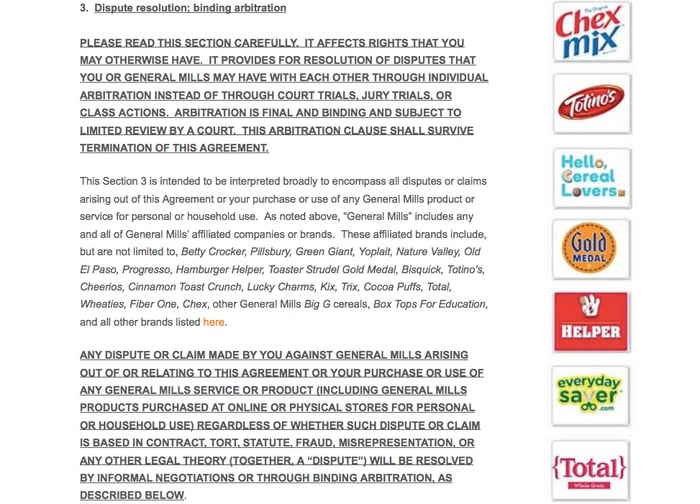 General Mills says it never expected the public to turn on it like it has, and that it is "sorry we even started down this path," which undoubtedly is true. While this #sorrynotsorry attitude suggests chagrin only at getting caught for trying to undermine the rights of consumers, its blame-everyone-but-themselves excuse-making ought to give both consumers and investors pause before deciding whether they should "like" the Cheerios maker once again.

General Mills Says, Sorry, You Can "Like" Us Again @themotleyfool #stocks $GIS Next Article
Current