More data showing a slowing housing market hasn't stopped the Dow Jones Industrial Average (DJINDICES:^DJI) and other stock indexes from charging higher today. The National Association of Realtors said that the pace of existing home sales slowed 0.2% last month to a seasonally adjusted annual rate of 4.59 million, while the Federal Housing Finance Agency said home prices were up just 0.6% in February. That equates to a 6.9% year-over-year rise, which is lower than late 2013.

Nonetheless, the Dow was up 0.55% in late trading. Even housing-centric companies such as Home Depot (NYSE:HD) haven't been affected by these seemingly negative reports.

A slowdown in housing should be expected
One of the dangers of a rapidly rising housing market is a bubble like we saw in the mid-2000s. So a slowdown in growth isn't bad as long as it's not an all-out crash. As you can see below, the current situation is anything but a crash, and housing prices are still up year over year despite the slower pace of sales in the last six months. 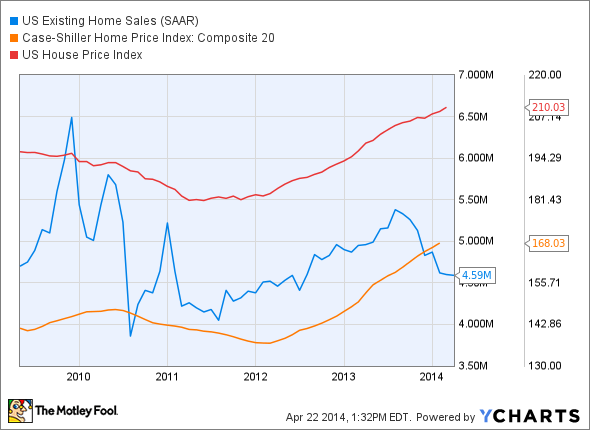 One of the drivers of slower sales is rising interest rates, which make homes less affordable for lower-income buyers. Higher rates have also been expected, so this isn't a shock to the market today.

For home improvement companies such as Home Depot, which was up 2.3% today, the pace of home sales has less impact on sales than the health of the overall economy. They make money from people who are able to spend to fix up their homes, so falling unemployment and rising GDP are also key to their well-being.

In fact, one reason Home Depot is up today is an upgrade to outperform from BMO Capital Markets.

It's important to keep economic data on housing in perspective as reports come out. Slowing sales and a lower rate of home value growth isn't bad if the underlying housing market is healthy. That seems to be the case now, and Home Depot will continue to sell goods to consumers fixing up existing homes. That growth thesis is still intact today.