Please ensure Javascript is enabled for purposes of website accessibility
Log In Help Join The Motley Fool
Free Article Join Over 1 Million Premium Members And Get More In-Depth Stock Guidance and Research
By Tamara Walsh - Apr 22, 2014 at 11:01AM

Forget Texas, Nevada could now be the frontrunner for the Tesla Motors Gigafactory.

Four states are in the running for Tesla Motors (TSLA 4.53%) multibillion-dollar Gigafactory (link opens a PDF), including Arizona, Texas, New Mexico, and Nevada. As much as $5 billion dollars and 6,500 manufacturing jobs are at stake. It makes sense, then, that Tesla is using this massive factory as an opportunity to help convince states like Texas and Arizona to allow the electric-car maker to sell its vehicles directly to consumers in those states. As it stands, Tesla's direct sales model is currently banned in Texas and Arizona.

Texas is a particularly important state for Tesla because it is the second largest and most populous state in the United States. Down the road, it would be hard for the company to achieve its goal of selling 500,000 zero-emissions cars annually without being able to sell its vehicles in Texas. However, despite the obvious benefits for a Tesla Motors plant in Texas, it seems that Nevada could now be the frontrunner in this $5 billion arms race.

Why Nevada?
In an interview with Bloomberg, Matt Hardigree of Jalopnik.com says Nevada is most likely in the lead for Tesla's planned lithium-ion-battery factory. As Hardigree points out, Nevada has a railroad line that connects directly to Tesla's Fremont, Cali., assembly plant. This could play a critical role in the final decision because, ultimately, Tesla will need to transport hundreds of thousands of heavy batteries from the Gigafactory to its assembly plant in California.

Another reason that Nevada seems to make the most sense these days is because the state is rich with lithium pools -- one of the key elements Tesla needs to make its battery cells. In fact, Nevada is the only state in North America with a lithium producing mine today. Lithium demand in this country is growing at breakneck speed, with demand for industry-grade lithium expected to top 320,000 tons by 2020, up from just 102,000 tons in 2010.

These two factors, together with the fact that Nevada is home to the world's largest solar power plant, could make it the new home of Tesla's Gigafactory. Making its massive battery factory both green and self-sustainable to as great an extent as possible is a priority for Tesla. Moreover, the company's chief executive, Elon Musk has already said the plant will be solar and wind powered. While Texas would be a better location for wind power, the arid conditions in Nevada make it ideal for solar power generation. 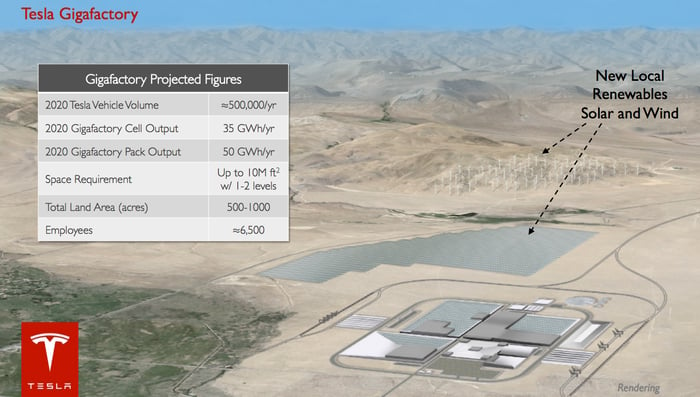 From its direct rail line and lithium mines to the state's sun-filled landscape, Nevada looks like the ideal place for Tesla Motors to build its massive Gigafactory today. Moreover, Tesla needs to make a decision soon if it plans to begin construction on the factory before year's end.