Biogen (NASDAQ:BIIB) remains a market leader in treating multiple sclerosis, an autoimmune disease that affects more than 1.1 million people in the U.S. and Europe.

The company has launched a host of widely successful MS therapies over the past decade, including blockbuster Avonex and Tysabri. However, competition in the form of oral drugs from Novartis (NYSE:NVS) and Sanofi (NASDAQ:SNY) have cut into Avonex's market share.

Given that Biogen has responded to that competitive threat with its own oral drug, Tecfidera, let's take a closer look at the company's first-quarter results. 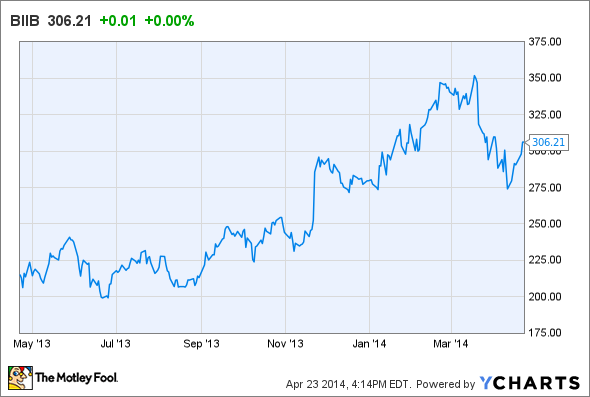 A big, global market
According to Express Scripts, spending on MS medication is going to grow roughly 12% a year through 2016. That's solid growth given that MS is unfortunately already the second most costly specialty drug category, costing insurers more than $46 per member per year in 2013.

The market share leader in MS treatment is Teva's (NYSE:TEVA) Copaxone, an injectible therapy that loses patent protection next month. Teva has been battling to keep generic biosimilars from Mylan and Momenta at bay.

The Supreme Court recently decided it would hear Teva's case, which may insulate it from the generic threat a bit longer. Assuming the FDA OKs it, Mylan could launch its biosimlar before the court reaches a decision; however, if the Court sides with Teva, Mylan would then be forced to pay damages.

Regardless, Copaxone's patent expiration may open a door for market share growth for competing therapies, including newly launched oral MS drugs from Novartis, Sanofi, and Biogen.

Novartis' Gilenya was the first oral MS therapy to win approval, and its first to market advantage led to sales of more than $1.9 billion in 2013.

While those two drugs had a head start at winning market share from prior generation drugs, both face a bigger challenge this year given that Biogen's Tecfidera, which won FDA approval in March 2013, has already become the most widely prescribed oral MS drug in the U.S., and is now launching in European markets.

While Tecfidera was the star of Biogen's quarter, Avonex also posted solid growth after sales were essentially unchanged from a year ago in the fourth quarter of 2013. In the first quarter, sales of Avonex grew from $746 million last year to $761 million.

Biogen's results also benefited from its decision to acquire all the rights to Tysabri from Elan for a little over $3 billion last year. As a result, Biogen now collects 100% of Tysabri's global sales, which totaled $441 million during the quarter.

Earnings miss ... but not to worry
Despite Tecfidera's multibillion dollar blockbuster run rate and a return to growth for Avonex, Biogen's profitability slipped in the first quarter as operating income declined from 36% of total revenue to 31.5%.

The slip in margin contributed to earnings per share that came in shy of Street forecasts. The company reported that EPS grew 25% year over year to $2.47 in the first quarter, but analysts were expecting the company to earn $2.56.

However, investors shouldn't overreact to the earnings miss because Biogen's guidance calls for sales growing 26% to 28% this year, producing EPS of between $11.35 and $11.45. Given that the Street is currently guess-timating for EPS of $11.32, I think analysts should soon be boosting their forecasts.

Similarly, investors should keep in mind that Biogen's balance sheet remains in great shape, with more than $1.26 billion in cash.

Fool-worthy final thoughts
That cash gives Biogen plenty of firepower to help win scripts for its newly approved hemophilia drug, Alprolix. Alprolix won the FDA green-light in March as a factor IX treatment to help control bleeding episodes in hemophilia B patients. Once launched, Alprolix will compete against Pfizer's $400 million a year Benefix.

Given the vast majority of Tecfidera's sales are in the U.S, the fact that Biogen won the drug's approval in the EU in February suggests sales will continue to build overseas as pricing agreements are reached. That should give investors plenty of reason to look beyond the first-quarter earnings miss.