Please ensure Javascript is enabled for purposes of website accessibility
Log In Help Join The Motley Fool
Free Article Join Over 1 Million Premium Members And Get More In-Depth Stock Guidance and Research
By Justin Loiseau - Apr 24, 2014 at 11:44AM

Layoffs around Easter may have added to the increase.

Initial U.S. jobless claims rose 7.9% to 329,000 for the week ending April 19, according to a Labor Department report released today. The gain likely reflected temporary layoffs in the week before Easter. Applications can be volatile around Easter, because many school systems temporarily lay off bus drivers, cafeteria workers, and other employees during spring break.

After edging up a revised 1% the previous week following a 9% drop the week before, this latest report deals a blow to April's employment improvements. Analysts had expected an initial-claims increase, but their 313,000 prediction proved overly optimistic. 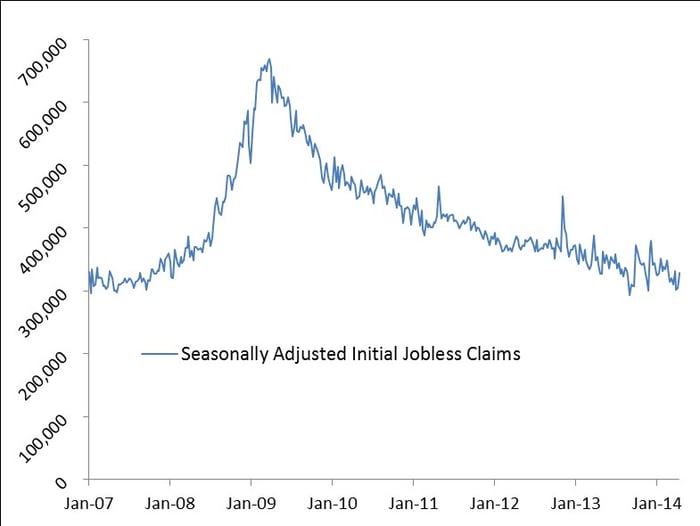 From a more long-term perspective, a 1.5% increase in the four-week moving average to 316,750 initial claims fully removed the previous week's 1.5% decrease. Despite these lackluster numbers, both the latest week's claims and the four-week average fall significantly below 400,000, a cutoff point that economists consider a sign of an improving labor market.

On a state-by-state basis, Oregon, Georgia, and Ohio recorded decreases of more than 1,000 initial claims for the week ending April 12 (most recent available data). While Oregon and Ohio didn't provide any comments for their respective declines of 2,240 and 1,010 claims, Georgia pointed to fewer manufacturing layoffs as the main reason for its 1,600 drop.

For the same period, six states registered increases of more than 1,000 initial claims. California's claims jumped the most (9,210), due primarily to services sector layoffs.

About 2.9 million people received benefits in the week that ended April 5, the most recent period for which data are available. That was about 85,000 fewer than in the previous week.