Eagle Rock Energy Partners (NASDAQ: EROC) announced last night that it was suspending its distribution. This was clearly not news that the company's investors wanted to hear, and shares were down by 15% in morning trading. Let's look at what happened and what investors can expect from the company in the future.

Transformation on pause
Eagle Rock Energy Partners is on the path to becoming a pure-play upstream energy company alongside peers such as BreitBurn Energy Partners (OTC:BBEPQ). However, it first must complete the sale of its midstream business to Regency Energy Partners (NYSE: RGP). That deal hit a snag when the Federal Trade Commission requested additional information and documents. In order preserve liquidity while it waits to close the deal, Eagle Rock made the tough choice to suspend its distribution.

The master limited partnership's plan is to hold a unitholder vote next week to approve the sale of its midstream segment to Regency Energy. However, it is still waiting for approval from the FTC before that deal can close. Because the time frame is now extended, the company needs to preserve liquidity so that it can fund its growth capital spending plan and meet other financial obligations. Meanwhile, the company's debt is piling up, which could force it to seek amendments to its credit facility.

The light at the end of the tunnel
There are two pieces of good news in the midst of the disappointing distribution suspension. First, the company plans to resume distributions as soon as the midstream business is sold. Furthermore, its underlying operations are showing some improvement. The company said in a press release that first-quarter results for adjusted EBITDA and distributable cash flow should be slightly above what it reported in the preceding quarter.

Once the midstream deal closes Eagle Rock Energy Partners will see a vast improvement in its liquidity position and its total debt balance. That will enable the company to focus all of its attention on becoming a pure-play production company. It will then be able to better compete with the likes of BreitBurn Energy Partners for accretive oil and gas acquisitions. As with BreitBurn, the company can also invest to organically grow production.

While BreitBurn is focusing its organic growth in the Permian Basin, Eagle Rock has a compelling position in the liquids-rich areas of Oklahoma, as the following slide shows: 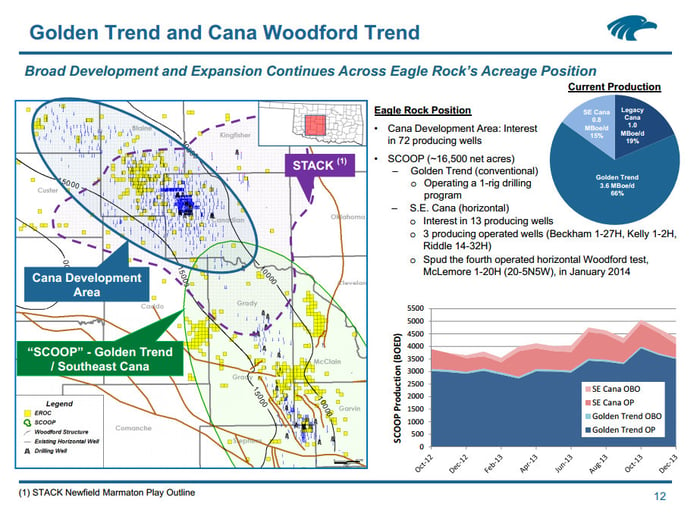 Eagle Rock Energy Partners' promising position consists of about 16,500 net acres in two areas that are now being developed horizontally. This position is the near-term key to the company's ability to produce a stable and growing distribution for its investors. In the meantime, Eagle Rock needs to preserve capital so that it can fund growth in Oklahoma as it waits for the capital from the midstream sale to Regency Energy Partners.

Investor takeaway
While the distribution cut at Eagle Rock Energy Partners is tough for investor to take, it is necessary. The good news is that there is a light at the end of this tunnel. Completing the midstream deal will give the company the capital to fund its liquids-rich growth in Oklahoma, as well as to begin making accretive acquisitions. That said, while the suspension isn't the end of the world, there are better companies to own in this space.