Cummins (NYSE:CMI) shares have had a remarkable run since February, tacking on 11% since a bunch of analysts upped their price targets after a solid set of fourth-quarter numbers from the engine maker.

So with its first-quarter earnings report arriving early next week, is another surprise in store for Cummins investors? Situations look favorable, what with key customer PACCAR (NASDAQ:PCAR) projecting a 5% jump in its Q1 truck deliveries and long-standing partner Westport Innovations (NASDAQ:WPRT) even calling 2014 the "breakthrough year in heavy-duty trucks in North America."

But while Cummins' top- and bottom-line figures may impress, here are three key metrics that you should watch in the earnings report scheduled for Tuesday, April 29, to help you decide your future course of action.

Hold over the market
For a company that's known for its engines worldwide, maintaining market share remains a top priority. Cummins' projections during its last earnings call gave investors a lot to think about -- it expects to capture 38% market share in the North American heavy-duty truck engine market this year, while hitting the 70% mark in the medium-duty segment. Put better, the company expects its heavy-duty share to drop a percentage point, while its medium-duty share climbs 10 percentage points compared to 2013.

While a 70% share in the medium-duty market should make any investor drool, it's worth noting how PACCAR's new 13-liter engine is proving a tough nut for Cummins, especially as it tries to build a market for its 12-liter engine, made in partnership with Westport Innovations. The ISX 12G was launched only last year, so 2014 will essentially be the year that decides whether the engine can taste success. Naturally, if PACCAR's engines distract customers, that doesn't bode well for Cummins or Westport.

So in Cummins' upcoming earnings call, keep an eye on two things: Whether the company reiterates its market share projections and whether it provides any further insight into how PACCAR's growing engines business could affect its own sales. These should be critical pieces of information for any long-term Cummins investor. For the near term, though, the market should applaud if Cummins maintains its market share targets next week.

Are margins growing?
Analysts project Cummins' Q1 earnings per share to climb 17% year over year on 6% higher revenue. While that suggests improved margins, the company's margins, interestingly, aren't expanding as expected. For 2014, Cummins previously projected its revenue to grow between 4% and 8%, but expects a small 0.75% improvement in operating margin (to 13.25%) even at the higher end of the range.

In fact, I'm expecting the company's Q1 operating margin to drop slightly year over year on weaker seasonal sales of high-horsepower engines to mining and power-generation industries. Considering that Cummins missed its margins target last year, its projections for 2014 are anyway on the conservative side. Naturally, a substantial drop in margins in Q1 could put tremendous pressure on the company's bottom line as the year progresses. So keep an eye on where Cummins' margins are headed. Any positive signal could send share higher next week.

How much can you earn out of Cummins? 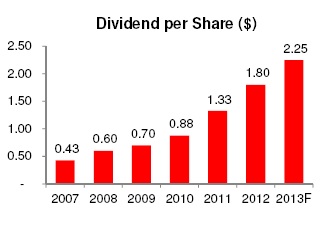 If you don't know how much cash flow a company is generating, you'll probably not know what returns to expect as its shareholder. Cummins generated record operating cash flow worth $2.1 billion last year. While reinvesting a part of it into its business, Cummins plans to return 50% of that cash to shareholders in the form of dividends and buybacks.

So if the company projects higher cash flows for 2014, you can expect greater returns. Cummins increased its dividend by 25% last year, and greater cash flow could mean another hike this year. So make sure you don't miss what the company has to say about its cash flows and how it plans to use them in its upcoming earnings report.

The Foolish bottom line
Cummins is continuously designing products that meet stricter emission standards across the globe. China, for instance, presents a massive opportunity for 2014 on the heels of the NS IV emission norms. So Cummins' product pipeline for the year, which should be discussed in length in its upcoming earnings call, could reveal a lot about how well it is poised to tap those opportunities. And that's where investors should focus, instead of reading much into whether the company misses or beats Street estimates next week. Stay tuned for more analysis on Cummins' earnings and its future plans.