Even though it delivered revenue and earnings results for the first quarter of its 2014 fiscal year that fell shy of analysts' estimates, shares of McDonald's (NYSE:MCD) remained relatively unchanged on April 22. While this lack of investor disappointment might signify a brighter future for the world's largest restaurant chain, is it possible that Mr. Market is underreacting to news that could potentially devastate the business and help competitors like Chipotle Mexican Grill (NYSE:CMG) and Panera Bread Company (NASDAQ:PNRA)?

In Europe, business rose on better sales in the U.K., France and Russia but this was partially offset by a weak performance in Germany. McDonald's also reported solid metrics across most of its APMEA segment but the company was hurt by poor sales results in Japan, while its U.S. business was hit by poor winter weather and "challenging industry dynamics".

From a profitability perspective, the fast food giant did even worse. For the quarter, management reported earnings of $1.21 per share. Mr. Market had hoped to see $1.24 and the result was a whopping 4% lower than the $1.26 the company saw last year. Although it benefited from higher sales and share buybacks, the company's earnings per share dropped because it received less tax benefits this year and it was hurt by foreign currency fluctuations.

Are "challenging industry dynamics" code words for stronger competition?
Over the past five years, McDonald's has had a pretty impressive run. Despite its massive size, the fast food king saw its revenue jump almost 24% from $22.7 billion to $28.1 billion. However, as other companies have come into the picture its sales growth has slowed considerably. Between 2012 and 2013, the company's sales rose just 2%. It saw a 12% increase between 2010 and 2011 and a 6% increase in the year before that. 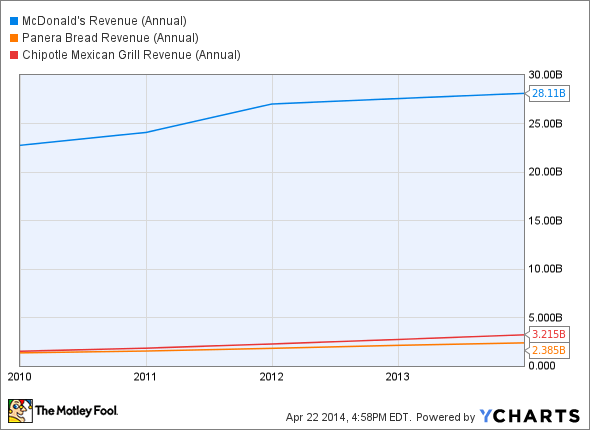 In part, this slowing of sales may follow from the company's size, which makes growth more challenging, but it may also be chalked up to fast-casual chains like Chipotle and Panera coming onto the main screen. Over the same five-year period, Chipotle's revenue soared 112% from $1.5 billion to $3.2 billion, while Panera's sales rose 76% from $1.4 billion to $2.4 billion. Both companies have seen their revenue explode because of a strong combination of comparable-store sales growth and increased store counts.

In terms of profits, McDonald's has seen its performance come in slightly lower with its net income increasing 23% over the past five years. This increase in profits has been driven by the company's revenue gains but it has been somewhat offset by a 35% rise in taxes. In contrast, both Chipotle and Panera did significantly better than McDonald's over this period. 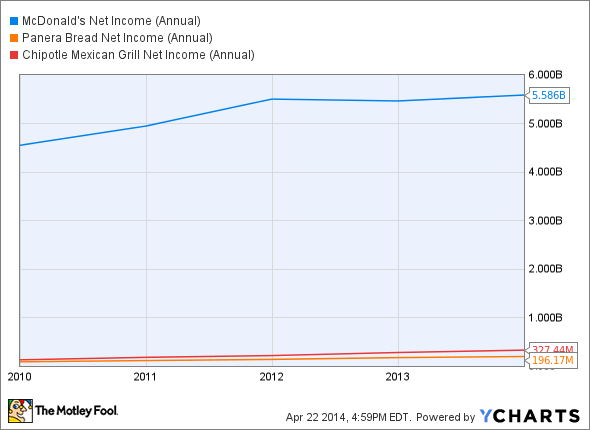 Chipotle did even better during this period. Between 2009 and 2013, the fast-casual sensation saw its net income soar 158% from $126.8 million to $327.4 million. Like Panera, Chipotle's jump in profits primarily resulted from its sales growth, but the company also benefited from its cost of goods sold declining from 75.1% of sales to 73.4%.

Foolish takeaway
Based on the data provided, it looks like McDonald's had a quarter that could be summed up as modestly disappointing. It fell short of Mr.Market's revenue and profit estimates. While it's possible that the company could attribute its poor performance to weather, increased domestic competition from fast-casual diners like Chipotle and Panera provides the most probable explanation for the shortfall. If this is the case, investors can probably expect to see more pain ahead for the fast food giant and this could mean attractive prospects for its smaller rivals.