Big money can be made in owning promising pipelines, but only if trial data validates the hope. In the case of Cytokinetics (NASDAQ:CYTK), hope was dashed when the company reported its drug for ALS, also known as Lou Gehrig's Disease, failed to meet its primary endpoint in Phase 2 trials.

Given shares have fallen more than 60% in the wake of the revelation, let's take a closer look and see where the company may be heading from here. 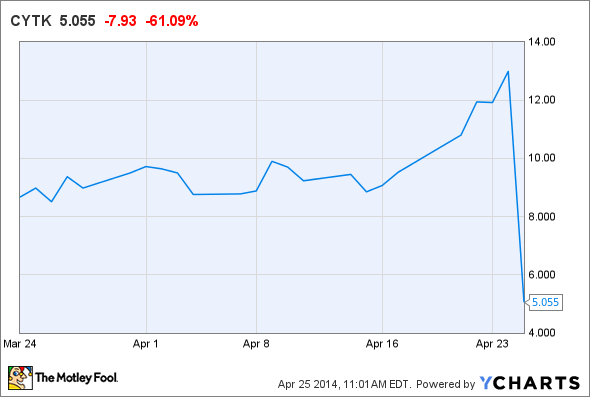 First, a bit of background
Amyotrophic lateral sclerosis, or ALS, is a tough-to-treat disease in which patients lose the ability to control their muscles due to a degeneration of nerve cells associated with signaling muscle activity. Eventually, the loss of muscle control can progress to paralysis and an inability to swallow and breathe.

While ALS isn't widespread, roughly 25,000 people are living with the disease in the U.S., and more than 5,000 new cases are diagnosed each year. Currently, there is no cure for the disease, and sadly, most patients die within five years of diagnosis.

Currently, treatment options are limited. One of the most widely used drugs is Sanofi's Rilutek/riluzole, which was approved in 1995 and has been shown to slow disease progression. Otherwise, few drug developers have had success in developing new, next-generation therapies.

In steps Cytokinetics
Based on promising results in pre-clinical and phase 1 trials, Cytokinetics advanced tirasemtiv, its ALS drug, into phase 2 trials in 2011. That drug, a skeletal muscle activator, increases muscle sensitivity to calcium, resulting in increased skeletal muscle force and delaying muscle fatigue.

The news of the failure was especially disappointing to patients and investors given the company had presented double blind aggregate data in December at an ALS symposium that it said during its fourth quarter earnings conference call was "well received by conference attendees."

As a result, investors are heading to the exits, particularly given tirasemtiv also showed mixed results in meeting secondary endpoints including muscle function and muscle fatigue.

While Cytokinetics will likely be poring over the data in hopes the compound can be salvaged, the failure forces investors to focus on the remaining products in the company's pipeline instead.

Collaborations under way
Tirasemtiv was the only one of Cytokinetics' three drugs under development to lack a well-heeled partner. The other two drugs in Cytokinetics' pipeline are being co-developed with either Amgen (NASDAQ:AMGN) or Japan's Astellas (OTC:ALPMY).

Amgen is working with Cytokinetics on omecamtiv mecarbil, a drug for the treatment of heart failure, a chronic condition responsible for the hospitalization of more than 1 million people in the U.S. every year.

Omecamtiv mecarbil is currently in phase 2 trials seeking to demonstrate that the drug can boost heart muscle function and reduce hospital readmission.

Amgen initially signed on for an option to work with Cytokinetics on the drug in 2006 when it paid the company $75 million upfront. Amgen executed that option in 2009, handing over another $50 million and taking on responsibility for development and commercialization in exchange for global rights to omecamtiv.

Overall, Cytokinetics may receive up to $600 million in milestones from Amgen and double digit royalties if the drug ever reaches the market.

More recently, Astellas inked a collaboration deal with Cytokinetics last summer for the development of CK-107.

However, since CK-107 is only in phase 1 safety studies, and it's a skeletal muscle activator like tirasemtiv, so it's unclear if tirasemtiv's failure casts any doubt on whether CK-107 can improve muscle function in non-neuromuscular disease patients suffering from muscle weakness and fatigue.

Fool-worthy final thoughts
Shareholders suffering losses tied to tirasemtiv's failure need to hope that phase 2 data for omecamtiv mecabril will be compelling enough for Amgen to continue developing it.

Unfortunately, investors will have to wait longer than previously hoped for that data given that Amgen and Cytokinetics amended the phase 2 trial last fall. Those amendments include a dose-escalation in the 50 mg cohort, an extension of treatment duration from 12 to 20 weeks to accommodate the dose escalation, and an increase in the trials patient population.

If omecamtiv mecabril fails too, Cytogenetics will be years away from commercializing any drugs tied to its collaboration with Astellas.

Since the company reported roughly $80 million in cash on its books at the end of 2013, or roughly 16 to 18 months of cash burn, there are just too many question marks remaining for Cytokinetics for me to consider investing in it. That suggests investors may be better served avoiding shares until they get more insight into omecamtiv's mid stage trial.

Is There Value In Cytokinetics Following Its 60% Drop? @themotleyfool #stocks $CYTK $AMGN $ALPMY Next Article
Current