The battle over Bob Evans Farms (NASDAQ:BOBE) is reminiscent of others taking place at casual-dining restaurants that have found themselves at odds with the activist shareholders in their ranks, and the family dining chain is finding itself once again having to square off against Sandell Asset Management, which wants to replace virtually the entire board now with eight candidates of its own.

Amid an industry in tumult, investors are growing restless with sustained restaurant underperformance and are agitating for change. No longer satisfied with the leisurely paced casual-dining experience, consumers now typically expect faster service and higher-quality, fresher ingredients in meals made to order.

According to the market researchers at NPD Group, fast-casual chains once again outpaced the rest of the restaurant industry's unit growth in 2013, expanding the total number of locations open by 6%, compared to a 1% decline in the number of casual, midscale, family, and fine-dining establishments. And where total industry traffic was flat year over year, the fast-casual segment was the only one experiencing growth, rising 8% from 2012.

Over the past five years, Bob Evans, Darden Restaurants, and Ruby Tuesday have substantially lagged behind the growth of both Chipotle Mexican Grill and Panera Bread, which helps explain why both Bob Evans and Darden, the owner of Olive Garden and Red Lobster, are facing significant pushback from activist investors. Ruby Tuesday itself had a new management team installed last year at the insistence of such shareholders, though results haven't quite turned out as planned. Over the last nine months, sales are down 8% from the year-ago period while same-restaurant sales have been negative over the last three quarters, and it remains a very troubled chain. 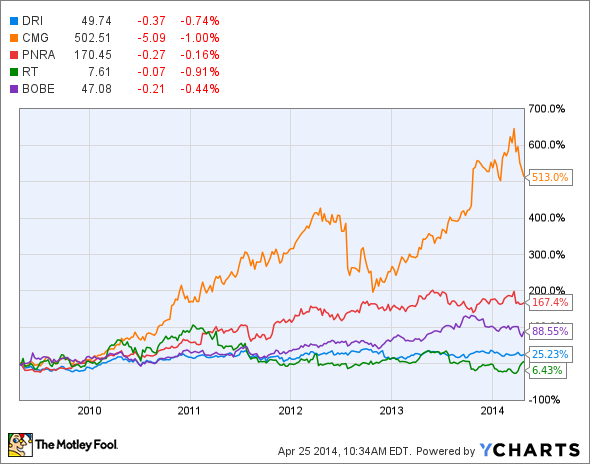 Sandell Asset Management challenged Bob Evans last year with a proposal for the restaurant chain to shed its packaged food division, BEF Foods, which the private equity firm contended was causing the chain to sell at a "conglomerate discount." It wanted Bob Evans to become a pure-play restaurant stock with a simplified corporate structure and a significantly reduced share count.

Earlier this year, it filed a lawsuit against the restaurant, charging that the board stripped shareholders of their rights by unilaterally adopting an 80% supermajority requirement to amend the company's bylaws .

Perhaps realizing the optics of the change were not to its benefit, Bob Evans backpedaled to its prior simple majority rule and Sandell dropped the lawsuit. Even so, the two sides remain at loggerheads over the future direction of the restaurant, which still maintains it can do better by keeping its operations together. It said on Friday that it had "thoroughly vetted" Sandell's proposals but ultimately found they amount to little more than "financial engineering that would jeopardize the Company's ability to build long-term value."

With its own filing on Friday, Sandell reiterated that it is still pushing forward on splitting the company in two, saying there are no synergies realized between the two divisions and charging that there are no truly independent members on the board. The only way to shake the restaurant out of its stupor is to clean house, it says, and Sandell is putting forward candidates that are both industry veterans and the type of financial engineers Bob Evans railed about.

There are deeper issues than just operating a packaged foods business as the root cause of Bob Evans Farms' problems, but Sandell Asset Management makes a compelling case that change is needed. With the restaurant industry in a state of flux, a new direction could be the wake-up call investors have been looking for.